The last time I saw Phil Steele, he had two good reasons not to be cheerful.

It was outside the East Stand of the Stadium of Light that we spotted each other before, as I recall, another dismal Sunderland home performance. And Phil was by then in a wheelchair, having progressively deteriorated under the cruel affliction of multiple sclerosis.

Despite the football, and despite his disability, he was in high spirits, glad to be out and about and happy to see a friend from afar.

Yesterday, Jan 6, came the news I’d been dreading for months as updates arrived from Phil’s wife, Carol, about his worsening condition. “Just letting you know that my dad - Philip Steele - passed away on Monday night,” wrote their daughter, Carrie, a singer and voice coach. 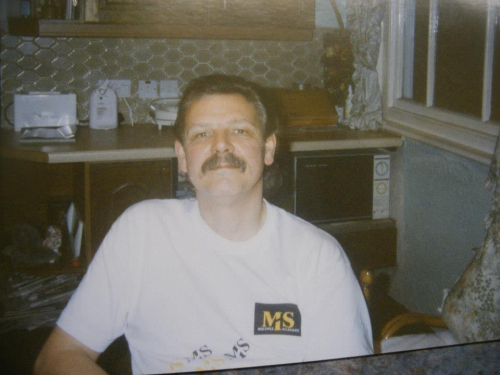 Phil was 70. He and I grew up five streets or so apart in Shildon, Co Durham.

We came to share a passion for music and Phil was a key part of our little group organising the Sunday night folk club in the Aclet, Bishop Auckland. He was a talented guitarist, at home with folk and blues but with broader tastes, too. I remember him being stopped in his tracks by Tony Peluso's fabulous guitar solo on the Carpenters' Goodbye to Love.

Each Sunday Phil would play and sing as easily the pick of our "floor" artists, resident musicians who preceded and punctuated the two slots reserved for the paid visiting guest performers. He also did all the the other things associated with running a folk club, from tidying up the tables and chairs at the end of the night seating to persuading his parents to find a spare bed for his share of guests.

A significant tragedy of his illness was that it struck him when he was relatively young and eventually made guitar playing impossible.

There is always an element of relief when a friend or relative passes away after much suffering. I know from re-reading Carol's messages how difficult this became for both of them. But Phil deserved a much better deal from life and I shall never forget our friendship, however distant it became.

(April 2021 update): Carrie was moved by a reference at the Salut! Live Facebook group to the tremendous Richard Thompson song Dimming of the Day to mention that it was one of her dad's favourites, and hers too. Her a cappella version can be found at her own site using this link.  It is a fitting song given the circumstances and, whenever it was recorded, can be seen as a daughter’s fitting and heartwarming tribute to her dad.

I may update this appreciation further but will, for now, reproduce a piece posted here 13 years algo together with Phil's response: ... 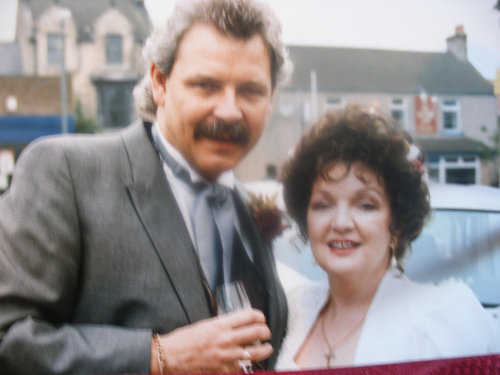 Who wanted to be a folk singer? Professionally, I mean, not just getting up, as many of us did, to do floor spots at the local folk club.

But the will was there, as I was reminded when poring over old letters that passed between my (then) future wife and me.

One of these bears no date, but the contents make it clear that it was written when I was still living in Shildon and Joëlle was back at home in Le Mans.

It began with some waffly excuses for not writing enough. Later I revealed a modest improvement in my parlous financial position; my boss, the editor of the local paper where I worked, had said I could start charging all of £1.50 a week in expenses for writing a folk column.

Then these words appeared: "Also, folk music looks like beginning to pay me. Phil Steele and I have a booking a Guisborough on Jan 29. We'll get £8 inclusive."

You may not think that amounts to much. But I am talking about prehistoric times, 1971 to be precise. And a half share of £8 went a long way in those days, as did even 30 bob.

Why, I even posted something at Mudcat suggesting that I used to get away with paying Vin Garbutt £3 at my own club, though that would have been a little earlier.

Phil was the driving force behind this emerging duo of ours. He played guitar exceptionally well and had a reasonable voice and an interesting trad, blues and contemporary repertoire.

He did his best in the days leading up the gig to draw me sufficiently into his world so that we would look as if we knew roughly what we were doing.

But in strict observance of the rule that you can take a horse to water but cannot make it drink, none of his efforts could prevent this being my one and only professional performance.

But he does remember that the venue was a pub called the Globe.

My letter described it thus: "It's supposed to be a hard club in which to sing, so it will certainly be a challenge."

As you say,Colin, my memories of our one & only gig are extremely hazy, to say the least. I do remember that bloody jukebox though, as we had to ask for it to be turned off before I went on with the Neighbourhood Blues band in the late 80s! We definitely played San Francisco Bay Blues & did well to escape at half time - Christy was a far better choice for the rest of the night than The Globe. 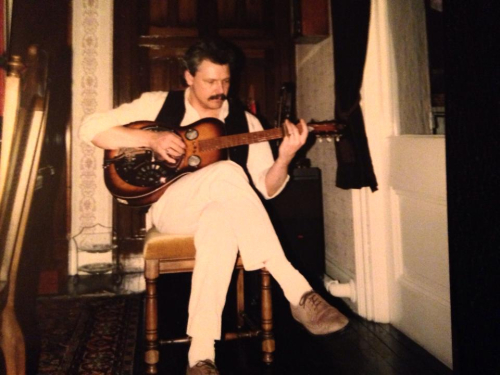 Rest peacefully, Phil, and deepest condolences to the family. He leaves his wife Carol, two daughters (Carrie and Vicki), and a son, Lee. Carrie's fiancé Alex would by now have been his son-in-law but for wedding cancellations due to Covid-19. He had a grandson, Sam, and a great granddaughter, Lola.

* I have selectively added comments seen on social media. I hope that is OK with those who posted them.

Not entirely unexpected, I guess, but so very sad. I remember Phil always opening the second half of Sunday nights at the Aclet and also how blown away I was when I first met him and heard him play. He was treated very cruelly by life but, as you say, made the best of what he had. He deserves now to rest.

That is a lovely tribute Colin.

Although I didn’t know of Phil, I do share both his name and his love of folk music.

From your writing it seems that he lived a good and full life despite its challenges.

Thank you for sharing. #RIPPhil

Thank you so much Colin...this has made me laugh so much imagining my Dad at that gig!

Farewell my old friend. Keep picking your old Gibson. A balm for the soul.

Oh Carol, what sad news. I remember you both renewing your wedding vows; and all of us having such fun nights out together when I was still in the North East and he was my accountant. A wonderful man. Stay brave and stay safe.

We are so sorry to hear this very sad news your dad, Carrie. Phil was a special man
A gent who faced everything that was thrown at him with dignity and strength.
He will be missed so sorry for your loss.
Our love and prayers to you and your Mam.

That’s a great salute to Phil. I was a fellow member of Neighbourhood blues and indeed he was a good guitar player especially on slide guitar. This was clear on Steele Blues on one of our albums in the 80s. The strange thing is I don’t recall ever hearing him sing solo.