Salut! Live wishes readers as happy a new year as Covid and Brexit permit and thanks you heartily for taking the trouble to visit the site in such large numbers ...

Six seemed a perfectly good number on which to end Salut! Live's series on Music from North Eastern England.

But even half a dozen instalments of manageable length cannot hope to cover all the ground given how rich a source of songs and tunes the region is.

And I realised with a slight shudder of shame that my only reference to the great Tommy Armstrong, variously known as the Pitman Poet,  the Pitman's Poet and the Bard of the Northern Coalfield, was initially erroneous (I mistakenly credited him with authorship of Cushy Butterfield). 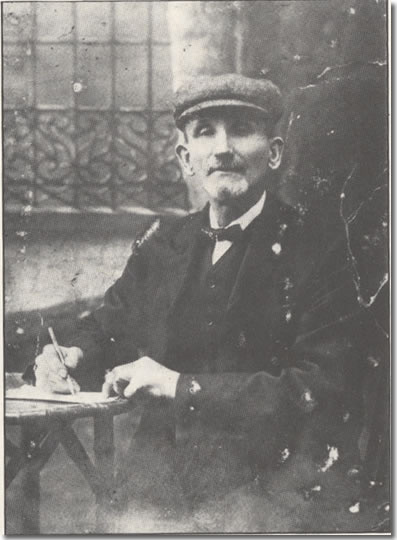 I was neither surprised nor indignant when Rolling Stone magazine, promising a line-up of the 100 Greatest Songwriters of All Time, found room for plenty of people I did not recognise as masters of the art, and others I did not recognise at all, and not even ninety-something for Armstrong.

Too niche, the editors would say, and anyway we had John Prine and Woody Guthrie in the list and put Bob Dylan top so folk wasn't squeezed out altogether.

But those who frequent this site know better.

Thomas Armstrong, born on Aug 15 1842 in Shotley Bridge, had challenging origins, left severely bow-legged by rickets and eventually forced to use a walking stick.

He was, however, an uncommonly gifted wordsmith whose descriptions and depictions of North-eastern life covered the darkest tragedy, the miseries inflicted by coalowners and the unprincipled, thuggish enforcers they employed and - for levity - tales of drink-fuelled shenanigans.

Armstrong's songs and poems reflected his own experiences of working from the age of nine in pits across North West Durham, the area where I began married life. He also responded to important local events - strikes or lock-outs, of course, and the despicable practice of applying "off-takes", often spurious pretexts for reducing a miner's already paltry wage.

He wrote about a charabanc crash on Long Close Bank at Medomsley, near Burnopfield, killing 10 members of a choir from Consett. And he recounted the murder of a 10-year girl in Stanley by a man lodging with her family (he was hanged in Durham Prison, an institution that also inspired one of Armstrong's best known songs, based on imagination rather than personal acquaintance). Mostly, though, he wrote about miners, their families and their struggles.

The folklorist A L Lloyd wrote: “We are concerned here with one of the most remarkable creators of English worker’s song ... as a rule too local in spirit or language to spread far outside the north-eastern coalfield. His output of militant strike songs and disaster ballads was considerable, written to raise money for union funds or the relief of widows and orphans.”

Lloyd was an ardent Communist. Armstrong was as impassioned a militant but on behalf of his community, not an ideology. While he attacked the "masters" and their hirelings, it was because they were, to be blunt, uniformly wicked and deserved it. His  was not a political crusade but a humanitarian one. And he got things right: a notorious "keeker", the surface official in charge of measuring miners' tubs of hewn coal and making deductions for excessive stone content, was laughed out of court when he sued for libel. Armstrong had called him a "hairy-faced rascal" with "no feeling for the men that’s below".

From the indispensable website pitmanpoet.org.uk, in an informative biography that might benefit from a quick professional edit, come Tommy Armstrong's own words:

'When ye're the Pitman's poet an' looked up to for it, wey, if a disaster or a strike or a murder goes by wi'oot a sang fre ye, the’ say: “What's wi' Tommy Armstrong? Has someone druv a spigot in him and let oot a’l the inspiration?  Me aad sangs hev kept me in beer an' the floor o' the public bar hes bin me stage for forty years. Aw'd sing, we’d drink, aw'd sing, we'd drink agen, sangs wi'oot end, amen.” 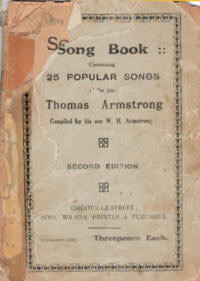 Tommy Armstrong's priceless prose became songs when put to Tyneside musical hall tunes, Irish and Scottish airs and popular melodies of the age. He'd sell broadsheets for a halfpenny or penny a time to raise a bit of beer money and, often enough, to aid a worthy cause.

A songbook containing 26 of his works was published but he is thought to have written more than 150, many of them lost for ever. I have chosen to feature three and am making this, additionally, the 54th instalment of my Cover Story series because I include two versions of that rarity, a Tommy Armstrong piece that entered the mainstream, the Trimdon Grange Explosion.

On Feb 16 1882, an explosion caused ghastly loss of life among men and boys, several aged 12-14, at this south Durham pit and the neighbouring Kelloe mine into which poisonous gas was forced  by the blast. The commonly quoted figure is 74, including the six at Kelloe. The subsequent inquest identified ample cause for concern about the working practices that had prevailed, but no grounds for prosecution.

Many artists have covered the song, which Armstrong couched in non-dialectical terms to maximise its appeal beyond the North East and therefore its capacity to raise funds for the widows and orphans. He performed it a few days after the disaster in what must have been an unbearably emotional gathering at the Trimdon Mechanics' Hall.

Of the many versions I’ve encountered - and how I’d love to have heard the author sing his own noble words - the Unthanks stand out a mile from almost all. The Brighouse and Rastrick brass band’s arrangement for the first and last verses seems at first altogether too chirpy but the women’s voices strike an instantly melancholy note and Rachel Unthank’s lead vocals are hauntingly divine.

Martin Carthy offers a worthy interpretation and the Mekons attract some praise for theirs. But step forward Alan Price, the Jarrow lad and former Animal who won broader attention for the song.

His jazzy approach would not suit all tastes but greatly pleases mine. And there’s a good reason why his singing of this heartrending lament could hardly be more dignified and heartfelt.

Some years ago, when I interviewed him for a Sunderland football fanzine, Price told me of the death of his own father in a North-eastern workplace accident. A chargehand at British Oxygen, he was killed when a cylinder blew up as he carried it to safety during an emergency.

“My dad died a hero,” Price told me. A fine singer’s empathy with the subject matter of the song lifts this version to the lofty heights of Salut! Live’s favourite.

The South Medomsley Strike has been called the greatest coalfield song to be written. It recalls a particularly bitter dispute in 1885 when the owners brought in "candymen", a bunch of louts rounded up by a fellow named Postick, to evict strikers and their families from their miners' houses.

Plenty of singers do it justice, No one does it better than the High Level Ranters, joined by Dick Gaughan and Harry Boardman

Readers unfamiliar with the dialect should still get the thrust of the chorus:

The miners of South Medomsley they 're gannin te mek some
stew
They 're gannin' te boil fat Postick and his dorty candy crew,
The maistors should have nowt but soup as long as their alive
In memory of their dorty tricks in eighteen eighty five.

My final choice from the formidable catalogue of Tommy Armstrong songs is The Row Between the Cages in which he imagines a fierce battle for supremacy between the old and the new, the cages used to transport men between surface and coalface. It's clever and fun; Lloyd called it an "isolated masterpiece amongst British mining songs".

Since I leave you with this clip, I am going for something of a novelty version rather than those available from such towering figures of the region's folk scene past and present as Bob Davenport, Lou Killen or Bob Fox and Stu Luckley.

The Whisky Priests famously or infamously gave a charge of ruffianlike exuberance to most of their repertoire, charming up to a point in a way that the Mekons' post-punk treatment of the Trimdon Grange Explosion was not. And here, I believe, it works.

There you have a snapshot of the life and times of Tommy Armstrong, who reached the age of 72, fathering 14 children from the first of his two marriages before he died in 1920. Perhaps the omission from Rolling Stone's list was justified; he wrote the lyrics of his songs, but not the tunes. But the Pitman('s) Poet damned well deserved better than to end his days penniless in Havelock Terrace, Tantobie.

This may sound like sour grapes but I wonder if Tommy Armstrong would have attracted more national/international notice if he'd been from the south rather than the northeast.
Hard to compare the Unthanks version of The Trimdon Grange Explosion with Alan Price's, they're so very different. But both splendid in their own way. Martin Carthy's is, as you say, worthy. But Martin Carthy almost always leaves me wanting more.
Price's approach to the song was, to say the least, audacious. But he brings it off wonderfully. And, though I don't think it's been recorded, he was capable of a very different and spinechillingly beautiful rendition. I saw him do this to close a solo concert at Avery Fisher Hall (now renamed David Geffen Hall) in New York in the mid 1970s. He got up from the piano, thanked the audience, told them he was really missing his home and then delivered The Trimdon Grange Explosion acapella. Brought the house down. Far and away the best version I've ever heard.

Marvellous, Colin, excellent. Thank you. Animal Tracks was the second LP I bought: August, 1965, with 10 bob earned as a reward for scoring all 7 O-levels. Their Road Running Man, the last track, has played in my mind for more journeys than I can count, but sadly the LP is long gone, and I cannot find that song anywhere! Happy New Year, and Salut!

I wonder, Bill, at the thought process and/or discussions that led Tommy to avoid dialectic in that one song. Was it his decision? Did someone say it'll raise a lot more for the widows and orphans if you do? In the modern age, there'd be such advice on tap but this was 1885 ....

Dave Bowman pointed out on Twitter that while Alan price sang about Jarrow, he was from Fatfield. So was I accurate in describing him as a Jarrow lad, Dave wondered. We’re both right. He is from Fatfield but was still a boy when the family moved to Jarrow and he attended Jarrow grammar school.