Kissed her once again at Wapping

After that there was no stopping

Those lines, which delight some listeners and strike others as embarrassing,  were not to be found in the original lyrics of Sweet Thames, Flow Softly.

Arguably one of Ewan MacColl's most beautiful songs was written for a schools project that reinvented Romeo and Juliet in a contemporary London setting in the 1960s. 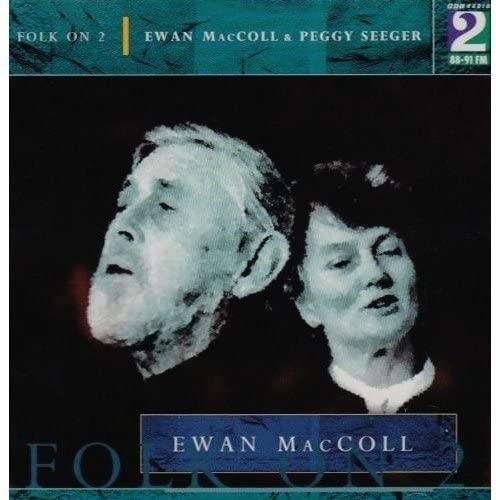 See also: my friend and long-ago colleague Dave Bowman's excellent piece for the Scottish newspaper The National on MacColl, supporter of Scottish independence (he was born in Salford, plain James Miller, though to Scottish parents)

The song MacColl wrote was much shorter than the one we have come to regard as standard.

How the extended version developed is something of a mystery, at least to me. The website songfacts.com informs us that the much longer Sweet Thames Flow Softly was published by "a local Londoner" drawing on tabloid speculation that the song referred to an extra-marital fling on MacColl's part.

But how far should we trust songfacts.com when it also offers And she from Queue to Islewood/Her love for me was swearin' as a couplet?

There is room, as you might expect, for Kew and Isleworth in the MacColl lyrics but not, curiously enough, Queue or Islewood.

MacColl died in 1989, aged 74, after heart surgery led to complications. I turned for clarification to his widow, Peggy Seeger. The person who monitors her own site, I M Fielding, provided the original verses* but could give no further explanation. "Peggy is swamped," she explained, adding later that the evolution of lyrics was common: "We don’t bother chasing them down any more. it’s the folk process."

Perhaps an erudite reader can enlighten me. Someone, somewhere must have explained the added verses.

On the centenary of MacColl's birth six years ago, Neil Spencer wrote in the Guardian  that he was "best known for a couple of classic songs".

As for the other 300 or more, he went on, these were mainly of interest to "the folk faithful". Very belatedly reading those words, I imagined MacColl, not always an easy man, spinning angrily in his grave.

Was his formidable output to be reduced, even in the least clichéd of Britain's pretty poor bunch of  daily newspapers, to Dirty Old Town and The First Time Ever I Saw Your Face?  One that every other Irishman mistakenly believes is from his own fair isle, the other a hit because someone else recognised it could be.

It hardly helps that not only was Spencer essentially right but the rigid Stalinist MacColl was, at heart, deeply suspicious of music that attained popularity. But then we, the folk faithful, know perfectly well that ours is a minority genre and many of us rather like it that way while paradoxically feeling an entitlement to feign indignation at its lack of broader acclaim.

In fact, MacColl’s output had a significance that transcends all notions of conventional taste. He had tender moments - the song made so famous by Roberta Flack being an obvious example - but his best songs were simple but expertly crafted snapshots of the daily lives and travails, interests and challenges of ordinary people: fishermen, miners, apprentices, travellers, ramblers.

Back to the song, Even admirers of the Thames sometimes agree that the river has its highs and lows without even referring to water levels.  There is imposing grandeur at Westminster, industrial nostalgia at Battersea and leafy charm as the river winds westward from Putney.

There are also some nondescript or downright ugly riverside views. Yet even MacColl's shorter original bestows a little beauty on these.

Sweet Thames, Flow Softly - the title taken from the 16th century English poet Edmund Spenser's Prothalamion - tells of love gained, love lost as it tracks a geographically erratic path ("artistic licence" according to MacColl) across the capital. It's as fine a London love song as I know.

But what of the numerous versions of Sweet Thames? In truth, there are too many to make a simple competitive appraisal seem sensible: the Clancy Brothers, the Dubliners, Dave Burland, Maddy Prior, Christy Moore and Sinead O'Connor ("there's lots and lot of love songs, lots great one, lots of terrible ones but that one stands for me head and shoulders above the rest," said Christy referring not to Sweet Thames but to The First Time) and Planxty have all had shots at it.

But so have Rufus and Martha Wainwright, James Keelaghan, the Johnstons,  Schooner Fare, Paddy Reilly, Alison Brown, Weddings Parties Anything, Mary Courtney, SullivanBarton , Cherish The Ladies, Johnny McEvoy, Jon Boden and Sam Sweeneey, Mick Groves; Jean Redpath and The Yetties. And doubtless many more. The first recorded version, I believe, was by John Faulkner and MacColl and Seeger's own Critics' Group in 1966.

I will not pick a supposed winner but present three versions I like almost equally.

First we have Christy and Sinead, the former a man who seems, as Bill Taylor has observed, to cover every song ever composed or handed down.

I also warmed instantly to the Wainwright siblings Martha and Rufus, offspring of the much-missed Canadian singer-songwriter Kate McGarrigle.

For the openly gay Rufus to sing so lovingly about London is remarkable in itself given his grim memories of being raped and mugged there when only 14 by an older man he'd met in a bar and accompanied to Hyde Park.

And then, naturally, there is the writer. I greatly enjoy the song as recorded by MacColl and Seeger.

The album on which it appeared was released in 1983, 17 years ago after MacColl wrote the song.

If MacColl was not the "local Londoner" who added a few verses, he does not seem to have minded too much.Wapping is there in all its glory. 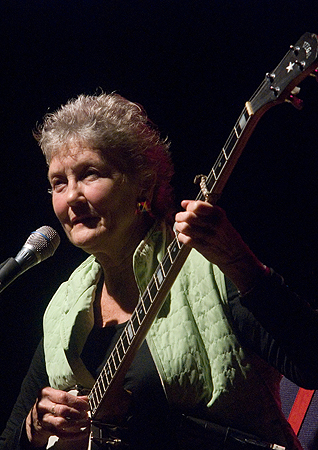 I met my girl at Woolwich Pier,

Beneath a big crane standing,

And 0, the love I felt for her

It passed all understanding.

Took her sailing on the river,

London town was mine to give her,

Made the Thames into a crown,

Made a brooch of Silvertown,

At London Yard, I held her hand,

At Blackwall Point I faced her;

At the Isle of Dogs I kissed her mouth

And tenderly embraced her.

Heard the bells of Greenwich ringing,

All the time my heart was singing,

Limehouse Reach I gave her there,

As a ribbon for her hair,

We cheek-to-cheek were dancing;

Her necklace made of London Bridge

Her beauty was enhancing.

Kissed her once again at Wapping,

After that there was no stopping,

Richmond Park, it was her ring,

I’d have given her anything,

From Rotherhithe to Putney Bridge,

My love I was declaring;

And she, from Kew to Isleworth,

Her love for me was swearing.

Love had set my heart a-burning,

Never saw the tide was turning,

Gave her Hampton Court to twist,

Into a bracelet for her wrist,

But now, alas, the tide has changed,

My love she has gone from me;

And winter’s frost has touched my heart

And put a blight upon me.

Creeping fog is on the river,

Sun and moon and stars gone with her,

Swift the Thames runs to the sea,

Bearing ships and part of me.

I'm not sure how highly I'd rate this as a song, at least not as presented here. It's good enough, I suppose, but it meanders along rather monotonously. Still, of these three versions, the Wainwrights definitely edge out Moore and O'Connor. Melancholy is sort of their stock in trade and that tone serves them well.
Moore's and O'Conner's voices blend well together, but I prefer them doing other MacColl material, such as Go, Move, Shift.
As for MacColl and Seeger, he undoubtedly wrote some great songs but I don't think I've heard a single one that I didn't think someone else could sing better. I've never been a great fan of Peggy Seeger, either. And what's with the tinkling, twinkling background accompaniment? Doesn't work.
To get back to my original point, I'd like to hear Sweet Thames, Flow Softly given a more full-blooded treatment, turned into something really celebratory. The Mighty Doonans spring to mind, or even the Pogues. Good becomes great.

With so many more people coming to the site, you'd think a few others would express a view rather than leaving the whole thing as a conversation between Bill and me!

I'm very fond of this song! I'm planning on playing it for my Valentine's Day radio show. To Bill, for a "celebratory" version, I'm very fond of the recording by the Boston group Siucra, from their 2003 album A Place I Know. It's faster than most, with a bodhran to give it energy.

Intrigued by the radio reference, Juliet. Tell us more ....

I'm one of the rotating hosts of a show called "Celtic Music Go Bragh Go Bragh" on WEFT-FM in Champaign, Illinois. Our playlists are archived here, along with audio files of the last couple of shows:

I'm planning to play the Siúcra version this Sunday.

Thanks for that. Expect a plug one day soon!