Home Archives Profile Subscribe
Song of the Day Revisited: Sharon Shannon/ Dessie O'Halloran ... Say You Love Me
Bill Taylor on being with the band (and The Band's Garth Hudson)

Just over three years ago, I published a whimsical edition of the Cover Story series about The Croppy Boy, a melancholy song of rebellion, capture and execution from the Irish rising of 1798. One version I briefly discussed was by the Dubliners, the other Anne Byrne.

Ronnie Drew, who took the lead vocals for the Dubliners' interpretation, died in 2008, aged 74. Anne, who grew up a few streets from Ronnie's home in Dun Laoghaire and knew him well, was 78 when she passed away between Christmas and New Year.

The Cover Story article was whimsical because it was inspired by the appearance of an Irish-owned cafe to take the place of a recently closed Nepalese restaurant around the corner from my home in west London.

The nameplate I watched being installed announced the cafe as The Croppy Boy, though this proved a short-lived choice and it is as The Horseshoe that it now trades in takeaway-only lockdown form.

My 2017 article drew a belated response from Anne's son Jason after her death. He was correcting my mistaken memory that his mother was a native of Belfast.

And of course, he broke the sad news. I posted a mention on the Mudcat folk music message board since I had seen no report in any media outlet of Anne's death. I invited Jason to contribute a few words about a woman we agree was "immensely talented" and this is the result: 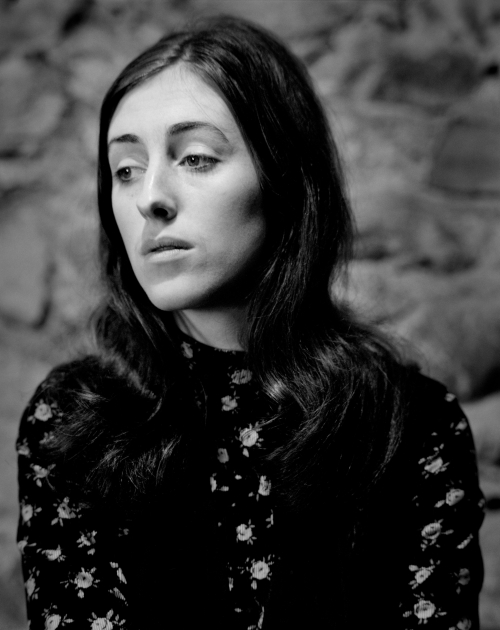 The portrait of Anne, supplied the the family, was taken by the German photographer Evelyn Hofer in 1967

Anne Byrne was born in Dun Laoghaire, County Dublin in 1943.
She was gifted with a beautiful singing voice which became apparent at an early age, earning her many awards and recognition even in her teens.
Much of her early experience of taking to the stage was in the form of pantomime and musicals which was part of a family tradition going back generations.
Soon her talents were noticed and she found herself recording and touring with a singer called Jesse Owens, playing popular ballads and folk songs.
They recorded two albums together and she began to make a name for herself both in Ireland and internationally. She toured much of Europe at this time.
Her beautiful voice came to the attention of a number of producers and with the folk boom just starting she began to record as a solo artist, releasing three albums across a period of seven years.
Anne recorded many of the best Irish and English folk songs, performing outstanding renditions of The Foggy Dew, Willie O'Winsbury and The Wind That Shakes the Barley. Willie O'Winsbury, from a 1974 album, Come By the Hills, is the song I have chosen [below] to illustrate my mother's artistry.
She also covered songs by Bob Dylan, Gordon Lighfoot and Eric Anderson. Her music became popular in the United States and she lived and toured there during this period, even getting to play the famous Newport Folk Festival. She also started a family, marrying Patrick Roche, a musician and artist, and had three children, Patrick, Jason and Oisin.
Anne was in high demand at this time and when she returned from America she was a regular in the hot spots of the Irish folk scene, The Embankment in Tallaght, the Coffee Kitchen and of course O'Donoghue's pub in Dublin. It was here that she performed with the Dubliners, the Chieftains and many other famous Irish musicians.
Alas, the pressure of touring and recording while bringing up a young family was too much to bear and Anne retired from singing professionally in 1980, devoting the rest of her life to her family and friends.
She retained a keen interest in music with a particular love of the music of Kate Bush and Bruce Springsteen. She continued to sing in private settings, for family and friends, for many years after.
Sadly she passed away on the 28th December 2020 and is survived by her husband. Jason and Oisin. Patrick died in infancy.

* From Lin at the Mudcat thread:

'I am so very sad to hear of Anne Byrne's passing. I have been a huge fan of her music for many years. I was lucky to have found most of her albums over the years. I live in California and found a few of her albums in used record shops here but found most in record shops in London when I was visiting there in the 1980s. I just had to try and find all her albums including the ones where she sang on some of the Abbey Tavern albums.I'm not sure if I have everything she ever recorded but probably have the majority of albums (all vinyl). My sincere condolences to her husband, sons and all her family members and friends.  What an incredibly talented lady!'

* Beachcomber:  'How sad. I always thought that Anne Byrne had a beautiful voice , she rivalled Joan Baez for me.'

i am shocked and saddened to hear of the death of Anne, my friend.

Great shock to hear of Anne's death. She should be widely REMEMBERED - her singing surpasses many of the time. a talent few are gifted with. May she rest in peace - condolences to family.

Just heard of the death of Anne Byrne, i was a big fan of hers. She was beautifull and very down to earth, always had time for a chat after a show. My sincerely sympathy to Paddy and the family.

Didn't know she had passed away. She did surpass Joan Baez who was also 🏆wonderful and could stay ❤ listening 🎶 forever. 👍Great times furthermore now trying to live with Covid.

I have only discovered her and a numerous number of songs she sang. I loved her voice; it was incredible. I am so sorry to here of her passing.

Very sad to read of Anne's passing, I remember her very well I was in her class at Domican Dun Laoire (where I was a boarder) and can remember her singing at school and Sr. Angelo being so taken with her voice!! My thoughts go out to you and her family, May she rest in peace..she had the voice of an angel and I still listen to her often.

Saddened to hear of the passing of Anne, I offer my sympathies to her family, I was a fan of her most beautiful voice, now in my seventies I remember her right back to the sixties with Jesse, may she rest in peace,

To-day I heard of the death of Ann, my condolences to her family. Ann and I were class mates in Dun Laoghaire and sang together in the school choir. We did meet on rare occasions in Dun Laoghaire. Her son Patrick was a month older than my daughter. My thoughts and prayers are with her Mam, sisters Angela and Maureen, her husband and sons.