Home Archives Profile Subscribe
Potted Jez Lowe: on Dylan and Durham Cathedral, Europe and getting older
Cover Story: (48) Carrickfergus by Van the Man, the Dubliners or the sublime Allison Moorer? 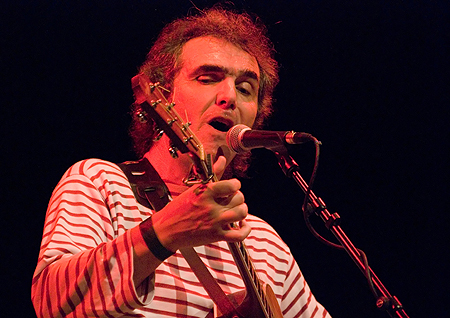 Photo: Jez Lowe at Fylde Festival, 2010. With thanks for permissions already granted to folkimages.com

Not to put too fine a point on it, I wanted to be Jimmy Montgomery.

Who? Only someone without a genuine love of football, or too young to bother with historic events in the game, would ask the question.

The rest, whichever teams they support, will have heard of and seen if only on screen the extraordinary double save Monty pulled off at Wembley on May 5 1973. In that magical moment, he preserved a 1-0 lead to produce a fairytale result when FA Cup finals really mattered, Second Division Sunderland beating Leeds United, then a mighty force in English football.

As a lad whose best position was also in goal,  I'd watch him at Roker Park long before that famous final and be awe-struck. He was not just a great keeper; I envied his looks and his hair, too, and imagined him a great success with girls.

Jez Lowe, a singer-songwriter revered throughout the folk world, regarded Monty as a boyhood hero, too. As a teenager from Easington, a former mining town 10 miles outside Sunderland, Jez was caught up in the emotional scenes on Wearside as the triumphant underdogs came home and showed off their cup in a victory parade that brought 500,000 people on to the streets.

And now, Jez's new album Crazy Pagan, kicks off with Shaking Monty  a song inspired by meeting the former player, now 77 (the encounter  is described at the Big Interview) at a civic ceremony in Sunderland. It's a strong opener with a compelling rhythm and lyrics that strike a fine balance between fan worship  and human equality:  "Why am I weak-kneed walking with a damn fool's grin/Up to a man no bigger than the rest?"

Shaking Monty is just the starting point for a set of beautifully crafted and richly varied tracks that reinforce the impression of Jez Lowe as an observer of life bursting with wit, warmth and descriptive power. There is so much that is good on this album that it is difficult to be sure where to go next after the tribute to Monty.

Jez himself does a good job of introducing a couple of the songs in that interview.

Loon in the Moon, the title borrowed from Chae Strathie's space fantasy book for children,  recalls the day one of the world's biggest rock bands, The Who, staged a secretive album cover photo shoot "at the bottom of our street". The title also alludes to the group's eccentric drummer Keith Moon, "higher than high, with your wide eyes seeing for miles" and destined to die before he got old.

There's clinging melancholy in the Lowe repertoire, but also hints of vaudeville, once an important feature of northern nightlife that spread from the music halls to working men’s clubs. So Coal Mountain, a sad but defiant farewell to pit life, is followed by Talk to Me Dirty in Geordie in which the lad from the North East meets a London lass in Pret a Manger and is promised "more than a snog on the Tyne" in return for a few pets and hinnies in his small talk. Disappointingly, Jez insists it never happened.

If Monty was one hero of my youth, Lou Killen was another. Memory can deceive but I recall a powerful Geordie voice, lusty choruses and a bloke's bloke, as I described him when interviewing Jez. But he also had what the novelist Angela Carter, quoted in a Guardian obituary, called a "subtle and sensitive" style. In any event, Lou became Louisa Jo in the closing years of his/her life. She, as it is right to remember her now, sang for the last time in 2010, on Jez's album Wotcheor!, and is commemorated in the poignant Louisa's Choosing, respectfully recording his transition from "ballad singer, shanty man, husband, lover, fancy man" to chanteuse, "standing proud, as fearless as a flying cloud".  Those words are from the lyrics; his answer to me was noble, too: "Everyone just accepted it."

Explore Crazy Pagan. Like much of Jez Lowe's work, it does not immediately fit the criteria for "easy listening" but demands a little perseverance,  growing gradually easier and easier. The effort is worthwhile and fully rewarded. 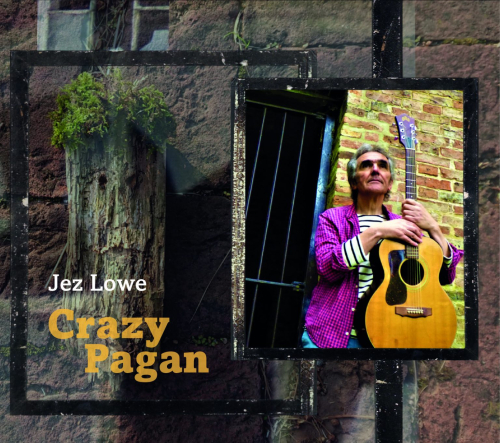 ** Potted Jez Lowe: on Dylan and Durham Cathedral, Europe and getting older

Thanks for drawing my attention to this. I had the chance to present Jez Lowe (w James Keelaghan). Lovely man! His new album made my Top 10 of year.

(via Twitter`; Brenda Tacik hosts a radio show that draws deeply from the rich wellspring of folk and roots music. Saturday 10-11 am, Regina Community Radio, https://cjtr.ca/radio/deeper-well/)