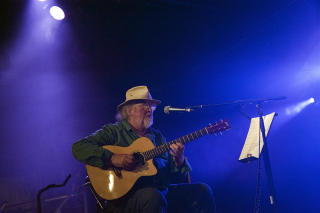 In the same year, I came across Walk Don't Run by a US band, the Ventures. Then came the Tornados' splendid Telstar; I still remember our geography teacher George Dixon telling us how much he loved the dramatic moment introducing a seemingly higher pitch that he likened to changing gear.

It was rather later in the decade that I turned to folk music. The High Level Ranters, a sort of North-eastern folk supergroup, produced a wonderful collective sound and I listened a lot to the Irish groups such as the Dubliners who included jigs, reels and slow airs in their sets, a phenomenon taken to new levels in the 1970s by Planxty, Moving Hearts and the Bothy Band among others. The Chieftains, meanwhile, concentrated solely on non-vocal music, collaborations with singers coming later.

On the British folk scene, a new wave of musicians mixing traditional and contemporary folk, blues, jazz and classical influences was exemplified by John Renbourn and Bert Jansch, together, solo or in Pentangle.

Which brings me back to to where I started.

At Twitter, Hilary Fawcett, whose online company I keep because we are somewhat like-minded (being European, music and Sunderland AFC among our shared passions), recalled the extraordinary virtuosity of Renbourn, who died five years ago. I mentioned one exquisite piece I could not name and from my description, Hilary correctly identified The Earl of of Salisbury, hailed bv Samy Zafrany when posting it at YouTube as "an enchanting piece of rarely found rennaisance-like music".

It comes from Renbourn's gloriously titled 1967 album Sir John Alot of Merrie Englandes Musyk Thyng and ye Grene Knyghte  and now becomes the first entry in a little series I may or may not get round to updating from time to time. Enjoy ....

Thanks for that great list, ayant. Didn’t Chet Atkins review the original of Walk Don’t Run ?

I think that John and his work were the things which gave me the courage to keep on composing.
Although I now concentrate on songs, you might like one of my acoustic pieces, "Beyond Words" which can be found here: https://youtu.be/aGMTLUuUk70
You'll find many more of my songs here : http://www.stephen-william-rowe.com
Stephen William ROWE

Yes " Walk Don't Run " was a Jazz track by Johnny Smith . A few years later Atkins recorded it . A few years after that The Ventures had the biggest hit with the tune .