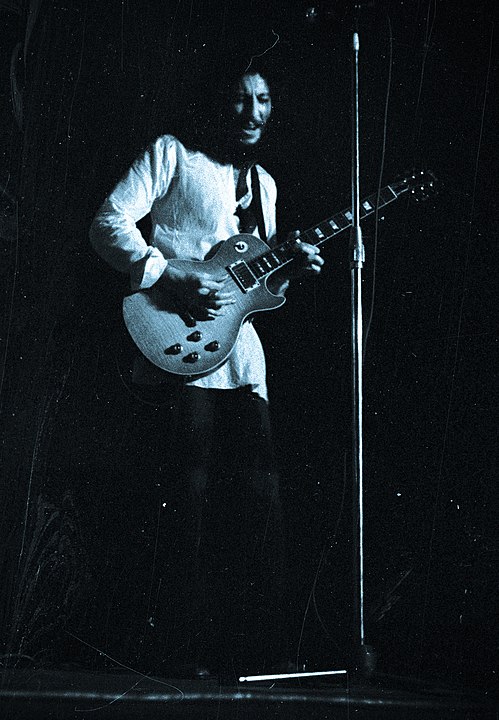 Did I reach folk music via the blues or the other way round? I think it was the former; you'd go to folk clubs to hear people playing Dylan and the blues and then find yourself introduced to the traditional music of the British Isles and beyond. I was quickly hooked without losing affection for what had taken me into those smoke-filled, North-eastern pub function rooms in the first place.

Peter Green, the founder of Fleetwood Mac who has just died aged 73, was one of the musicians who inspired me back then.

I cannot overstate how important those British bluesmen were in the development of musical tastes that have remained with me for more than half a century.

Like Green, I grew up on conventional pop and rock - his own early inspiration was the Shadows' Hank Marvin - but came to find it unsatisfying.

Green followed Eric Clapton as lead guitarist for the wonderful John Mayall and the Bluesbreakers and was responsible for some magical moments during his brief spell in that band.

As the band walked in the studio I noticed an amplifier which I never saw before, so I said to John Mayall: 'Where's Eric Clapton?' Mayall answered: 'He's not with us anymore, he left us a few weeks ago.' I was in a shock of state [sic] but Mayall said: 'Don't worry, we got someone better.' I said: 'Wait a minute, hang on a second, this is ridiculous. You've got someone better? Than Eric Clapton?' John said: 'He might not be better now, but you wait, in a couple of years he's going to be the best.' Then he introduced me to Peter Green.

In Fleetwood Mac, the band as it was before crossing the Atlantic and becoming vastly more successful but - for me - annoyingly inferior, he also excelled.

I liked this quote from the drummer, Mick Fleetwood: «We were a rude, wild, fun-loving bunch of people ... Fleetwood Mac never wanted to be pure blues like John Mayall, or rock like Hendrix or Cream. We were a funny, vulgar, drunken, vaudeville blues band at that time [1967–70], playing music as much to amuse ourselves as to please an audience."

There was still plenty of blues in the original Mac but Green added new ideas and some groundbreaking sounds: Black Magic Woman, Albatross, Oh Well, Man of the World and The Green Manalishi prominent among them.

His talent was immense and however good the songs, it was the guitar playing that stood out.

BB King famously said he was the only British blues guitarist able to give him the "cold sweats".

Green had a deeply philosophical nature and gave away a lot of money to charity, feeling a sense of guilt at all he was earning from music.

He once abandoned music to work as a gravedigger. And he had mighty psychiatric demons, greatly aggravated by prodigious use of LSD. He was diagnosed with schizophrenia and underwent electroconvulsive treatment.

“Peter was the man who started the band Fleetwood Mac along with myself, John McVie, and Jeremy Spencer.

"No one has ever stepped into the ranks of Fleetwood Mac without a reverence for Peter Green and his talent, and to the fact that music should shine bright and always be delivered with uncompromising passion.”

Peter Green, composer of the most incredibly beautiful haunting songs has passed on from this world.
He couldn’t handle the intensity of the music industry & left the band before they rocketed to global super stardom.
What a beautiful legacy of songs he’s left behind..
RIP sir. pic.twitter.com/XEzfWB3lDo

For much more on Peter Green's life and work, see

* The Guardian obituary at this link

* an appreciation at the Jazz Journal site here

Nice tribute to an exceptional musician.

It's not mentioned enough but he was an exceptional and very soulful singer.

Agree, Jake. Annie Lennox clearly does, too, looking at her tweet