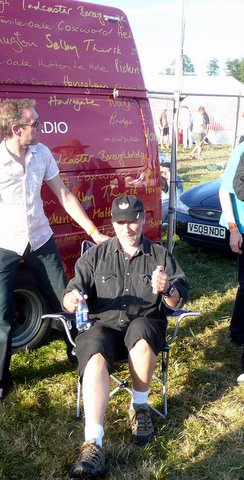 When I bumped into Richard Thompson relaxing at Cropredy before the Liege and Lief line-up, minus Sandy, took stage

Move on to bands, the man said, so we shall. If a top 10 of male or female singers, from a lifetime of listening to music, is hard enough, limiting a line-up of bands to 10 is frankly impossible.

I love folk music and folk-rock but what about all the blues, rock, pop and even country groups I've thoroughly enjoyed, not to mention classical ensembles?

For the purposes of this little list, then, I shall exclude classical music altogether and restrict my choice to bands I have seen live. And even then its tough.

This is my selection. I have listed them in order of how much pleasure each has given me, not because I necessarily believe them to be the best band in bather world, second best and so on

* 1 Fairport Convention - never saw them with Sandy Denny but the recreation of the Liege and Lief album at the 2007 Cropredy festival, with Chris While taking Sandy's place to near-perfection, was sensational

* 2 Steeleye Span - seen repeatedly, including the London gig where they showered the audience with money floating down from the ceiling. Maddy Prior and co transformed English folk

* 5 Cranberries - my guilty pleasure. A memorable night on the Cote d'Azur.

* 6 Dire Straits - gave me a glorious Parisian soiree, lighting up the City of Light

* 7 Coldplay - my unfashionable choice. Superb in Nice and Lyon

* 8 Lindisfarne - the best Christmas show I've attended (Newcastle upon Tyne) and I did see them in an amazing support set for Ralph McTell in Sunderland (he had to be good just to follow them, and was)

*.9 Chieftains - reliably inspirational, especially on the night they shared the Royal Albert Halt stage with Van Morrison, with John Peel as compere

* 10 John Mayall and the Bluesbreakers - sneaking a place on the basis of a gig on the Med coast, with Buddy Whittington on lead guitar. How I wish I'd seen them back when Clapton filled that role.

Sadly, the limit of 10 leaves no room for the Stones, Geno Washington's Ram Jam Band, Altan, Dervish, Pentangle, the Doonans, the Dubliners, Sharon Shannon, Alan Stivell and Ron Kavana bands or any of the marvellous people I've caught at the London blues bar, Ain't Nothing But ....

And that's just the bands I have seen live. Excluding those I haven't means no Byrds, Cream (I did see Blind Faith and they disappointed), Beach Boys, Beatles, Queen, Paul Butterfield, Led Zeppelin, Jefferson Airplane, Planxty, Bothy Band .. that list would be hard to exhaust.

Now over to the small but perfectly formed Salut! Live jury ...

The Beach Boys - for all kinds of reasons. I'll take them over the Beatles any day. "Don't Worry Baby" is my all-time favourite song.
The Who - the Rolling Stones have long been introduced as "the greatest rock 'n' roll band in the world." But The Who are the greatest out-and-out ROCK band. Mesmerizing to see live.
(Bruce Springsteen and) The E Street Band - brilliant musicians with a wide-ranging repertoire. And amazingly exciting, leavened with humour, marathon concerts.
Gunhill Road - from the Bronx, not widely known but wildly underrated. Great songs, great harmonies. Lesley introduced me to them. I was delighted recently to see how much of their stuff is on Spotify.
The Traveling Wilburys - one of the greatest collections of talent ever. And again, leavened with humour. I never tire of listening to them.
The Pogues - As a musician friend of mine said once of Shane MacGowan, "He can't sing. But he does it beautifully." And the band plays beautifully, though sometimes you have to listen closely.
Electric Light Orchestra - Jeff Lynne's talent approaches genius. I was able to see ELO in Toronto on a rare tour. Sublime orchestration and musicianship.
The Peddlers - a jazz trio (bassist Tab Martin was from Newcastle) I fell in love with when they played Baxter's nightclub in Bishop Auckland. It's been a long-lasting affair.
The Byrds - through a number of incarnations, they've always been compelling to listen to. I have cherished memories of Roger McGuinn doing a solo acoustic show in Philadelphia and telling someone who yelled out a request, "I can't do 'Eight Miles High' without the rest of the guys." And then trying anyway and pulling it off.
The Kinks - the thinking man's band. Great on record, great live with a bit of a roller-coaster career. During one of the dips, they played a 3-night run at the Top Hat club in Spennymoor. I was front and centre for every show. "Waterloo Sunset" is one of the best songs ever written.
Counting Crows - I remember buying their first album, "August and Everything After" in 1993 and, unusually, liking every single song. There haven't been many since that I haven't liked.

Interesting list. I did see Led Zep twice and they were awesome. One of my favourite groups is Free and I missed out on seeing them live at Maidstone Art College in about 1970 as I was sick or something. I caught up with the world's best blues-rock singer Paul Rodgers in the 21st Century when he fronted Queen at Le Zénith in Paris. I also met Paul on a Eurostar platform when we chatted while waiting for the train and he was really friendly but that's another story....

Jules: apart from the obvious one, I know little of the music of Free

For sheer feelgood, gotta-dance mayhem, Blowzabella and Bellowhead live were pretty hard to beat. Many happy memories of dusty, sweaty nights of fun!

Springsteen , seen many times and always great. First time Townsend joined in. Best was in Cardiff with Eric Burdon singing We Gotta Get Outta This Place.
Stackridge; crazy and fun.
Steve Harley and Cockney Rebel, plus solo. Always great and still going.
Show of Hands
Bellowhead; went to a gig on their farewell tour. Amazing and shocked I never saw them earlier
Ones I've missed; Neil Young, Beach Boys, ( although I did see Glenn Campbell) , Creedence

Bellowhead was another glaring omission from my mentions. Never saw them live but love their albums and spent two or three highly enjoyable hours watching clips of them on YouTube

From my Liverpool days, in order:

From my student days, in order:

My overall list :
1. Cream
2. The Jimi Hendix Experience
3. Talking Heads
4. The Clash
5. Buddy Holly and The Crickets
6. The Beatles
7. The Rolling Stones
8. The Kinks
9. The Band
10.Bob Marley and the Wailers

If I include only those |I saw live , I would say :

I may be pushing the group idea with Elvis C. and Buddy Holly but it seemed more of a group with the Attractions and Buddy and the Crickets seemed to form a self contained unit . . This leaves out many considered as solo acts : Elvis Presley , James Brown , Marvin Gaye , Dylan , Donovan , Patti Smith , Mitch Ryder , Klaus Nomi , Bowie , Doc Watson , Janis and on and on

Colin ... I also saw Blind Faith . I saw them on their only U.S. tour . The bill was : "Taste" ...Rory Gallagher's first band . followed by "Delaney, Bonnie and Friends "....featuring Eric Clapton on guitar , Leon Russell on piano ,Bobby Whitlock on organ , Bobby Keys on Sax , Jim Keltner on Drums and Rita Coolidge on backing vocals . Then "Blind Faith" , again Eric... with Ginger , Steve Winwood and Rick Grech . I don't agree with you on Blind Faith ...I loved them and the whole show .
.

Blind Faith, Stan .... with the line-up they had. What could possibly go wrong? I was maybe just unlucky. It was their debut, live in Hyde Park, and having loved Cream, I maybe expected too much. I sent my recall not being alone in my disappointment but I also remember that I would have hitchhiked 250 miles through the night and would have been very tired. Julian Young: further Led Zep thought - I regret never seeing them live and discovered only much later after their heyday that Sandy Denny sang with them on Battle of Evermore.

to my huge regret , Alan, I never saw either live and that was the restriction I imposed on myself in drawing up the list
And I say as much at the end of the article. . Based on records they made and clips I’ve seen , both would have been serious contenders

Only one I've seen live on your list is Coldplay at Parc des Princes. Stones in Paris & Marseille too...Best here was Sting at Bataclan a year on. Roger Waters up there too - talent to back up activism. Most recent was Stormzy - expected grime menace but a prawn sandwich gig.

I'm afraid I'm a traditional rock 'n' roll band fancier, but most of those were in the United States so I never got to see them in person.

No 1 is The Beatles, which I saw(but hardly heard due to the screaming teenyboppers) at the De Montfort Hall in Leicester in 1963.
No 2 is the Rolling Stones, which I was lucky enough to hear when they held their Hyde Park concert in 1971.
No 3 I think was Manfred Mann, Leicester, 1964.
No. 4 was The Band, at the Albert Hall in 1970.
Of the bands I never got to see in person, I think Bob Dylan topped out, followed by a melange of Grateful Dead, Jefferson Airplane, The Incredible String Band, Traffic, and finally Jethro Tull. There were also a lot of singers that I loved listening to, like Joan Baez, Elvis Presley, and of course Johnny Cash. I haven't been all that struck on any groups since the 1970s, except maybe Queen.