Covid-19. Songs of endurance (2) Graham and Eileen Pratt: Ned of the Hill 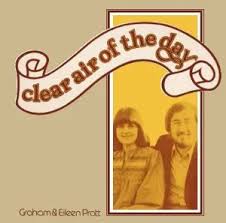 In a recent post at Salut! Live, I invited readers to nominate the one piece of music they could listen to over and again during lockdown.

This is a near cousin of that little exercise and can be added to at will. I will present in each posting a single track, a song or tune that holds such strong appeal for me that it will never leave my mind as long as I have control of it. I shall merge it with the one-off isolation category and call it Songs of Endurance in the sense of helping us withstand hardship or stress, not a bad thing to have in this troubled time.

Ned of the Hill is a great old Irish song. I have heard it sung well by Kate Rusby and Kathryn Roberts and Ron Kavana and with gusto by the Pogues but never better than by Graham and Eileen Pratt (by which I mean Eileen since Graham's musical contribution, though important, is non-vocal).

The Eileen Pratt known to me has an utterly breathtaking voice. I first encountered it at the Herga folk club in Wealdstone, north-west London, shortly after moving south in the early 1970s. She and her husband were part of the quartet Regal Slip. The band was exceptional but I much preferred the Pratts as a duo and remmber one folk club performance, at Chipping Sodbury, as if it were yesterday as opposed to decades ago.

Wikipedia tells us the song is "usually" sung in Irish. This came as a surprise to me given how often I've heard it sung in English. But a snatch of a version in that "usual" form can be found at the intriguing podcasts.ie (Voices of Ireland) site.

Here, the author Steve Dunford relates the story of the subject of the song, a County Tipperary aristocrat named Éamonn Ó Riain.

Ó Riain, Ryan to those not Irish, became a rapparee gang leader during the confiscation - just a long word for theft - under the Cromwellian 1652 Act of Settlement of land owned by Irish Catholics. The Wikipedia account has it that Ryan turned to banditry after shooting dead a tax collector when disputing the confiscation of a poor woman's cow.

Listen to the song and it sounds like a classic tale of the young woman besotted with a strong and charming but deeply unwealthy young man and determined to run off with him. Eileen Pratt sings it regally without the least slip. Whether love story or rebel song, I will love it as long as I live.

* The Pratts' own site is at this link. It informs us that they have been involved with folk music all their adult lives but are no longer active as performers. At the time the site was last updated, Graham was running two choirs, Sheffield Folk Chorale (SFC) and Millhouses Community Choir (MCC).