Cover Story (43). The Auld Triangle: Glen Hansard, the Dubliners or the Pogues 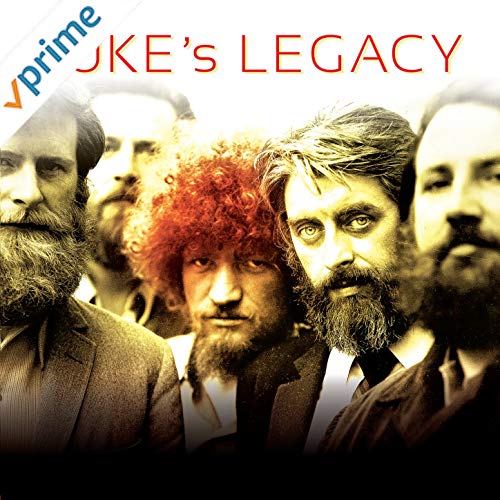 . You can buy this at Salut! Live's Amazon link. Click anywhere on this caption

The Auld Triangle is a mournful Irish ballad, one of so many that call to mind the G K Chesterton lines:

'The great Gaels of Ireland are the men that God made mad,

For all their wars are merry, and all their songs are sad'

I cannot pretend always to have loved the song and would not choose to listen to it in the car.

Seeing it performed live is a quite different matter. A good singer can demonstrate the song's gnawing emotion and a lusty rendition of the chorus can send shivers down the spine.

I have chosen three live versions for this comparison, the latest - and somewhat overdue - addition to Salut! Live's Cover Story series.

First the song: it was not written - according to some accounts - by the Irish writer, poet, IRA plotter and general hell-raiser Brendan Behan, as the Dubliners' late singer Luke Kelly has it in the first of the clips I have chosen, but by his brother, Dominic, for BB's 1954 play The Quare Fellow. I thought Dominic was the author but simply cannot be sure.

The lyrics depict life and imagery in Dublin's Mountjoy prison, where Brendan Behan spent four years for IRA activities (to add to an earlier Borstal sentence in England).

His 14-year term, for his part in a failed attempt to murder two detectives, was cut short by an amnesty.

The Auld Triangle was a large metal object beaten daily as a wake-up call and to announce other features of prison routine - including, as here, an execution.

One verse mentions the female prison and its 75 inmates "among whom I wish I could dwell", the triangle thus assuming sexual connotations.

Kelly, as always, sings like a dream and it is always difficult to find stronger versions of most of the songs he performs. But ... ... in his Royal Albert Hall performance as part of a concert commemorating, in 2014, the first official visit of an Irish president (Michael D Higgins) to the UK, Glen Hansard gets very close.

When not producing verbatim records of British parliamentary debates (sorry, couldn't resist), Hansard is an all-round entertainer and writer with an Oscar to his name as co-composer of Falling Slowly, from the soundtrack of The Commitments.  OOPS: Not The Commitments but Once (my thanks for the correction to Bill Taylor).

His singing is not a patch on Kelly's but is passionate and convincing enough. With a great crowd of artists around him on stage - including  Elvis Costello, Paul Brady, Imelda May and the Dubliners' fiddler John Sheahan - it is a resounding interpretation, capped by the magic Hansard works to draw the audience into belting out a chorus of its own.

Shane MacGowan, with the Pogues on a 1984 edition of John Peel's BBC show, is also a worthy contender.

But while Cover Story is not always meant to be a race or competition, I would choose either of the other options mentioned ahead of this.

There are many, many other versions and I would have included Bob Dylan's if only I had been able to locate it.

Feel free to dot that i for me in Comments and please alert me to any other songs you think this series should consider.

* Finally, as a bonus, here is Brendan Behan singing his brother's song:

For good, rough-hewn honesty, I'd choose your bonus version - Behan singing his brother's song. Otherwise, of those offered here, the Pogues for keeping it down and dirty.
I'm generally a fan of Glen Hansard but not for this. (Incidentally, his "Falling Slowly" isn't from "The Commitments," which was all Motown, but the fabulous 2007 movie "Once," starring Hansard and Markéta Irglová.) With all those people on stage, worthy as they are, the song is buried beneath a mish-mash of styles and, I fear, egos.
I was never much enamoured of The Dubliners and Luke Kelly's rendition leaves me cold - it's too mannered and I really hope that echo on his voice is natural and not induced.
Bob Dylan's version is on The Basement Tapes album but doesn't seem to be anywhere on-line, not even Spotify. I believe it also features The Band - I really must hunt it down.
As you say, there are lots of interpretations of The Auld Triangle, including a glorious punked-up assault on the song by the Dropkick Murphys. Not for those of delicate sensibilities. The version from the fairly dire (apart from the music) Coen Brothers' 2013 folk-scene-in-1961-New-York film "Inside Llewellyn Davis" is commendable, though some of the performers may seem incongruous: Justin Timberlake, Chris Thile, Chris Eldridge, Marcus Mumford, & Gabe Witcher. Still, here it is:
https://www.youtube.com/watch?v=zCVIEh0n1o4

A powerful song – stirring, compelling, and a bit haunting too – it gives me goosebumps if it's sung by the right voice and in the right atmosphere.
I'm afraid the version with Glen Hansard and friends doesn't fall into that category at all. Sorry – and with all due respect to all those big names on stage – but this rendition does absolutely nothing for me. Comes over like a nice happy sing-along at a jolly family gathering.
I wasn't aware of the fact that Bob Dylan has sung this song either. To be honest, I can't imagine he has – or ever had – the voice for it. I found a listening sample on Amazon and that more or less confirmed my suspicions. Would be interesting to hear the whole thing, but the bit I heard definitely didn't bowl me over.
I've heard this song live dozens of times. For a long time it was the final song of the first set at almost every Dubliners' gig. Patsy Watchorn's a cappella rendition will always be one of my favourites, very often you could hear a pin drop in the audience when he performed this. (Unless of course the concert happened to be in Dublin, where everyone feels the need to sing along!) And when the rest of the band harmonised the chorus you could almost hear the jingle-jangle along the Royal Canal banks.
But credit where credit is due, I've experienced other excellent versions. The song is part of the Kilkennys' repertoire, for instance – Davey Cashin & Co. make a very impressive job of this.
Having said all that – in the end I think Luke Kelly's rendition takes some beating. His voice simply had the power and the passion that this song needs. And of course this was a special song for Luke - it was the song that started off his love of folk music, the night he visited his first ever folk club way back in the early 1960s - The Folk Song and Ballad in Newcastle (moved a couple of years later to the Bridge Hotel and changed its name accordingly).

Enid Bühler great response (as was Bill’s). I’d accept there was a sort of ‘rattle your jewellery’ feel to the Albert Hall audience - remember the Beatles at a Royal Command performance? - but I still saw loads of passion.

Anyway - the Royal Albert Hall performance is one of the very few instances when John Sheahan sang solo in public. He did sing The Travelling People once, but it was backstage and it was with me ;-) (sorry, couldn't resist)

I am sorry the Dubliners leave Bill cold. They’ve been part of my life for decades. I don’t like the Paddywackery stuff but love the instrumental genius ( Barney RIP) and the wonderful interpretations of good songs. For me, Luke and Ronnie could never be replaced no matter how competent the chosen successor. But I can listen to them on long drives more than I can many others

For your passing interest, the film version of The Quare Fellow is on YouTube in decently high definition. It's most certainly worth a look
https://www.youtube.com/watch?v=uWjehoS1aRs

(she may have been trying to be kind)

I've sung this myself a capella in front of a pub full of Irish people, and it went down so well i was asked to do it again the next night. I love the song.

I don't usually like those "let's all get on stage together to belt out a big finale" occasions but I must admit Hansard & Co. drew me in, and although I'm only 1/8th Irish it had me pining for the old country. I'll even admit to getting goosebumps a couple of times.
I'd like to draw your attention to another version, that is unfortunately not on YouTube. Ryan Boldt is the head honcho of Canadian folk-rockers The Deep Dark Woods, a band I listen to a lot. Although he's from the wilds of Saskatchewan (maybe Bill Taylor can educate me as to how wild it is) he has a great love of British folk music, and he included The Auld Triangle on his 2014 solo outing "Broadside Ballads". He keeps it simple, really simple, just voice , accoustic guitar and a tapping foot. I love his mournful delivery, and although I can't point you to the song on YouTube here is another song, which is performed in a similar style.
https://www.youtube.com/watch?v=WapSpZMTXAU