Home Archives Profile Subscribe
Cover Story: (42) who shines on Shine On - Pink Floyd or Christy Moore?
Songs that changed your life, even if only a little. (2) The Beach Boys' Don't Worry Baby

Songs that changed your life, even if only a little. (1) Buffy Sainte-Marie 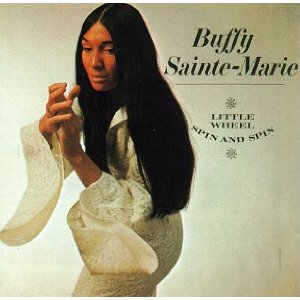 Salut! Live has a habit of launching new series. Some last, some struggle to get started, some die out after a few instalments.

If we had a bigger audience, I'd throw this one out to you all. Is there a song (or tune) that made such an impact on you that it could be said to have changed your life, even if only a little?

There may be more than one, influencing different changes.

Come to think of it, I'll throw it out to you anyway.

I shall kick it off with the first song that sprang to mind as I contemplated the series.

Please do make contact - write to this e-mail address - if you have one you'd like to have your say about.

As you'll see from the second instalment - already written, by my old friend Bill Taylor - it doesn't need to be folk, folk-rock or roots ... we all, or most of us, have broader tastes ...

Now that you're wondering how must they feel Meaning them that you've chased across America's movie screens ...

My generation of British kids knew what was what when it came to westerns. The cowboys were the good guys (except when they were bandits), the "indians" or "Red Indians" were bloodthirsty savages. There was no halfway house.

None of us could guess then, as we watched the cowboys chase or be chased by indians, that the men we saw as heroes would in all likelihood be the ancestors of NRA neanderthals who believe the way to stop school massacres is to arm everyone from teachers to janitor. Or the kind of white trash that chanted "send her back" when Trump  insulted four Democrats with origins deemed un-American.

Until I heard Buffy Sainte-Marie singing My Country Tis of Thy People You're Dying, I had given scarcely a thought to the injustices suffered by North America’s earliest inhabitants.

The anguish and anger that streamed from the lyrics changed all that.

I was always drawn to protest songs.

Like my pal, Bill Taylor, who thought his first contribution to this series might be A Hard Rain's Gonna Fall, I turned to Bob Dylan for the best of the genre.

Then I explored other singers and writers and realised that protest stretched beyond horror at the US war in Vietnam, nuclear weapons and the way black people were treated. There were Irish protest songs, a rich seam of English and Scottish mining (and other workers') protest songs, Woody Guthrie, songs about the Spanish Civil War ... and Buffy Sainte-Marie's magnificent, searing description of the plight of what I thought it was now acceptable to call Native Americans.

Bill grew up, as I did, in County Durham but has lived in Canada for most of his adult life. He points out that in the ever-changing politically correct glossary of his adopted country, Buffy is "native Canadian of, as we say here, First Nations or Indigenous (hard sometimes to keep up with the latest acceptable terminology" ...

Her own words matter a lot more. My Country Tis Of Thy People You're Dying appeared on a 1966 album.

For all I know, she wrote the song some time before then. Whether it poured out in one session of writing, or evolved over time, it's a gem, even if Soldier Blue may have been a bigger it and Up Where We Belong, which she co-wrote, will certainly have made her a good deal more money.

Buffy Saint-Marie is now 78. I salute her for her wonderful, eye-opening work. And let these lyrics sink in:

Now that we're harmless and safe behind laws

Now that my life's to be known as your 'Heritagé

Now that even the graves have been robbed

Now  that our own chosen way is a novelty

Hands on our hearts we saluts you your victory

Choke on your blue white and scarlet hypocrisy

Tags: Buffy Saint-Marie, folk music, My Country 'Tis Of Thy People You're Dying