Home Archives Profile Subscribe
Cover Story: (42) who shines on Shine On - Pink Floyd or Christy Moore?
Songs That Changed Your Life, even if only a little : (3) Elvis Presley and Heartbreak Hotel

Songs that changed your life, even if only a little. (2) The Beach Boys' Don't Worry Baby 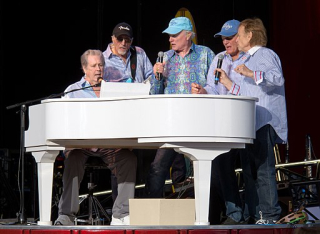 Photo of the band at a reunion by Louise Palanker [CC BY-SA 2.0], via Wikimedia Commons

Colin Randall writes: I did say, when inviting contributions to this new and (from its title) self-explanatory series, that it was not necessary to stick to folk and related forms for music.

Bill Taylor considered Bob Dylan's A Hard Rain's Gonna Fall before settling on something a lot more personal and a lot more to do with pop ...

Write to this e-mail address if you'd like to offer a piece on the song that fits the series title for you. And my thanks to several members of the Facebook I Love Folk Music group for 'liking' my introduction ...
...

I don’t have a lot in common with Keith Moon. But we do (or, rather, did, given that he’s been dead for more than 40 years) share the same favourite song: the Beach Boys’ Don’t Worry Baby.

Moon the Loon even sang a cover version on Two Sides of the Moon, released (or perhaps it escaped) in 1975 and widely regarded as the worst solo album in history – not helped by his refusal to play drums because that was his “job” with The Who.

The original came out in 1964 as the B side of I Get Around, the Beach Boys’ first chart-topping single. I loved I Get Around but I adored Don’t Worry Baby. And have ever since.

It had everything I pictured when I journeyed in my mind, as I often did, from North East England to Southern California – young love, fast cars and an element of derring-do and defiance.

My default position in those days was derring-don’t. I was 16, just out of school and into a dead-end department-store job which I was told was the best I could hope for with two O-levels and the undying disrespect of pretty much all of my teachers.

My head may have been in the clouds but my feet were stuck in the mud up to my knees. Compliant as always, I hunkered down and prepared for the long haul.

Don’t Worry Baby helped turn me into a risk-taker.

I lasted in that 9-to-5 retail grind (actually, it was 9:15 to 5:45) for two years and then fast-talked my way into a three-month trial, with no guarantees, on a newspaper.

Seven years later, with a decent foothold in journalism, I threw it all up and moved, with no work permit, no job and precious little money, to the US.

It took four precarious years to get back into full-time newspaper work. Four years after that, I moved to Canada, again with no work permit (though my wife Lesley had one) and no job. It took another three years to get my career back on track.

That’s sort of the message of the song. The narrator has “pushed the other guys too far” by constantly bragging about his car’s performance. It’s too late now to back down and he has to race them to prove himself. But he keeps thinking “something’s bound to go wrong”.

Enter his girlfriend, who “looks in my eyes and makes me realise when she says, ‘Don’t worry, baby… everything will turn out all right'.

“She told me, ‘Baby, when you race today just take along my love with you. And if you knew how much I loved you baby, nothing could go wrong with you…’ ”

It’s a beautiful song, with classic Beach Boys harmony, phrasing and falsetto. While regarded at first – by some; not by Keith Moon and me – as one of Brian Wilson’s lesser efforts (it was co-written with Roger Christian but produced by Wilson), it’s long since taken its proper place in his illustrious canon.

(For the record, Rolling Stone gives top spot to Bob Dylan’s Like a Rolling Stone and Pitchfork puts the Beach Boys’ God Only Knows at No. 1).

The lyrics are a perfect balance between the guy’s self-doubt and fear and the girl’s calm and calming confidence and reassurance. Everything WILL turn out all right.

I was on staff at the Toronto Star, then Canada’s largest daily paper, for 23 years. In 2008, I took a buy-out and early retirement. I wasn’t sentimental about the place and I had no regrets about leaving.

Lesley and a friend, appropriately in Southern California, put together a DVD of photos from my time at the Star, including a few risky moments. For a soundtrack they used, of course, Don’t Worry Baby.

It made me cry. A life-changing song will do that.

If someone had said when I launched Salut! Live that I’d eventually feature The Beach Boys, I’d have laughed. But I am delighted we published this. It’s a great story, Bill

Really enjoyed reading your story, Bill - your "derring-do and defiance" since your N.Echo (once largest paper in N.E England?) days, while listening to the track.