Home Archives Profile Subscribe
Cover Story: Beeswing and other great songs by different artists
Songs that changed your life, even if only a little. (2) The Beach Boys' Don't Worry Baby

Cover Story: (42) who shines on Shine On - Pink Floyd or Christy Moore? 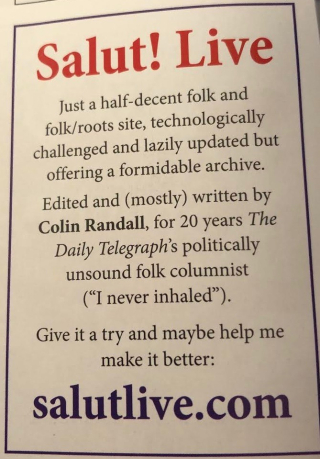 CR writes: when it comes to that well-known folk group, Pink Floyd, I am in two minds.

Young, I loved lots of what they did. But these days, the track I hear on French radio almost to the exclusion of any other is Another Brick in the Wall, which I loathe for reasons I hope the National Union of Teachers would understand. RTL2 does sometimes play Dave Gilmour's Rattle That Lock, based on the four-note signature French rail users hear before platform announcements, and I am grateful that it does.

Christy Moore and I go back a long way. If you were adventurous enough and even wanted to know, you'd find plenty of evidence in this site's archive of our personal and professional relationship and my great appreciation of his music.

If he appears more often than other artists in this series, Cover Story, it is for the simple reason that he has an uncanny knack of choosing just the right song, from whatever source, for his style.

My old pal Bill Taylor explains all below as he compares versions by Floyd and Moore of the same song ...

Christy Moore settled for an understated, hand-hewn headstone. One seems calculated to inspire awe; the other simply to engender the sadness of loss. Apples and oranges… how do you compare two vastly different conceptions of Shine On You Crazy Diamond, David Gilmour, Roger Waters and Rick Wright’s anthem to Syd Barrett?

Even with apples and pears, it can’t be done. But if you get down to the core, then maybe you’re onto something. Barrett was a founder member of Pink Floyd in 1965, lead singer, lead guitarist, lead songwriter. But also lead drug-abuser.

That and his subsequent mental-health problems led to a parting of the ways three years later. Shine On, featured on the band’s 1975 album Wish You Were Here, was an epic in nine segments with superb musicianship, craftsmanship and composition. And some of the loveliest lyrics I know:

Remember when you were young, you shone like the sun.

Shine  on you crazy diamond.

Now there's a look in your eyes, like black holes in the sky.

You were caught on the crossfire of childhood and stardom,

Blown on the steel breeze.

Come on you target for faraway laughter,

Come on you étranger, you legend, you martyr, and shine!

You reached for the secret too soon, you cried for the moon.

Threatened by shadows at night, and exposed in the light.

Well you wore out your welcome with random precision,

Rode on the steel breeze.

Come on you raver, you seer of visions,

Come on you painter, you piper, you prisoner, and shine!

Pink Floyd’s “official” video of the song – – is just over 13 minutes long. The words don’t kick in until about 8½ minutes in. It’s a long time to wait.

Christy Moore’s interpretation, on his 2009 album Listen, is about five minutes: It’s the barest of bare bones.

Moore sings the first line unaccompanied and then his long-time guitar accompanist Declan Sinnott comes in on “shine on…”. Sinnott also sings harmony on some lines. The result is heart-stoppingly beautiful.

This is one of the songs I would want on my desert island. I should confess here that I’ve sometimes been rather cynical about Christy Moore. I love his music – most of it – but at times he’s struck me as the chameleon’s chameleon.

Think of a song, almost any song, and there’s at least the ghost of a chance that he’s covered it. I’ve seen him perform a number of times.

Back at the dawn of time (around 1970) w the Aclet Hotel folk club in Bishop Auckland was at its brief zenith, I met him, introduced him on the assemblage of Cameron’s beer crates that we called a stage, and sank pints with him afterwards, though with enough nous not to try to keep up with him. He was a wild man in those days, hard-drinking and unrestrained. But I often felt that there was something calculated about it all.

He was never quite as out of control as he appeared and sometimes teetered on the brink of stage-Irish caricature.

His talent, which was and is massive, deserved better. His rendition of “Shine On You Crazy Diamond” is the real thing. He caresses the words, turns them into an unsentimental but unabashed love-song. And was there ever a more evocative metaphor than “the steel breeze”, the cold wind that blew Barrett hither and yon but also the razor-edged delicacy of the music he made? Sinnott’s equally delicate guitar work is a flawless counterpoint.

The song needs no more. There’s a curious story told about the day the band was recording Shine On. Unannounced, Barrett (who died in 2006) wandered into the studio. He’d shaved his head and put on a good deal of weight and for a while no one recognised him. As he sat quietly in a corner, each assumed he was a friend of one of the others. As it finally dawned on them who it was, Roger Waters broke down in tears. When he, Gilmour and Wright asked Barrett what he thought about the suite they had written for him, he replied that it sounded “a bit old”.

I wonder what he’d have thought, had he heard Christy Moore’s version.

The Christy Moore version seems to have disappeared from the post. This is it:
https://www.youtube.com/watch?v=-tZjbWkOjb0

Probably when I fixed that typo. Format can be a nightmare . Will fix this