For Bill read Belinda and listen to her Wonderful Fairytale: 'not very trad, but very me' 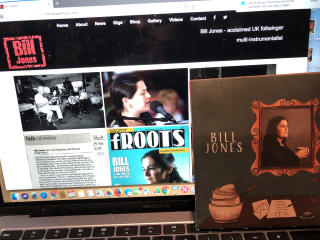 Some years ago, I acclaimed the first album from Bill Jones - sorry to be namist about this but she signs messages with the much more appealing Belinda - and later criticised another.

I have felt rotten about it ever since; it was an honest judgement in each case but perhaps reviewers who actually like the art form they are considering should generally be happiest when able to praise, though it would be fair to wonder how many are.

Now comes another album and I fell in love with it on first hearing.

Bill/Belinda and I have never met but we get along quite well electronically.

Though she hails from Staffordshire, she has lived in Sunderland for most of her adult life - in itself a plus in my eyes, though I grew up 20 miles away - and has three sons, of whom one, (Dom) is, as he should be, Sunderland AFC-mad.

Like me, he will be at Wembley for the League One playoff final on Sunday (May 26), when I should really be in France and he should be at his mum's gig in Chippenham.

B/B's new album, Wonderful Fairytale, has elements of fairytale. And yes, it is wonderful.

That is not to say that it will necessarily appeal to people who feel the UK entry in the 2019 Eurovision song contest should have won instead of finishing last, or indeed that the winning Dutch entry took music to new heights.

To paraphrase what Kate Rusby said to me when she was younger (I was already getting on), it's great that not everyone actually appreciates folk music, that's its a rare diamond to be sought after and cherished.

Wonderful Fairytale arrived with a note from B/B saying, "not very trad but very me - greetings from Sunderland".

That brings Kate Rusby to mind again: lots of her work that sounds traditional turns out not to be but composed by her or someone else. Wonderful Fairytale feels like the traditional work it mostly isn't.

There is a discreet beauty to Bill Jones's singing. She hits all the right notes without being a diva. Sometimes, it seems as if she is just doing it for fun and has no lofty ambition to reach a massive public.

But the voice and accomplished musicianship (piano and accordion, aided and abetted by a fine session ensemble) come together with warmth and charm.

The new album has more than one track that I'd call a winner.

I appreciate the way the title song mixes B/B's original composition with a chorus based on Lavender Blue. The Wear County Line - no, as the singer acknowledges, Wear is not a county and there is no train or bus service by that name - is as gripping as was Turn To Me, the title track from that memorable debut album. 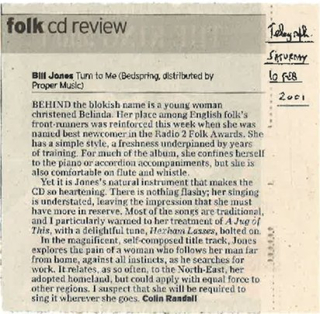 But B/B saves the best for last, a spellbinding version of So Here's To You, instantly recognisable as belonging to the "parting glass" family of songs signalling departure,

It was written by Alan Bell, the singer, composer and revered organiser of the Fylde Folk Festival in Lancashire who died recently aged 84.

For Bill Jones, there is a poignant reason for its inclusion; Alan "took a chance and booked me for Fylde" at the start of her career.

If you enjoy this album half as much as I do - and my copy is stuck in an old Mac and won't come out - you'll be glad you have it.