April 2021 update: This interview appeared in 2018 but is fascinating conversation with a woman who shows French music can travel after all. <Maya, my granddaughter, is now 12 and still adores her ....

Some time in 2017 the French singer Jain was quoted in France as saying the follow-up to her excellent debut album Zanaka would be released at the end of that year or in new year 2018.

Knowing that we - Jain and I - had lived in the UAE at about the same time, I offered to write about her for The National, Abu Dhabi. So began a laborious process involving a stream of approaches to the Paris and London offices of Jain’s record company, Sony.

The mission often looked like a running into a dead end.

But finally, my efforts paid off and a phone interview was fixed. Release of the second album, Souldier, was delayed - it hits the shops on Friday - and my article was published as the cover feature of The National’s arts section last Sunday.  My thanks to Elodie, Dylan, Quentin and others at Sony ...

I like Jain, if not quite as much as does my nine-year-old granddaughter, Maya, who may even be her biggest British fan.

This - admired by a granddad and a small child - may not fit the image Jain seeks to cultivate; she has already ditched the pretty black dress with Peter Pan collar that she always wore on stage, in favour of a more power girl blue jump suit.

And she told France's top Sunday newspaper, Le Journal du Dimanche, that she was fed up with the thought that anyone who seemed nice and smiled a lot was not to be taken seriously. The National piece can be seen at this link. It was based on the following interview .... Question: firstly, congratulations on your first album, Zanaka, which I thought was outstanding. How much of a challenge has it been to make the second album reach the same standards and do you feel you have succeeded?

For me the challenge was making something different with other influences, not the same kind of music but to progress to something else, while keeping the same emphasis on melodic songs. Have I succeeded in that challenge? I don’t know – I am waiting for the album to appear and see what people think about it. But I am really proud of it, and of the way I have combined maybe more Oriental and Congolese influences

Why Souldier? What is your combat?

When I started making music, I wanted to enjoy it and make others enjoy it. But it’s just music. I am not saving the world. I’m not trying to create utopia, just a place where anyone can feel special. The last few years have been so sad around the world and I just want to make music to make people feel happy.

Going to the UAE for the first time was a real cultural shock. Everything was different.

People didn’t speak my language, it was all new, a huge change. But I loved it. I was young. It was about fun.

Then we moved to Abu Dhabi after living in the Democratic Republic of Congo. I knew it would be the last time I’d be living outside France so I wanted to enjoy it the best I could.

The song was my homage to the city. I did my Bac there and it means a lot to me.

You don't hear so much of the musical influences of Abu Dhabi in France or, say, the USA and it was a big challenge for me to incorporate western music and talk about the place in my song. Abu Dhabi was a great experience.

I loved the Corniche, watching the sun go down on the ocean. I really want to go back.

Zanaka was full of seriously good, memorable songs – Come, Makeba, Heads Up - but also others with the power to grow on listeners (my little granddaughter always demands Hope, Hob, You Can Blame Me and Lil Mama in the car). Do you have favourite tracks on Souldier?

Not yet. Every song on this album complements the others so I want the songs to be seen as a combination, the whole album.

You are French. Why do you sing exclusively in English? Because it’s the language of pop and rock - or for other reasons?

Yes it’s the language of pop and rock but also the language of travel. I try to make my songs travel. I have a lot of friends who speak English but not French and I want them to understand me, but also people in the English-speaking world, in South America etc. It’s my way of communicating with people.

I have written at my own music website about people like you, Cats on Trees, Imany, Christine and the Queens and others destroying the old claim that French music doesn’t travel. But much of it is also in English. Any thoughts on that observation?

It would be much easier for me to sing in French. That’s my mother tongue and the language I use daily, but I prefer to sing in English because that's simply how my music expresses itself best.

Do you a clear idea of your musical genre?

Not really. I can be seen as a pop singer but I just want to be free to make any music I want.

You are so well travelled in your life: born in France (Toulouse), living in Dubai, the Congo, Abu Dhabi and then Paris. Do you feel completely French or have those countries influenced you as much as their musical forms?

I consider myself French. I was born here and live here. France is my cultural identity. But when I was as French person outside of France, knowing I was French but not really feeling French, it was difficult. But I stopped asking myself the question when I started writing songs.

Describe the contrast between the UAE and Congo-Brazzaville?

Oh, very, very different. Two extremities – Dubai, so rich with lots of business, the Congo so poor – and there seemed nothing in common. But it helped me broaden myself, to learn different values. I could not have asked for a better childhood.

Did you learn any Arabic and what cultural influences from the UAE have stayed with you?

I knew so little about the culture and music and culture of Dubai and Abu Dhabi. I did Arabic classes in Dubai – I wasn't the best in the class but I tried. It was very interesting and has influenced me in my writing. I even learned to play the derbouka (percussion instrument) in Dubai. Music opens doors. 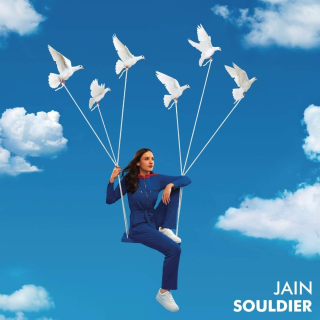 You can buy the album using Salut! link to Amazon by clicking anywhere on this sentence

You have an interesting mix of family origins, French father and your mother’s father was Malagsy. Does this help explain the African aspect of your singing style, or does that comes directly from living in the Congo when your musical identity was maturing?

I think both. My mother listened a lot to Miriam Makeba. I heard lots of music when we lived in the Congo. People say I have a French-African-American accent when I sing but I don't feel it. It’s just me

Jain means a follower of Jainism and the guiding Jainism principle sometimes attributed to you is “don’t be sad to lose, don’t be proud to win". Is that your own philosophy and does that religion interest or embrace you?

I found those words when I was 16 and thought they were really beautiful. I just want my music to travel, to be shared. That quotation really reminds me it is not the most important thing in life; it‘s just making music.

You once said your musical development was a way of expressing and affirming yourself but also a refuge. What did you mean by that?

When you are French but live outside France, far away, you have to make new friends, go to new schools and can feel a little bit lost. Outside of France, knowing I was French but not really feeling French, it was sometimes difficult. Music was my refuge and I stopped asking myself these questions when I started writing songs. Sometimes you can feel a little alone in those travels. Music helped me to share and be happy.

Your own musical influences?

I like how it moves. Lots of of good things happening. I am finding lots of new bands and you can find so many new exhibitions. What don't I like? The Parisians don't always seem to be in a good mood!

Nina Simone or Miriam Makeba – That’s hard. Makeba because I heard so many of her songs in my childhood.

Rolling Loud Festival Miami, or Interceltique Lorient – I know of Rolling Loud and would love to go but let's say Brittany because I love to try new ideas in music.

You love art: Louvre Paris or Louvre Abu Dhabi – I have been to the Louvre in Paris a few times so I shall say Abu Dhabi, which wasn't built when I lived there.