Home Archives Profile Subscribe
Songs you cannot get out of your head: from Linda Thompson and Sandy Denny to Dolores O'Riordan, Nic Jones and Kate Rusby
The Big Interview: Jain, une exception française 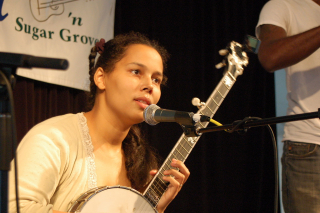 Why has Salut! Live been silent? It is a long story but can be told briefly. I was pleased with the way things were going here but the number of visits to the site (ie its readership) simply did not seem commensurate with the time and effort devoted to it.

To be listed at newsnow.co.uk, as two other sites of mine are, would have made a difference. Newsnow collects and categorises headlines at websites and blogs. It has a large readership so, for example, Salut! Sunderland's hits are massively enhanced because its articles are shown there in headline form. I value and appreciate that help. Salut!, the parent site, is more difficult to categorise but still benefits significantly from appearances at newsnow.

I was naive enough to feel we were doing more than enough at Salut! Live to justify acceptance by newsnow. It was not to be. The reasons for rejection were certainly debatable but that's not a debate for here. I do wish to keep the site alive and I do believe it has lots to offer lovers of folk and folk-related music, with a strong archive of material and endless scope for discussion.

For now, I will just allow a great friend Ian Evans, first met on holiday in Peru but a kindred spirit on so many levels, to revive the popular Cover Story series. Here, Ian compares versions of Richard Farina's powerful song about one of America's many shaming incidents, the bombing by Ku Klux Klan lowlife of a Baptist Church that killed four girls ...

Instead they left their blood upon the church house wall, their spattered flesh and bloodied Sunday dresses torn to shreds by dynamite, victims of racial prejudice in the Deep South.

From this incident comes the song Birmingham Sunday written by Richard Farina.

Farina was a regular on the Greenwich Village folk scene in the early 60s and married Joan Baez’s sister Mimi.

He died in a motor cycle accident in Carmel, California in 1966 at the age of 29 on his wife’s 21st birthday.

Some critics thought that had he not died so young he would have given Dylan a run for his money.

His version of his own song has a simplicity and naivety both in terms of the guitar playing and the singing.

The first version of the song I heard was that of Joan Baez on Joan Baez/5 released in 1964.

The album liner notes described the song as "beautifully understated" and "so softly sung", which is probably a fair description of the recording.

Joan Baez’s guitar playing is more accomplished than that of Farina but her voice was still in the shrill stage before she lowered her register as she became older. I now find the young Baez’s voice a distracting irritation.

In 2017 Rhiannon Giddens released a version of the song on her Freedom Highway album.

Compared with the earlier versions of the song, the whole production and arrangement are vastly more sophisticated and her voice has much more character, depth and timbre augmented by superb background vocals and organ playing.

The overall effect is a richer sound which does more justice to the sad and brutal events and adds to the power of the song written by Richard Farina.

For me Rhiannon Giddens is a clear winner.

One interesting contemporary tail piece to the story occurred not long after the release of the album in the UK.

It concerns Doug Jones, a well-known Alabama lawyer who secured the conviction in 2002 of two Ku Klux Klan members for the murders.

On 12 December 2017 he was elected to the US Senate by a margin of 1.7 per cent of the votes, to become the first Democratic Senator for Alabama since 1992, an event that occasioned much interest even outside the US because of the Trump dimension.