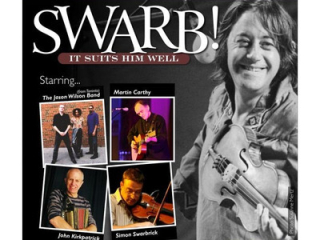 I shall be on the last day of a short trip to Havana when the tour - Swarb! It Suits Him Well - kicks off on Friday January 19 at the Ulverston Sports & Social Club in Ulverstone, the south Lakeland Cumbrian market town that was the birthplace of Stan Laurel. The musicians are Jason Wilson Band, Martin Carthy, John Kirkpatrick and Swarb's nephew, Simon Swarbrick and tickets can be bought for £16.50 a head at the relevant part of this link.

The tour has been organised with srong participation from Jill and one of the performers, Jason Wilson, a Canadian historian and singer/multi-instrumentalist described at good old Wikipedia as "known for incorporating jazz and Scottish influences atop a reggae foundation".

"He may not have wanted a funeral," says the blurb, "but he didn’t say anything about a Wake! So, they are giving him and his friends that party and everyone around the UK the chance to raise a glass in salute and share many very happy memories of the great man." My glass will be raised but may contain mojito.

In honour of Swarb's memory, I have today added a sub-section grouping links to various articles published at Salut! Live and one at its parent site, Salut!.

Headed Swarb Remembered, it and can be found by scrolling down the sidebar to the right of this item and appears just after the list of Cover Story features and the live feed showing you where in thr world visitors to this site come from and what they look at while here.

The other tour dates are:

Happy Christmas (or whatever festival you celebrate at this time of year) from The Goose! The Swarb Tribute Night is sold out, but @Save_Ivy_House will be running lists of people who want tickets and those who have tickets they can't use. https://t.co/YERAOvZFTS