Cover Story: (37) Heart Like a Wheel. Mary Black, the McGarrigles or Linda Ronstadt 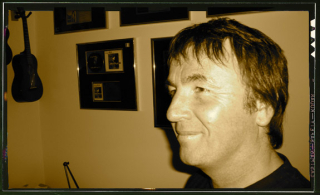 For once, I really have no strong opinion. I love Mary Black's singing and I love the McGarrigles (Anna and the sadly departed Kate).

Linda Ronstadt has a great voice. It's just that I have no special love for the song Heart Like a Wheel; it's pleasant enough but doesn't do for me for what it clearly does for so many others. That's the nature of individual musical tastes.

But this is not my Cover Story item.

It belongs to Frank Gallagher, a great musician and producer who also happens to be a friend.

When writing about Frank's marvellous production of Streets of London, featuring its originator Ralph McTell but also Annie Lennox and the Crisis Choir, the proceeds going to the Crisis UK charity for the homeless, I invited him to come up with an entry for this series.

Some are so iconic it seems insane to attempt them.

Brady and Irvine must have had just about every track done from their album, so perhaps that itself could be a special feature (great idea, Frank, and a new found Irish acquaintance, who probably regrets choosing as a lad to support Sunderland AFC but is stuck with it, has just given me a copy to replace my long-lost vinyl).

Mary Black never actually recorded it but I often induced a late night rendition from her while accosting a hotel bar piano back in the day.

There have been many covers of the the McGarrigles' original, from Linda Ronstadt to Dolores Keane, the Corrs and countless others.

But for me, the wistful honesty and straightforwardness of this tops them all.

Colin Randall adds: for the sake of completeness, I must add the other versions mentioned in my headline.

Then there's Linda: And finally - though you may wish to speak up for other versions - there's the McGarrigles and Linda together ... Since I have excluded myself from the debate, it's over to the Salut! Live jury. I'll just wander off and listen to the McGarrigles at their best - Complainte pour Ste Catherine - or Mary Black singing Annachie Gordon. But do check out Cover Story by clicking anywhere on this paragraph. This is the 37th instalment and it's not my work alone so I feel entitled to say it's a cracking series ...

The first song Anna McGarrigle ever wrote. I think it's stunningly beautiful, as are both the sisters' and Linda Ronstadt's versions. But the three of them together... wow! That's gorgeous.
I saw the McGarrigles perform in Toronto a couple of times and have always been knocked out by the purity of their voices and the almost ethereal plaintiveness that they could bring to a song. I'm going to throw another one into the mix - "Hard Times Come Around No More," from the U.S. Civil War, performed with Kate's son, Rufus Wainwright. Brings me out in goosebumps every time I hear it.
https://www.youtube.com/watch?v=4YrfLnlrquo

I'd only ever heard Linda Ronstadt's version before, so the comparison was interesting. But based on these three samples, Linda's is the best - she just has the best voice.