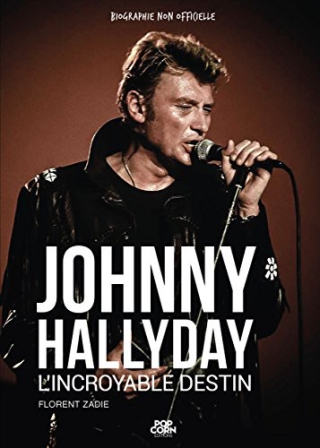 Buy this book at the Salut! Live Amazon link here

This has just appeared at another of my sites, Salut!. It is the promised Robb Johnson follow-up to his 2007 epic on Johnny Hallyday, reproduced here after news broke of Johnny's death at 74.

In the last five years of his life, it was like Johnny Hallyday was back from the dead, on borrowed time, absolutely focused on reestablishing the authority of the Hallyday legend and surpassing it with three albums of unquestionable, breathtaking excellence, and performances that represented the very epitome of what Hallyday and rock 'n roll, had come to represent.

Things had come apart with the 2009 Route 66 tour. I thought the band were manifestly nowhere near good enough. Hallyday looked frayed, almost unsure of himself. Whether it was a botched operation or far too much vodka, Hallyday ended up in a medically induced coma.

The first signs of life are a stripped down back to basics album, Jamais Seul in 2011. On the album sleeve, Johnny looks his age, particularly when hanging with the young guns who provided the musical soundtrack that meant well, and had you wanting to like it a little more than you actually did.

But the main thing was this was a clear statement, a return to some sort of rock 'n roll ground zero, and Johnny clearly wasn’t bothered about looking young anymore.

He had lately been looking eternity in the eye and wasn’t about to let it get the better of him. So he gave us L’Attente in 2012, which was absolutely superb, surpassing all expectations, an assured set of immaculate performances of quality songs, followed two years later by Rester Vivant which was - blow me -an even greater album, what with its magnificent, swaggering title track (at last featuring a definitive rock 'n roll guitar solo from longstanding top sideman Robin Lemesurier) and a song that epitomises the grandeur of the chanson tradition, Seul, an aching delineation of the human condition in somewhere around three minutes.

And then, the Rester Vivant tour in full gear and shaking the very foundations of stadiums across the French-speaking world, Hallyday releases De l’Amour a year later, an utterly delightful and almost nonchalant collection of excellent songs that inhabit the borderlands between rockabilly and folk.

The title song is an absolute delight and there is an impassioned Black Lives Matter song Michael Brown (reminding us that when Marine Le Pen’s equally repulsive if rougher-round-the-edges old man looked like winning the presidency, Hallyday posted on his website that he had always stood for inclusion and so asked that people vote for The Republic, not the FN), and a truly moving, gentle song about the response to the Charle Hebdo massacre.

And now that’s all there will be from this truly great artist.

I went to Paris to see the last tour twice, it was that good.

I also saw Hallyday twice at the Albert Hall in 2012, which he said were perhaps his favourite concerts. We all went on the Monday. We’d got seats halfway back on the floor of the hall. Never been so close to Johnny before. Shorn of all the lovable stadia video screen tomfoolery and effects you need to make sure you communicate the spectacle to the back of Bercy and beyond, his performance was even more impressive. Sheer visceral rocknroll.

We got back to Hove, UK exhilarated, only to find in the inbox an offer of unsold front row seats for the Tuesday. We couldn’t afford all four of us, but the next day, Meeta and me are sitting in the front row of the stalls, and Johnny and the band are just there in front of us, as indeed within two songs were a whole load of large Swiss blokes.

I watched fascinated. I am this close to the legend. And up close, the legend is even more impressive.

Johnny was clearly having the time of his life, delighting not only in the enthusiasm of the fans and the proximity of everything that made everything so immediate (I bet if they had put this size gig on in France there would be at least a crash barrier in front of the stage and a bit more security than an old bloke in a blazer) but also in the playing of his band mates.

He had, without making a big deal of it, such generosity and humility with regard to his art. He loved and respected the playing of the musicians. And he loved and respected the community of the audience, as he walked up and down the wings of the stage, embracing & high-giving and fist-bumpingw every audience member he could get to - and not just the pretty ones. Everybody was included.

So when I read the sneery Anglo-centric xenophobic inability to understand the immensity of Johnny’s dying, I think they can just bog off, because they have no idea what they’re sneering at, they weren’t ever there, like British rock 'n roll hasn’t really been anywhere close either since I can’t remember when (Cliff the British Elvis anyone?), while I was lucky enough to have been in the presence of the very finest of both French popular culture & all our rocknroll dreams made real since I first encountered the art of Johnny Hallyday maybe 25 years ago.