Home Archives Profile Subscribe
Cover Story (32): Fairytale of New York. The Pogues or O'Hooley and Tidow
A happy Christmas from Salut! Live and that inspired reworking of Streets of London 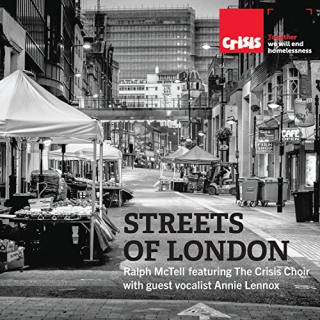 For two special editions of Cover Story, Salut! Live's series on different versions of the same songs, I am in the hands of a good friend Frank Gallagher, an exceptional musician and musical producer I first met through his work with Mary Black.

Frank does not know, unless he read the relevant piece, how I massacred Streets of London in my first taste of public performance in decades in the south of France earlier this year.

But now he tells me he is the producer of one exceptional new version, with the song's composer Ralph McTell joined by the redoubtable Annie Lennox with massive help from the choir of the charity Crisis, which works to combat homelessness and help its victims.

McTell has said the stories in the song were based on his experiences in Paris when busking in Europe as a young man but changed the title from Streets of Paris because he realised he was also singing about London. I had always though the second verse - "Have you see the old girl..." - referred to a woman known as Soho Meg, who could be seen walking the streets of London's West End in the late 1960s.

Not everyone rates Streets of London. For me, it is a good song with faults; perhaps the lyrics might have profited from minor editing. There are other McTell songs, from a vast repertoire, that I prefer, including From Clare to Here, Last Train and Ride and Spiral Staircase.

But its heart is in absolutely the right place and this is a wonderfully moving production. Its release at Christmas is a fitting gesture in our current troubled times and I hope it raises funds for Crisis.

Frank's own comment includes a request that applies to all who read this article: "If you can’t beat the original, then just re-do with a guest. I’ve just produced this for the homeless charity Crisis. Share at will: https://youtu.be/q4OV54nb_Kw ..."

* Please do share. And if you would like to buy it and help the homeless at the same time, go to Ralph's site at https://ralphmctell.tmstor.es/cart/product.php?id=35935&cur=GBP and it can be yours for under four pounds.

Or stream it at Spotify: https://open.spotify.com/track/4v0KqMqzW4PPXzck6nqKGy

From some touching comments left at youTube - not always a forum for eloquent discussion - I offer these:

Gary Lonergan: "If it was possible to make a song even better the Crisis choir - who know all about being homeless on the streets of London - have done it. Wonderful﻿."

Sally Beckham "Very moving. Homelessness is a terrible situation here in San Diego, too. I shared this beautiful video."

Duncan Hall ":This should be Christmas number 1. Great song, great cause: let's get people talking about homelessness instead of who won the X Factor.﻿"

And here, finally, is the clip that has been viewed more than four million times ...

* And there'll be another Cover Story contribution from Frank Gallagher on these pages soon.

This song always gives me chills ... vivid memories of singing it in assembly at my primary school in north London.