Cover Story (32): Fairytale of New York. The Pogues or O'Hooley and Tidow

Roll up for the 32nd instalment in my series Cover Story , which looks at different versions of the same songs ...

Why am I even bothering with Fairytale of New York? As good a Christmas song as you'll encounter, a stirring melody and chorus plus Shane MacGowan's eloquent portrayal of being down and out in NYC, executed with punch and panache by the Pogues and Kirsty MacColl.

Nothing, on the face if it, to dislike. But it has been done to death by excessive airplay and as many people now cringe as cry for joy when it comes on yet again. But there is a good reason for my interest to perk up, a new interpretation that deserves serious attention. 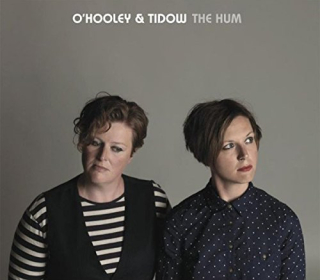 Belinda O'Hooley first came to my notice as part of the marvellous Tyneside band, the Unthanks.

Look them up in the search box at this site and you'll come across an extended interview with Rachel U plus lots of complimentary mentions, long before the mainstream media began to catch up.

I remember a sense of disappointment when O'Hooley left the band as I thought she added a lot. But life goes on. O'Hooley - and I must get as many reference to O' into this piece as possible to make up for initially omitting it from my reference to her when introducing Bill Taylor's look at Christmas songs - now plays in a duo with a fellow Yorkshire-Irish singer and musician, Heidi Tidow, who also happens to be her partner.

They have released a rather unusual Christmas album, WinterFolk Volume 1 and it includes a sumptuous reworking of Fairytale.

I cannot comment on the rest save to say that it covers subjects of seasonal significance but bleaker than midwinter weather: domestic violence, the absence or loss of children, global warming, poverty, religion, migration and loneliness.

"The Mount Everest of Christmas songs," they say themselves of the attempt to wrest ownership of MacGowan's song from him, his band and the late MacColl's legacy. "Were we mad to cover it?"

In honesty, I did fear they'd run into trouble in the Nepalese foothills, let alone when trying to scale the more challenging heights. I need not have worried. O'Hooley's piano accompaniment is perfect; the harmonies are divine.

Not all will agree with me but I feel the mountain has been conquered. As I write, all of 623 people have looked up the O'Hooley/Tidow YouTube clip, some way behind the 54m for the first two listed videos of the original, and I do not expect the gap to narrow enormously as a result of my approval.

And since no one ever goes from these articles to the Salut! Live Amazon link, why not - if you like the version enough to feel inclined to buy the album - do so at the duo's own site?

Sumptuous, gorgeous but well-nigh impossible to compare with the original. O'Hooley & Tidow turn it into a completely different song; half of the lyrics and all of the conflict and raw-edged... New Yorkness, for want of a better term, are gone. It's not so much that they've conquered Everest as made it to the summit of another peak, equally as high and challenging. Mount Chalk and Mount Cheese.
To look at other versions, the song has (almost inevitably) been covered by Christy Moore.
https://www.youtube.com/watch?v=FwXBtmRTsFs
Heartfelt and (also inevitably) not at all bad but not entirely successful. It really does need to be done as a duet. Rejigging the words, as Moore had to do, takes away much of the impact.
I have a soft spot for the version done by Gianni & Sarah - Walk Off the Earth's Sarah Blackwood and Gianni "Luminati" Nicassio.
https://www.youtube.com/watch?v=7gzJFwB0JzE
This is not just because they come from close to Toronto. They've put their mark on the song while keeping it true enough to the original to make for a legitimate comparison with the Pogues' original.
Maybe I've heard Shane MacGowan and Kirsty MacColl sing it once or twice too often but I think I prefer Gianni & Sarah's rendition. I certainly like Blackwood's voice better than MacColl's.

Bill - really like the Gianni and Sarah version - not 100% sure about the reggae type rhythm when he goes into the verse and the pronunciation of Galway is a bit odd. But minor quibbles - a lovely version - refreshing. Not keen on the O'Hooley and Tidow one although I generally like what I've heard from them