Home Archives Profile Subscribe
Dipping into the Past: the beauty and power of English folk yields a personal top 10
Potted Sharon Shannon

Dipping into the Past: Sharon Shannon - the Salut! Live interview 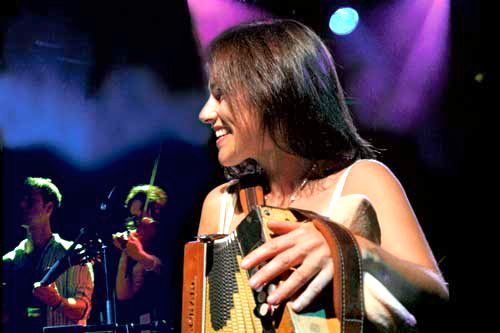 Please forgive Salut! Live for yet another dip into the past. I am working on a new article in which Sharon Shannon features prominently so it seems a good moment to begin by reintroducing readers to a giant of traditional music. Shannon is a woman whose technical authority is matched, surpassed even, by her extraordinary inventiveness and thirst for experiment, but who remains steadfast in regarding Irish music as always the essence of her art. I can think of few figure in music who, when their various contributions are totted up, have given more pleasure. I will add a clip, from about the same period of this interview that show what she brings out of others ...

The telephone rings. Sharon Shannon is fashionably late, but the County Clare brogue is instantly recognisable. And she's in a chatty mood, covering much ground from details of her new album Saints and Scoundrels (Independent Records, out now) to the difficult territory of her long-term partner Leo Healy's sudden death last year.

If I can still locate them, I shall also re-post Potted Sharon, her quickfire answers to Salut! Live's quickfire questions - something of a tradition when this site conducts the big interview - and a review of the album.

Salut! Live: Hearty congratulations on your Lifetime Achievement award at the Irish Meteors. It is hard to believe the young woman I saw billed as a teenage accordion sensation when she was in Arcady has now put 22 years into the industry.


Yeah, it's great. I am really, really amazed at how well and how long it has all gone. Delighted - and absolutely honoured by the award. I couldn't believe it.

A recent article in the Evening Herald, Dublin starts with the assertion that everyone thinks the world of Sharon Shannon. I certainly haven't come across anything other than admiration. Are you aware of the fund of goodwill and does it carry certain responsibilities for you as a performer?

I suppose I have rarely seen anything negative, which is brilliant. So far, so good. It really helps when your work is well received and yes I do appreciate people saying nice things. I find performing really enjoyable anyway, especially if the audience are enjoying themselves. I don't feel obligated or under pressure as a result but that does make it very easy for us. Vice versa: if they aren't having a good time, it won't be an easy gig.

Saints and Scoundrels is a great name for an album. Who are your Saints in music, any genre?


There's a bit of the saint and bit of the scoundrel in everybody. I don't think in terms of revering anyone but I do like the people on the album. I really admire people who dedicate themselves to music and work hard, like for example Mike Scott (Waterboys), who is so dedicated and works so hard that it's inspiring.

That was meant to be the easy part. But who are the scoundrels?


There is not one person who has only a saintly side to them or only scoundrel. But it's only meant to be a bit of fun in any case. I suppose people would regard Shane MacGowan as the ultimate scoundrel but you know, he's a big softie as well. I suppose I've ruined his reputation now. But I've been doing live work with Shane for the last three years and it was brilliant to have him on the album. I love the song - Rake at the Gates of Hell - which is a great last track that sums up the whole album.

I imagine a lot of people close to Leo Healy will have been touched by your decision to dedicate the album to him, much as you are determined not to trade in any way on his memory. Would you care to pay some form of tribute to the man and the musician who, as you have said, had the idea for the album in the first place?


I wouldn't know where to start. It would take hours. Leo was a really passionate music lover. He'd be rooting for the album; in fact, I am sure he was doing so, guiding us from wherever he now is. If I started to tell you about Leo, it would take me too long and take over the whole interview. He was just a really good, loving, amazing person.

Only one further point on a subject which must be acutely painful for you. I wrote recently about an English footballer, Jody Craddock, who found his gifts as a painter helped him enormously after his baby son was a victim of a cot death. Did music provide some kind of therapy for you?


Let us leave it there. On the new album, there is what we have come to expect from Sharon Shannon: great tunes in the traditional idiom and lots of variety with a string of guest performances. It must have been particularly pleasing to play again with the Waterboys, but what other tracks give you special thrill?

I adore that song (Saints & Angels, with the Waterboys). And then there's Imelda May, who recorded her song (Go Tell the Devil) in the middle of a 60-gig tour. She was at Limerick on the Wednesday, Galway on the Thursday. My studio is just outside Galway on the Limerick road and she suggested dropping in on the way to the Galway sound check. The whole band did just that, recorded the song in a few hours and went on to the sound check. They worked really hard and made so little of it, making it feel so easy. Imelda wrote the song especially for the album; we'd only met once but we had a few phone conversations and she sang it down the line to me.
It was just so brilliant. I admire her get-up-and-go spirit, with no airs and graces, She is completely down to earth with such a work ethic.

I make no apology for seeing you as one of music's great inspirations, in any style, not only for the music you play yourself but for your innovative spirit and a rare ability to bring together disparate singers and musicians to collaborate with you. What is the most important part of your work for you?


I adore Irish traditional music. That's the music I was brought up on and it's the most important part of my music. I love bringing it to a wider audience by incorporating it with more modern, popular music. I love seeing really young people who would not normally be interested in it getting up, going mad and dancing to jigs and reels. Definitely for me, it's the base, the tree trunk, the backbone of what I do. I would never not be involved in that kind of music.

Has there ever been a time when you've regretted not pursuing your university education (Sharon dropped out while studying Irish and German).

Never! There are people like the American comedian Des Bishop, who speaks Irish very well, who are doing wonderful things for the Irish language, making it very cool. I love that. I do understand Irish but am not that great at speaking it. German? I don't know hardly any!


Lots of different influences on the album: Chile, tango, waltz and I think I even detected a jug band theme. But where did the the Small Faces come into it (The Cartoon Thieves' Mama Lou with a hook suspiciously like Sha La La La Lee.


The Small Faces? They're new to me. Must check them out

None really. I don't actually sit down and decide I want to do this or that thing. I have tended to let things happen day by day and don't having any driving ambition. 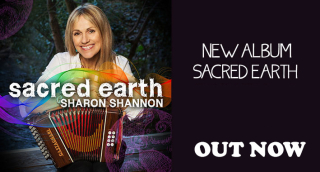 Picture: by Peter Shaughnessy for the Sharon Shannon website Coming soon with any luck: Potted Sharon - quickfire answers to quickfire questions of topics ranging from drinking to Roy Keane.

Interesting interview Colin (and glad to see you back!)

I think you were very brave broaching the subject of Leo's untimely and sudden death, could not have been easy!

It was uncomfortable, but the publicity material distributed on Sharon's behalf with the CD includes the Dublin interview, which dwells quite heavily on Leo's death. I therefore felt the question/s appropriate, but fully appreciated Sharon's difficulty in answering them. I think we were both relieved to move on.

She is a good box player but then she got the break when she was young and angelic looking. There are a lot of talented musicians who haven't had the luck she has had. I would like to see Sharon compose more tunes. She would have to spend a lot of time alone in order to do that, so that she could tap into the part of the brain were only the best, and most creative go, A Sharon.