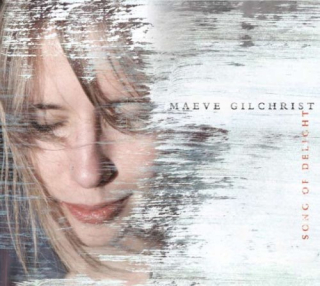 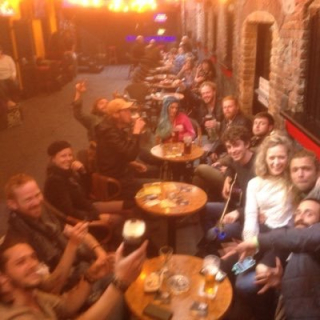 I would love to hear the Pogues do this song! As I said in your earlier post, the lyrics are hard-edged and, I think, need the hard-edged delivery that Richard Thompson gives them. Christy Moore doesn't quite manage it and Maeve Gilchrist - no disrespect to her obvious and considerable abilities - doesn't even get close. It's a pretty version of a song that isn't pretty at all and she lost me halfway through.
I expected more from Galway Street Club (perhaps an early clue to my disappointment was the pints of WATER they were passing around before they started; that would never have happened in my day!) though I love James Dillon's voice and there's certainly potential for a really searing rendition. Doesn't happen here, though; the lineup on stage doesn't produce the depth or volume of sound that seemed to be promised. The occasionally off-key fiddling and harmony vocals don't help, nor, of course, do the truncated lyrics. Still, not bad for a somewhat impromptu live version. Next time, though they could perhaps lose a little of the charm and boost the boisterousness.
There's another version on YouTube by a band called the Whistlin' Donkeys (somehow, that apostrophe speaks volumes). I offer it here simply as a comparison... not a very good one; perfunctory with no real feeling or expression. Just sing the song and move on.
https://www.youtube.com/watch?v=AEDzJ84A9yE
For my money, Richard Thompson's original remains head and shoulders above everyone else. Given that the Pogues are no longer extant, I don't see an obvious contender. Though maybe someone could get the song to Shane MacGowan...

Great comment, Bill, even though we disagree. I think the song works the way the Galway Street Club and, of course, Richard Thompson approach it but also when sung with the panache and, as Joan Dawson put it here in the earliuer discussion, the "softness and the diction" of Christy Moore and, I'd add, Maeve Gilchrist.

If you want more boisterousness and more booze, check out one member, Adnaan - " I’m a farm boy from the Appalachian foothills of New England" - and his enthusiasm for booze and other kinds of street clubbing at https://busk.co/blog/portraits/stories-from-the-pitch/galway-street-club-european-tour/ He'd have been in his element at the Castle or Aclet folk clubs in Bishop Auckland

Oh yeah, I love that! Great version, too, of I Shot the Sheriff. James Dillon is a real talent. Reminds me of the Dropkick Murphys (one of the all-time great names for a band), whose unparalleled live version of Amazing Grace I append here for no particular reason except... why not?
https://www.youtube.com/watch?v=YvwETUv7dSQ

From 'Tiff Toff Tuffin', of the Galway Street Club, comes an explanation of the shortened version of the song:

'Haha he did it [on purpose] for that gig has we had limited time so we cut some verses.
The recording we have has more.'

It does indeed, though several lines are still missing. I would prefer to hear them sing the song in its entirety but they are entitled to make their own choices. As the late fiddler Dave Swarbrick once said when Martin Carthy asked about an arrangement he was unsure of: "Go for it. You can do anything you want with music. It doesn't mind."

I also mentioned (now deleted) that I could locate no Galway Street Club recording of the song. There is one after all, TTT tells me:
.
'Hey man just seen you're article there on the street club! Thank you very much it's really appreciated it. You mentioned you can't find a recording of Beeswing, I have a file of the cover album we did in summer and Beeswing is on it,
https://drive.google.com/drive/mobile/folders/0B7erAJIHONblb3AxS29DWWJnVWM?usp=sharing ... '

It's well worth a listen.