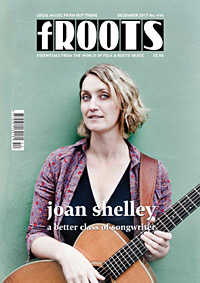 It went to the fRoots survival fund. My friends who help put the site together may be aghast when they find out, or they may applaud (the one I have told so far has started the applause).

You may have read here recently that this estimable monthly magazine, fRoots, is finding it a struggle to make ends meet. Quite apart from the issues facing all printed publications, theses difficulties are little surprise when it is noted, for example, that a band featured prominently on its pages then repaid the honour by including mention of it in self-serving, paid-for advertising - elsewhere.

fRoots - how I preferred it calling itself Folk Roots - deserves so much more loyalty from the music it serves and promotes.

Ian Anderson, the magazine's founder and its editor for 39 years, feels it's time to hand on the baton but can do so only if the magazine is viable.

So he launched a Kickstarter appeal, a crowd-funding initiative of the sort the mostly labour-of-love Salut! empire might usefully try one day.

The snag is that an initial target must be set, and it must be met if the donations made towards it are to be passed on.

fRoots chose to make that target £20,000 and the response has been wonderful

. The last time I looked, the amount raised stood at more than £25,000; the link to follow if you wish to make a donation large or small is https://www.kickstarter.com/projects/iananderson/save-froots-magazine/posts/2051212?ref=backer_project_update

Let Jo Breeze, describing herself as a "collaborator" but not in the 1939-45 French sense, take up the story so far:

We did it - already!

"We've been absolutely thrilled by the astonishing response to our appeal so far: we hit our initial target of £20,000 in under 3 days, and Kickstarter themselves have designated us as a ‘Project We Love’! To celebrate, we added lots more rewards - if you haven't already seen them, go and check out what's available.

"Huge thanks to all of you who have pledged so far, and of course to all of those who have contributed rewards so generously and keep adding to them. But this is only the beginning. We set that level only because if you don’t hit a stated Kickstarter target, you don’t get anything. At least we now know that everything pledged will reach us, but the higher the total goes, the more secure the future of fRoots could be. How high can we go? £30,000? £50,000? The sky's the limit!

"We’ve added a whole new swathe of rewards at all levels, and there are still a few choice items available from the original list including a fantastic set of festival tickets, some morris dance workshops for groups of six friends given by top dancers Laurel Swift & Alex Merry, tickets for a special talk and Q&A by legendary producer Joe Boyd – plus we’ve been able to add some more tickets for the Copper Family & Shirley Collins house concert which had rapidly sold out, and the very last of the limited edition ‘Folk Not Hate’ bags, now only available this way.

"If you want to change your pledge to pick something else, you can do that all the way through to the end of the campaign; your card won't be charged until 18 December - and remember, if you want to back for more than one reward, increase your pledge to account for the cost of both, then (this is crucial!) message us to let us know what you want. Without that message, you may miss out if the second reward you want has limited numbers, as we won't know to keep one back for you.

"Thank you so, so much for the extraordinary support you've given us so far. If you're able to help by sharing the link onwards, that will help go a long way towards making sure the future of the magazine is as secure as it can possibly be. We'd love to see all these amazing rewards gone!"

The rewards Jo refers to are the albums that are claimable in return for donating.

But if I might be permitted a little emotional old git moment here . . . apart from anything else, the level of support we're getting on the Kickstarter project, particularly from people donating rewards to offer, has got me quite tearful. It's a fact of life that most of the time people only communicate when they want to complain about something but rarely get in touch to thank you for anything. So it has been quite an eye opener to find out how much we are appreciated. I've reached points over the last decade when I've been doing endless long days, haven't been able to take any pay for several years (indeed, put in my own last few resources) - but then only seem to get constant mean-spirited bashing in return from people who think our role in life is just to make them famous - and really wondered why I bother. So MASSIVE thanks for making a tired old bloke feel much, much better and actually valued.