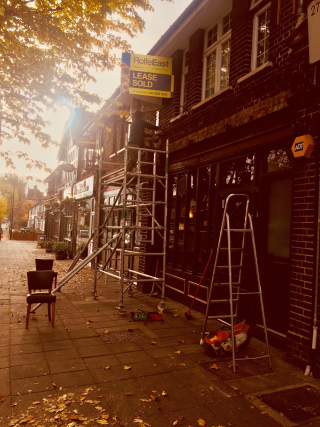 Maya had been to Mustang, too, and enjoyed the experience.

She probably wouldn’t have known about the sensational marinated lamb chops, their speciality and one of the reasons I had been licking my lips in my final few weeks in France before the return for London hibernation.

But just before that return, Mustang closed and an Irish caff, displaced from premises in a part of neighbouring Hanwell due for redevelopment, reopened in its place.

The man who ran Mustang always assured me things were going well but Irish caff seemed to be doing better midweek business than I remembered him managing.

I do wish them well and will doubtless pay a visit, overcoming my disappointment at the loss of the finest Ealing had to offer.

Next day, as I was passing the restaurant, a man I took to be the gaffer was outside, busy with preparations to erect the new name.

What would it be, I asked? "The Croppy Boy," he replied, and he was impressed by my instant recognition of its meaning for an Irishman.

And there at last we have the subject of the latest edition of Cover Story, our grand series comparing same songs, different versions. Irish songs of rebellion have me in two minds.

As a young folk club organiser and (eminently missable) floor singer, I'd sing The Foggy Dew, The Irish Soldier Laddie and Kelly the Boy from Killane, songs gleaned from records by people like the Clancy Brothers or The Dubliners.

Later, I warmed to The Town I Love So Well, Phil (Puppet on a String) Coulter's song describing the impact of The Troubles on his city of Derry.

I still sing along to it in the car. But I would no more want to join in on or even hear jaunty little ditties glorifying the horrendous acts committed by Irish republicans during those Troubles than I would listen to loyalist songs hailing the brave lads who murdered members of the Miami Showband or carried out slaughter in Dublin and Greysteel.

Fortunatelyl, The Croppy Boy dates from the 1798 rising and such a long passage of time offers a great cure for potentially guilty minds.

As for the song, it is a familiar enough tale of the young patriotic warrior - or would-be warrior - captured and condemned, then disowned by loved ones as he faces the scaffold. 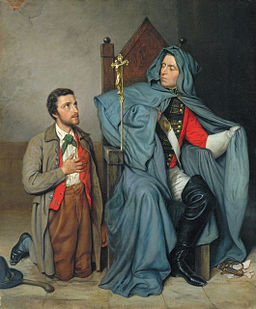 At Wikipedia, it is described thus:

A version by Carroll Malone first appeared in the Irish newspaper The Nation in 1845 and tells of a young man who stops in a church on his way to fight. He sees a cloaked figure in a confessional and kneels for the penitential rite.

The figure is actually a British soldier who sought refuge from rebels by hiding in the confessional.

After the youth completes his confession, the soldier reveals himself and proceeds to arrest the youth and take him to prison and execution.

The legend is the subject of Canadian artist Charlotte Schreiber's painting The Croppy Boy (The Confession of an Irish Patriot), now in the National Gallery of Canada.

Better songs have come from the ancient animosity between Ireland and Britain.

In recent times, thoughtful writers including Paul Brady and Tommy Sands have eloquently questioned the evil, casual taking of life and Christy Moore, despite his past republican leanings, has contributed even-handed and dignified works (he once offered to co-write, with me, a song about a Catholic farmer from border country who was murdered as an informer - I refuse to use the verb executed - after a kangaroo IRA trial).

Come to that, much better songs have been recorded by both the Dubliners and the Irish  singer Anne Byrne (from Dun Laoghaire not Belfast as I mistakenly believed - see Comment).

But The Croppy Boy has poignant lyrics and was put to a pleasant air.

The Dubliners perform it with compelling melancholy, Ronnie Drew taking the lead vocals; Byrne is an outstanding singer and gives the song the haunting quality it perhaps demands. Not an easy choice, but the Dubliners edge it for me.

Others may turn too the Clancy Brothers or others among many interpretations.

And now, where's that menu for The Croppy Bay caff and if they haven't a drinks licence, can you take your own?

Haven't heard this before, but it struck me that the melody is similar to that of Bob Dylan's Dream (on the Freewheelin Album). I've read that Dylan borrowed that melody from an old English folk song "Lady Franklin's Lament", but it's very similar to The Croppy Boy.

Both use the same Irish traditional air, Mick, and also appear to have come to light as songs (as opposed to broadsheets) around the same time, mid 19th century.

I find it impossible to choose between these two versions – so totally different that it’s a bit like trying to compare apples with pears!

Anne Byrne sings it beautifully and her interpretation is undeniably emotive; on the other hand, Ronnie Drew’s voice alone makes his rendition of this song (and of most songs) incomparably unique.

I agree, and this is a key feature of the Cover Story series. I said a few instalments back that it was not a contest. Of course we have preferences but the main objective, apart from the usual one of trying to attract readers to http://salutlive.com, is to alert people to music they may not otherwise have encountered - or remind them of past pleasures.

Hi There - Just to clarify, Anne Byrne was a native of Dun laoghaire, south County Dublin (not Belfast). She grew up only a few streets away from Ronnie Drew and knew him well. Thanks for choosing to highlight her version of this beautiful song.

Thanks Jay. I cannot recall why I thought Belfast but will correct it

Should have mentioned that the cafe’s name changed in no time. It became The Horseshoe