Cover Story: (26) Joan of Arc. Leonard Cohen with or without Jennifer Warnes

Joan of Arc, the Maid of Orleans. Is this the song, maybe one among many, that confounds my electronic (and previously slow-mail) friend Leon Rosselson, a master songsmith, and his stern view of Leonard Cohen? Read the linked piece at your leisure but the key extract is this: "The range of [Cohen's] subject matter is remarkably small. In fact, his interests as expressed in his songs can be narrowed down to one: himself. He had no imagination. He was incapable of making up stories, of inventing characters which are the warp and weft of song."

Rosselson's case against Cohen may or may not be coloured by a sharply differing outlook on the Israel-Palestine conflict. His broader point is that poetry makes for poor music; he suggests Cohen viewed songwriting as a lesser art, to the extent of making do with half-rhymes and line endings that don't rhyme at all ...

On the day I read news of Leonard Cohen's death, I perched on a high stool in a music shop in Ealing, west London, picking out the notes of That's No Way So Say Goodbye on a Yamaha guitar which I then bought.

I like the song while acknowledging the fairness of Leon Rosselson's criticism of what he calls its "nonsensical similes" ("Your hair upon the pillow/Like a sleepy golden storm"). But there are plenty of other examples of Cohen's work, too many to list here, that I would say also answer Rosselson's complaint.

Which leads me to my Cohen song of choice.

Joan of Arc, rightly a heroine of French history and wrongly treated by France's odious Front National as its own property, was burned at the stake on May 30 1431, not by the wicked English but at the behest of the wicked English after a trial that was a mockery of justice even by 15th century standards.

A friend, Fiona Barton, a former colleague and now a successful author (The Widow is a gripping, well-written thriller) , tells an amusing story from her time working during a languages degree course as a helper at a French children's summer camp.

Colleagues made her stand up in front of all the young campers to apologise, in their language naturellement, for her countrymen having fait crémer Jeanne d'Arc. I am sure her efforts to undo harm done in the 100 Years' War (actually it was 116 but that figure isn't quite as eye-catching) worked wonders for Anglo-French relations.

She said, "I'm tired of the war, I want the kind of work I had before

... as well as what Rosselson might describe as sloppy rhyming, heart with Arc, dress with guests.

It works for me. And if I had heard it sung only by Cohen alone, I might be satisfied with the essentially solo performance on his third album, dating from 1971.

But since hearing the Famous Blue Raincoat tribute album by Jennifer Warnes when it was released in 1987, I have had time only for the duet. Warnes, who was among Cohen's closest friends and performed with him on tour from the 1970s, is an accomplished singer and delivers the lines attributed to Joan with firmness and clarity, adding genuine vocal beauty to Cohen's gruff monotone.

I turned for authoritative help to the Cohencentric: Leonard Cohen Considered website. There, Allan Showalter, a "devotedly irreverent" Cohen fan in Durham, North Carolina, writing as DrHGuy, considers the use of female voices for the purpose of "cushioning the imperfections" - a splendid phrase, though Showalter quotes it so may not be its originator - of the writer's own voice.

Showalter refers to rigorous research by Tom Sakic ("ie listening to a staggering number of Leonard Cohen bootlegs") that revealed the first such “featured female vocalist” to have predated Warnes.

He summarises Sakic's findings: "During the 1976 tour, backup singers Laura Branigan and Cheryl Barnes sang the Joan of Arc lines together, a role that in later years would be assigned to a single vocalist. Moreover, Sharon Robinson and Anjani Thomas, who were the sole backup singers in 1980 and 1985, respectively, and who were not listed in the original post, also sang the female part of the Joan of Arc duet."

Many diehard Cohen admirers may prefer to hear their man undiluted by female company. As a more of a Cohen dilettante, I am left musing that comparison of the two versions - without, for now, extending my own listening to Brannigan and the others - confirms my admittedly narrow-minded view that a long Cohen concert would perhaps not have been for me. 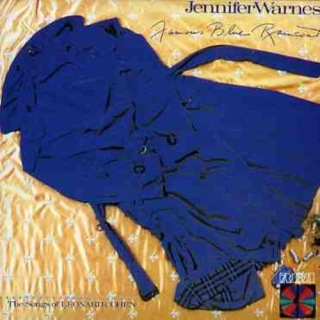 Leonard Cohen: Songs of Love and Hate can be bought here and contains both the song under brief discussion and Famous Blue Raincoat. Joan of Arc's chorus does have faint female accompaniment (Corlynn Hanney and Susan Mussmano, maybe) but this is unmistakeably Cohen solo, And don't worry: the commission I earn from Amazon if you do make purchases using my links will not make me wealthy.

Who said lyrics/poetry had to be "sensical"? Your hair upon the pillow/Like a sleepy golden storm is a great line!

Great piece. Think Cohen was the first to admit his vocals could be a bit much on their own

While I've been a fan of LC since the 60s, I prefer his later work with the big backings and other voices. His last series of concerts - I was privileged to go to three - were joyous affairs, the man himself bopping, getting down on his knees (and back up again, at almost 80!) and the backing singers sashaying alongside.

That’s no way to say goodbye has always been my favourite of his since the 60s and there’s nothing wrong with the lyrics. As Jake says, Sleepy golden storm is a great line and works regardless of whether you label it a simile or not.

It’s true that song lyrics and poetry aren’t the same thing, but that’s the point of calling one a song and one a poem. If you want a good example of rubbish poetry being turned into a good song, consider what Elton John has always done with the crap presented to him by Bernie Taupin.

I think it is clear enough from the posting that I do not side with Rosselson on this (though I see his point on the line Jake and Mick admire). But it's an interesting discussion on more than one level, for example Sue and Phil agreeing with me that the Cohen vocals sometimes cried out for help, as in the form of Warnes.

His vocals are often poor, in an absolute sense. Being generous, you could call them "idiosyncratic"; and I say the same about Bob Dylan. But I accept that, if I like the song. The Joan of Arc song is good with Jennifer Waynes, and almost excruciating with LC on his own. Same goes for Famous Blue Raincoat from the same album.

I really like loads of his stuff from across his career. But there's a certain effect he generates on some songs which I have always characterised as "music to slit your wrists by".

"They sentenced me to twenty years of boredom
For trying to change the system from within
I'm coming now, I'm coming to reward them
First we take Manhattan, then we take Berlin..."
It takes a lot of chutzpah to rhyme "boredom" and "reward them" but First We Take Manhattan is is a great song and the mark of a great lyricist. I like Cohen's version better than Jennifer Warnes' but with Joan of Arc, as Mick says, Cohen's rendition is excruciating.
Let us also consider Closing Time - Cohen both at his performing and writing best. A wonderful song with some wonderful lines:
"I missed you since the place got wrecked
By the winds of change and the weeds of sex
looks like freedom but it feels like death
it's something in between, I guess ..."
Genius or facile? Something in between, I guess.

I just listen to Cohen's recordings and enjoy them! I'm certainly not qualified to dissect the reasoning or objectively criticise the voices employed, like the other, distinguished and learned, commentators. What I have gleaned and what I can say about his work is that it seems that he was preoccupied with sex (and not the only one!) and that listening to so many of his performances made/makes me cry. Of all the men I never met, I think that his work has inspired me to love him all the more. I'm so sad that I never had the opportunity to attend a live concert, something that my son accomplished in my stead at Glastonbury.
Leonard Cohen, greatly missed!