Home Archives Profile Subscribe
Cover Story: (24) The Bells of Rhymney by John Denver. A welcome discovery
Dipping into the Past: the Irish Troubles and music 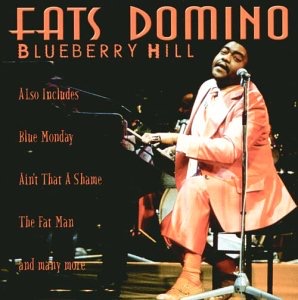 It is another of those off-piste moments for Salut! Live and the Cover Story series comparing the same song, different versions.

First of all, join me in saluting the memory and achievements of Fats Domino, who has just died aged 89. He was one of the artists whose work I most enjoyed when I started listening to music, and Blueberry Hill was among the first records I bought back then. It may still be in the loft along with greatest hits LPs by the Everly Brothers and the Shadows.

That would have been at the very start of my American pop phase - Del Shannon, Crystals, Ronettes, Chiffons, even - briefly .. honest - Patsy Cline, Skeeter Davis and Jim Reeves - just before the Mersey Beat phenomenon and, later, the blues and folk music. Oddly enough, Domino's Blueberry Hill was released in 1956 - when I was only eight - so I can only think it had some renewed airtime and interest in the early 1960s.

So that was the second mistake in your life...

The other mistake Bob refers to was, of course, making Sunderland AFC my lifelong footballing passion. Of which, mercifully, no more here.

There really is no contest when it comes to Blueberry Hill (unless you know of a contender). It has to be Fats.

But I offer a version by way of comparison from a duo formed by two of the best-known products of French and Canadian music respectively, Johnny Hallyday and Celine Dion.

Hallyday is France's Elvis. I enjoy some of his songs, recognise a strong voice and wish him well in his struggle to overcome cancer.

I once had a builder doing a job for me in France who'd play his music non-stop as he worked and that was certainly a test of my appreciation.

But I was delighted when the decidedly left-wing British singer-songwriter Robb Johnson wrote a terrific series for these pages on a singer whose work he, occasionally to his own surprise, adored. Catch the first of a three-part series (there are links to the other instalments) at http://www.salutlive.com/2007/07/robb-johnson-my.html.

Celine Dion's singing is always impressive, outstanding even, if some of her song choices leave me cold. I recall my old pal Rudy, the animator at a karaoke bar in Le Lavandou, saying he lost the will to live once the fifth female wannabe singer on the same night had chosen Pour que tu m'aimes encore or My Heart Will Go On as her song.

I also remember my French wife, her sister and sister's husband laughing out loud at Dion's French-Canadian accent when interviewed on French TV. It naturally sounded fine to me.

But that has nothing to do with this comparison. Hallyday and Dion don't do too much wrong on the live version
I reproduce here. Without the slightest attempt to be mawkish because the man has just died, Fats Domino is streets ahead. For me, Domino dominance begins with his own boogie-woogie piano introduction.

And I did not know until now that Domino was christened Antoine and was of French Creole descent. Nor, until I read the New York Times obituary, that he described himself as being as wide as he was tall ("rotund and standing 5 feet 5 inches"). Still less that Presley once responded to a reporter's reference to him being the king of rock and roll by pointing to Domino (also in the room) and saying: “There’s the real king of rock ’n’ roll.”

There is also an earlier version of Blueberry Hill by Louis Armstrong. I had a lot of time for Satchmo but find it too slow (that said, I left the YouTube stream running and thoroughly enjoyed all the tracks that followed).

Thanks for the music, Fats Domino, and especially for this interpretation.

* Please use the Salut! Live Amazon link to buy Fats Domino's Blueberry Hill - and whatever else takes your fancy while there (it won't make me rich but every little helps keep the site afloat) at https://www.amazon.co.uk/exec/obidos/ASIN/B00008LNYR/salusund-21

Colin...It always seemed to me that aside from Plastic Bertrand's "Ca plan pour moi" (whoever sang it ) , the French don't do Rock or Rock and Roll . I don't share the esteem in which you hold Ms. Dion . I find her a virus on the music world . To me , she wrestles each song into submission rather than serving the song ...she encourages the bad trend on the "Idol" or "Talent " shows of more being more . .That is , cram in as many runs as possible or... why bend 5 notes when you can bend 20 ( not here in your clip where they are pushing a faux country vibe ). The antithesis of a "Tasty" singer who know when to lay on and when to stop like Aretha , Mavis Staples , Norah Jones or Amy Winehouse . In her between song introductions , Celine seems more interested in Celine than any one . By the way Patsy Cline and Jim Reeves should not be guilty pleasures , just pleasures .
There are of course many versions of Blueberry Hill....A pretty bad version by The Dave Clark Five . An odd version by the Walker Brothers . I vote as best after the Fats version the original version . It was recorded in 1940 by Gene Autry . Always liked Autry's voice . It sounds homey and genuine. I always thought my favorite guitarist the late Doc Watson had a similar voice . See : https://secondhandsongs.com/performance/27064/versions ..
My runner up (that is 3rd to Fats ) is Jerry Lee Lewis' version see:
https://secondhandsongs.com/performance/84150/versions
Condolences to Sunderland fans
R.I.P. to Antoine Dominique Domino . He persevered after being missing and presumed lost for days after Hurricane Katrina .

Stan: I doubt many of Celine's fans would see my praise as much more than faint. As for French music, you are broadly right but Indochine's album 13, newly released but a compilation, appeals to me even if they seem to recycle the same tune a little too enthusiastically. Not really rock but what I discuss here - http://www.salutlive.com/2017/10/french-music-doesnt-travel-try-jain-imany-cats-on-trees-and-even-indochine.html - has great merit.

And isn't it time you contributed a piece to Cover Story. It would be most welcome.