Live at the Gecko, with apologies to Ralph McTell and the Animals 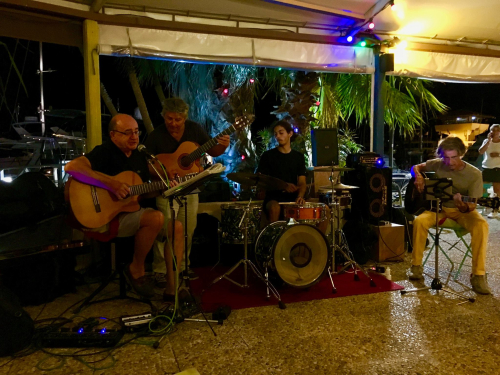 London has Ain't Nothing But ..., an unmissable, jam-packed blues bar tucked behind the Hamleys toy store in the West End. And in Le Lavandou, there's Gecko where, night after night in the summer and at odd times earlier and later in the season, good musicians entertain a broad mix of holidaymakers, boat people and locals from teenagers to retraités.

And now, false modesty avoided and the adjective "good" deleted, you can add me to the roster of performers.

Call it a challenge. It was something I had been hoping to do since buying my first new guitar in more than 30 years, by chance on the day we awoke to news of Leonard Cohen's death. Having neglected my own musical exploits for so long, I could hardly complain at the swift realisation that I could play only part of the repertoire I had back in the 1980s and before. 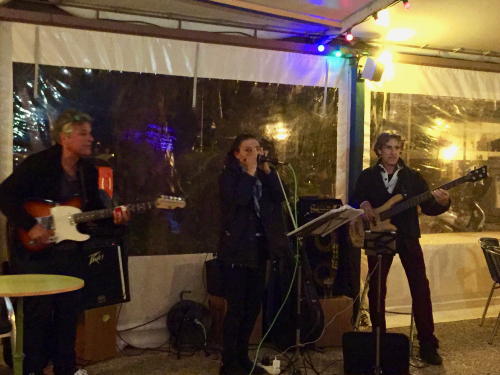 But with the encouragement of members of New Deal, who play the Gecko at least once a week, and in particular Evelyne and Corinne, the wives of two members, René and Jean-Louis (coincidentally our neighbours), and of course the ever-indulgent Mme Salut, I put in a little practice.

My moment came a few nights ago. The guitar had rested in its case for two hours or more; there were excellent sets from New Deal, augmented by a superb young drummer, Mehdi, but minus Georges on the keyboards and their regular collaboratrice Cécille (accomplished vocals and harmonica; present but silent - probably contemplating my campaign to get her to learn Who Knows Where the Time Goes?). I suspected that having heard my strained attempts at Don't Think Twice, It's All Right over drinks at our house a few weeks earlier, Jean-Louis and René had wisely decided against exposing the crowd to cruel and unusual punishment.

Then, without prior warning, the midnight hour coincided with a call to the makeshift stage.

There was no time for nerves. Having frequently noticed that French audiences warm to artists who make an effort to speak their language, I briefly introduced Streets of London, not Ralph McTell's finest song but the one he will forever be associated with and - or so I believed - well within my comfort zone.

It started wretchedly. Hesitant guitar picking, an unconvincing first verse and then a dreadful bum note at the start of the first chorus.

A few friends who have heard a recording on mobile phone agreed I began shakily. Like me, unless merely being kind, they also felt it got better. By the end, I was reasonably satisfied given my long absence from any kind of public performance that I had avoided a total massacre. All the same, it is emphatically not for public consumption.

Someone in the audience - the unmistakable booming voice belonged to Jean-Charles - called out une autre so I went straight into House of the Rising Sun. This was more familiar territory for the boys and my efforts were boosted by their accompaniment, Jean-Louis in particular adding some terrific licks on guitar. 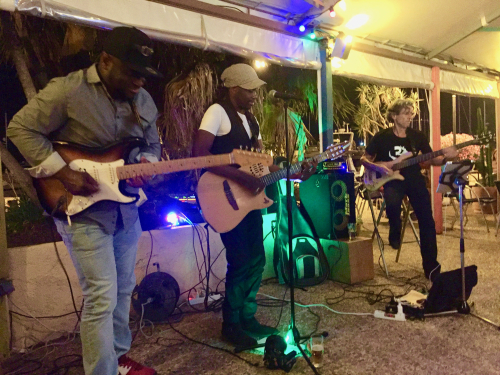 I hope to be invited again and will learn more songs. My remaining repertoire is dominated by folkie pieces that may not suit the Gecko style.

When that might happen is another matter. I return to London this week to bring back eight-year-old Maya, whose love of the music of Cats and Trees, French but singing mostly in English, has been documented here in the past. She has a busy month with us, including early starts for craftwork and summer school, so late Sunday nights are out of the question for now.

But Gecko regulars should not lower their guard. I will be back ... 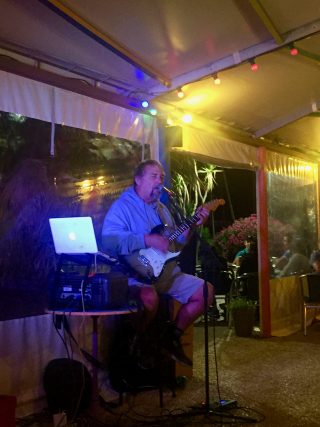 * The photographs all look better if you click on he image: 1) shows me singing House of the Rising Sun with New Deal; 2) New Deal from a previous night at the Gecko; 3) Cherif and Philippe, Paris-based Senegalese brothers with blues, reggae and lots more and 4) Dave le British, a Mancunian who lives in Le Lavandou and plays the Gecko regularly

An amazingly brave thing to do. And, no, I wasn't just being kind when I said you went from strength to strength with "Streets." It augurs well for your future at Gecko. I'm looking forward to video...

Well done Colin. I recall the terror of my first open mic well. However I have since realised that mistakes often go unnoticed and indeed can often help the audience to warm to you. Have a look at Bruce Springsteen on YouTube trying to establish the correct key for You Never Can Tell in front of a packed arena to see what I mean.