Cover Story: (13) The Night They Drove Old Dixie Down. Baez or The Band

JANUARY 2019 UPDATE: welcome to the many people straying here from the United States to read this item. Hope you find it interesting and feel encouraged to explore the site's archive. I cannot be sure what is driving this sudden interest - a tweet or a forum discussion? - and would welcome comments

Mick Goulding responded quickly to an invitation to contribute to the series. Mick, like me (and another contributor, Bill Taylor), happens to support Sunderland AFC and writes occasionally for Salut! Sunderland. He classes himself as less of a folkie than either of us but enjoys much from the genre and was encouraged to write by Bill's comparison of his own favourite Bruce Springsteen's Racing in the Street and the way Serena Ryder later interpreted it. Here, he discusses in fascinating detail the respective merits of The Band's original version of The Night They Drove Old Dixie Down and Joan Baez's controversial but highly successful cover ...

I can't now remember which version of this song I heard first. I always knew it was originally by The Band, a group I admired in the late 60s, recorded on their eponymous second album in 1969. But I didn't own that album, and it may have been hearing the Joan Baez release, in 1971, which made me go and listen to the original.

Both versions subsequently entered my record collection. I'm not qualified to say whether it's “folk” or not, but these days it would probably come under the wider genre of “Americana”.

The Band never quite achieved the universal popularity they probably deserved, despite their work with Bob Dylan – touring as his backing band, and recording a load of songs with him in the basement of The Band's communal house “Big Pink” which were later to appear as the much-bootlegged Basement Tapes.

They were known more (perhaps only, by many people) for their absolute classic song The Weight, from their debut album Music From Big Pink. The Night They Drove Old Dixie Down remained a much lesser known album track for a couple of years.

And so it was Joan Baez's recording, in 1971, which made the song really popular - becoming a chart hit on both sides of the Atlantic. The lyrics of the song, sung from the perspective of a poor working Southerner caught up in the American Civil War, make it sound like it could have been contemporaneous with the civil war itself. And its adoption by Joan Baez, famous for her renditions and interpretations of traditional folk songs, could have added to that impression - had anyone not known it was written by Canadian Robbie Robertson (The Band's primary songwriter) only two years earlier.

It's clear to me why the Baez version was always more likely to be a popular hit. Aside from her incredible voice, it bounces along, accentuating the song's catchy melody, and maintaining that rhythm through the chorus - complete with choir – to create a singalong atmosphere. The Band's version stalls somewhat at the chorus, with the insertion of an unexpectedly timed drum roll.

For me, the point of any cover version should be to re-interpret the song, or present it in a different way (no matter how slight); to bring out something in the original that you feel wasn't accentuated enough. Otherwise it's just karaoke - and there'd be no need to listen to anything but the original. Baez succeeds here.

But those who've never heard the original, or taken much notice of the lyrics, may be surprised to hear that Joan actually changed some of the words.

That's often not a big deal, occurring perhaps for the sake of a different phrasing or timing. But in an interview for Rolling Stone, she said that she'd never seen the printed lyrics, and relied on her own understanding and memory of the original.

So she mistakenly sang what were actually misheard lyrics. We all do that - singing along to the radio and saying what we think we hear. Peter Kay has even made a comedy routine out of it! But it struck me as an odd thing for a serious and respected performer to do to a song she liked by a contemporary and admired artist.

I've also read that this apparently incurred the displeasure of The Band's vocalist, Levon Helm (who also claimed unattributed co-writing credit). Apparently he stopped performing the song, because of his dislike for Joan's version.

Virgil Caine is my name and I drove on the Danville train Til so much cavalry came, and tore up the tracks again.

The original says that Virgil "served" on the Danville train, until "Stoneman's cavalry came" - General Stoneman being an actual Union army officer who tore up the tracks near Danville (Virginia) of the railway that was the main supply route for the Confederate army.

In the winter of 65, we were hungry, just barely alive

I took the train to Richmond that fell, it was a time I remember oh so well.

The original second line of this was "By May the Tenth, Richmond had fell, it was a time....."

The definite article here suggests that THE Robert E Lee is the name of a train passing by. In the original there's no article, and it's actually Robert E Lee himself (leader of the Confederate army) going by, which is more worthy of note, and more reason to drag Virgil away from chopping wood!

There are other slight, but less significant, differences - but you get the picture. Despite this, however, it's still very difficult to say which I prefer. There's certainly more emotion in The Band's version, and Helm's vocal (a southerner himself, from Arkansas) delivers the right kind of pained authenticity for the subject. But the arrangement of the Baez version produces a more rounded, musically satisfying song.

On a family holiday in USA, driving into Dixie through Virginia, I played the Baez version in the car and my teenage kids, who'd never heard it before, liked it so much they requested it again. So – despite being a traditionalist who invariably prefers an original - that probably tips the balance for me. 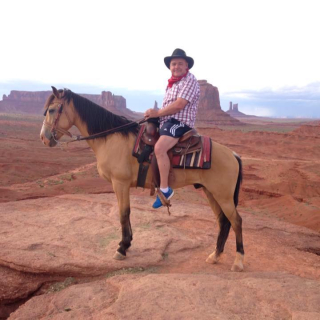 * Mick on his 2015 USA holiday. See all items in the Cover Story series at this link or look to the right and.or scroll down until you see each article listed. The versions he compares can be bought from Salut! Live Amazon links: this for Baez and this for The Band.

No question in my mind. Baez's version is just a song - pretty, tuneful, la-la-la, move on. The Band makes it almost a historical document; absolutely a folk song. Listen to their live version from "The Last Waltz" with an added brass section. It's spine-tinglingly good.
https://www.youtube.com/watch?v=eOi0tC00Luc

It just occurred to me that, in singing "there goes THE Robert E. Lee," Baez may have been getting confused with the riverboat that was nicknamed "Monarch of the Mississippi" and features in a song by Al Jolson (and Dean Martin, among others) with the chorus: "It's simply great, mate, waiting on the levee, waiting for the Robert E. Lee."
Hard to imagine that Virgil Caine and his family were commuting between Virginia and the Mississippi which, at its closest point as it flows between Missouri and Kentucky, still isn't very close. Anyway, the riverboat Robert E. Lee wasn't built until 1866, the year after the Civil War ended.