Vin Garbutt, of whom the English Folk Song and Dance Society once said that he should be prescribed on the National Health, [has] died.

Usually identified as a folk singer, winner of the BBC Best Live Act award in 2001, he was in truth a brilliant all-round entertainer and a hugely funny man.

Teesside University gave him an honorary degree. That’s the lad, gowned and mortared, below. 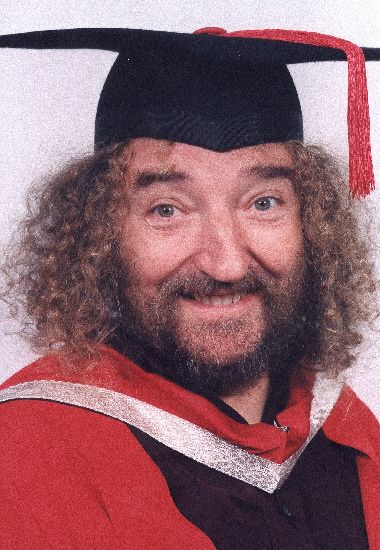 He was born in South Bank, his father a sergeant major and his mother an Irish Catholic. “Until things got a bit greener, I always thought that a catalytic converter was an Irish missionary,” he liked to say.

His hair resembled Samson’s before that unfortunate business with Dalilah, his jumpers could have been bequeathed by the late Bobby Thompson, his crack was a cross between the Little Waster and the Big Yin.

I’d last chatted to him at Darlington Folk Club just before Christmas, when he was clearly unwell. “Anyone got a defibrillator?” he asked the audience, and it was audiences which reinvigorated him. “It’s the adrenaline, performing is fantastic,” he said.

He’d had heart problems for years, told the Darlington crowd of an appointment with his consultant at the James Cook Hospital in Middlesbrough.

He’d been told that a diseased valve would be replaced by the equivalent bit of a pig, was finally given a mechanical replacement when major surgery was carried out in April. “The pig might have been disgruntled,” he wrote on his Facebook page.

Vin wrote almost all his own songs. At Darlington they begged him to do the one – a true story – about a ship which, 20-or-so years earlier had run aground off the East Cleveland coast, where he lived. Inevitably it was looted, the cargo chiefly leisure shirts and boys pants with a Super Mario motif.

That he performed a great deal better than he looked recalls also the death in 1997 of Denis Weatherley, my old headmaster at Bishop Auckland Grammar School and himself a singer of international renown.

In later life we became friends. A few months before he died I bumped into him in Darlington, noted that he seemed pretty gaunt and remarked – as you do – how well he looked.

“Mike, there are three ages of man,” said Denis. “Youth, middle age and ‘By God you do look well’.”

He died a few months later while performing Swing Low Sweet Chariot with his son’s choir. They’d just reached the chorus about coming for to carry me home.

It was a poignant but perhaps a perfect way to go – and it was a reminder of another of those Latin maxims about which we’ve been writing. Carpe diem: seize the day.

* Vin Garbutt RIP: If the River Tees Could Sing, Vin Was Its Voice

I knew Vin for at least the last 45 years, a brilliant musician and entertainer but most of all a great friend, he will never be forgotten and missed by many.
R.I.P. Vin

The title doesn't ring a bell, but the song might once I look it up. Thanks, Alan