Vin Garbutt RIP: if the river Tees could sing, he would be its voice

As we grow older, news of contemporaries dying becomes depressingly routine. Some deaths hit harder than most, however, and it is with immense sadness that I record the passing of a man I regard as probably the best solo performer on the British folk circuit, Vin Garbutt.

Vin was a charming, funny, self-deprecating man but also a quite wonderful artist who could draw an audience into the palm of his hand with that roaring voice, exemplary stage presence and down-to-earth wit.

A Boro lad through and through (despite his across-the-divide Orange and Green Irish parentage), he'd worked at ICI. The voice, it always seemed to me, could have come from nowhere else and I once wrote that if the river Tees could sing, it would sound like him.

The newspaper of his home town Middlesbrough, the Evening Gazette, reported his death a few weeks after major heart surgery and at the age of 69, with these words:

A post on Facebook read: 'It’s with great sadness and extremely heavy hearts that we must inform you that our beloved Vin passed away this morning. 'He loved the life he shared with you all, and we know how much he’ll be missed. 'Although we won’t be able to see him again, we’re grateful that we will be able to listen to him for the rest of our lives. 'All the very best, Pat, Emma, Tim, Katie & Louis.'

The world has just lost one of it's finest, gentlest and most wonderful men. My folk 'dad' Vin Garbutt. Thank you... https://t.co/b7GW7tZN41

From earliest recollection, he would charge a fiver or so, including petrol and refreshments, to drive over from Teesside to folk clubs I helped to run in Bishop Auckland and Darlington. Even with the passage of time, that can be seen as selling himself short.

I saw him sing to my own folk club faithful (and at other clubs), to a bunch of night club revellers including off-duty cops and to a hugely appreciative crowd in Downpatrick, Northern Ireland, where I overheard a bloke in the toilet marvelling at the power of his vocals.

Vin outraged the mostly southern English folk police by not only opposing abortion but writing songs embracing his strongly held belief. I wrote at length about the deep suspicion that he was excluded from the Cambridge Folk Festival programme for this reason. I disagreed with his point of view but never thought for a second that he should be forbidden from, or punished for, expressing it.

The only time we fell out, and then only mildly, was when I described his outlook in a Daily Telegraph review as "self-opinionated". He was right to challenge the usage, since it excludes the validity of alternative opinions, and I told him so. It was a misuse of a word, when "opinionated" was the appropriate term. In classic Vin fashion, he accepted my apology.

Vin's humour remained with him even as he approached serious heart surgery earlier this year, as the Evening Gazette reported.

On the planned removal of his mitral valve and the insertion of a mechanical replacement, he said: "I could have had a pig’s valve but that would have left the donor disgruntled so I rejected it.”

My abiding memory of Vin will not be the abortion row, the lusty voice, the jaunty tin whistle or even the superb banter he maintained with audiences. It will be of the sight of a supremely gifted singer sipping his pint of Guinness between songs and tunes, raising his glass to the audience and saying, simply: "Cheers."

The adorable French singer Flossie Malavialle, who has lived in the North East for some years and knew Vin, has rotten family health problems of her own but took time to add these warm words at her Facebook page:

I had an amazing time at the Black Door Folk Club in Brussels last night. The place was packed and the atmosphere brilliant. Thank you so much to Anne Robertson for booking me and generally looking after me for the last couple of days ... I'm sorry to announce that I've had to cancel my gig at Swainby Village Hall this coming Friday. My dad's health has deteriorated and I'll be flying home tomorrow morning for the foreseeable. I'm thinking about Vin Garbutt and his family a lot, Vin had played the Folk Club in Brussels twice over the years (one recently) and the organisers paid him tribute last night by playing his songs as people were coming in and telling a few stories about him too.

I'm gutted that I won't be able to attend his funeral on Friday as he had been such a support and good friend over the years but as my good friend Joan Edmundson said to me last night, "Vin would have wanted you to be with your dad at this time." I know it's true because he valued family so much so that's made me feel a bit better. Still all my thoughts with be with you on Friday. I know for certain that cathedral won't be big enough.

And Kate Rusby, one of Salut! Live's great friends, added this poignant tribute:

So very sad to hear the wonderful Vin Garbutt passed away. What a humble, gentle, talented, hilarious human being. Those of you who didn't see him perform, you missed a proper gem. Here we are with our matching hair, Broadstairs festival 2015. My love to Pat and family. True legend. ❤️Xxxx

Ditto Flossie re non-attendance at Vin's funeral. And ditto, Kate.

And cheers, Vin, for your wonderful music and long-distance friendship. And heartfelt condolences to Pat and the rest of the family. And the next time I order a Guinness - albeit from an export bottle since I am now in France - I shall raise it in your honour.

* Treasures rediscovered; Vin Garbutt and The Valley of Tees

* a moving thread at the Mudcat Cafe forum

* And thanks to Bill Taylor for digging out the clip you see above ... 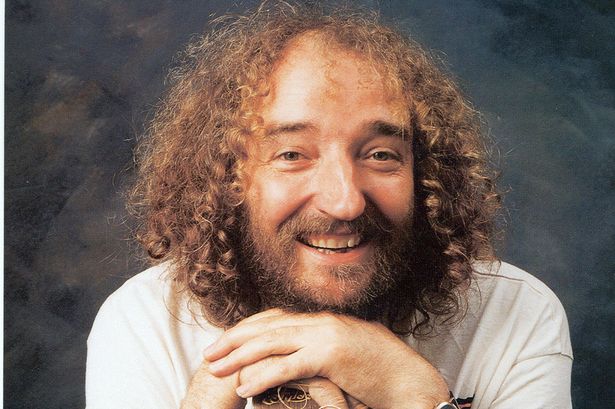 Vin's family has announced at Facebook , from where this photograph is taken, that the funeral will be at Middlesbrough Cathedral, Coulby Newham, on Friday at noon, adding: "Anyone whose life has been touched by Vin either through his music, his friendship or his family is invited ... all of you who wish to pay your respects are welcome to join us at the cathedral on Friday. We would like to celebrate his life the way he lived it, with open arms. "Following the service Vin will be laid to rest at Eston Cemetery , then a wake to celebrate his life."

Very sad. He was a very distinctive voice and will be missed.

So sad to hear this. I remember him well from when, about a million years ago, Colin Randall and I (with Phil Steele and Colin's brother Phil) ran a folk club in Bishop Auckland. We featured Vin Garbutt several times - a very nice, extremely funny man who wrote and sang lovely, quirky songs. Hard to find beauty in industrial Teesside but he did. Plus, he had a bit of a following in Toronto, too. RIP.

(And thanks, Sue Nicholson, for flagging this to me)

Oh no! A genuinely hilarious and brilliant performer! Very sad news. I saw him many times in Sunderland folk clubs, most often in the Ivy House, he was always good value, both musically and comically.

What you see above was not posted directly to Salut! Live but has ben taken from social media, in some cases in response to my own comments ... hope that is OK with all concerned