Song of the Day Revisited: Jez Lowe and the Bad Pennies ... Taking on Men

is the latest up in this series of Song of the Day Revisited, retracing and in some cases remaking steps from the original exercise in 2011. This, more or less, is how I introduced him then:


Jez Lowe is a masterly observer, in words and music, of the highs and lows of everyday life in the North East of England. His work goes far beyond his native region, as his record distribution company once sternly reminded me, and I would have been happy - despite the reservations expressed in one of the reviews below - to select almost any item from his repertoire.

But it is from his many songs inspired by the part of the world where I also grew up that I knew I would draw my choice.

I wondered about the song in which he baffles an Aussie immigration officer, when asked which football team he supported (in expectation of a gloryhunter's response), saying: "Hartlepool United."

But I plumped for Taking on Men which tells, looking back from a new age of bleak post-industrial decline, of Tyneside shipyard workers responding to rumours that one of the companies was recruiting.

And here are extracts from two reviews of Jez Lowe records written by me for The Daily Telegraph when they, too, were taking on men.


In the tradition of Tommy Armstrong, the Victorian pitman's poet whose songs began life as broadsheets that he sold to raise beer money, Jez Lowe has established himself as an entertaining chronicler of the light and shade of daily North-Eastern life.

As the coalfield died, the pick of his songs were as compelling and sympathetic in portraying the impact on a community through music as the film Brassed Off was via the cinema screen. Doolally demonstrates that Lowe has lost none of the creative flourish, or the anger and commitment, seen in his earlier writing.

Regina Inside, a bitter snipe at a royal visit to a pit-strike battleground years after the pit's closure, is a classic rant, with the impressive Kate Bramley doing her utmost to sound surly on lead vocals.

When Lowe widens his search for themes, the results are strikingly mixed. While the anti-war homilies of Bloodstained suffer from clumsy syntax and a jarringly chirpy arrangement, Calico colourfully describes a Californian desert saloon bar encountered by Lowe some years ago, and offers some of the album's best listening.

The routine view of Jez Lowe - that he is an unrivalled observer of north-eastern working-class life - is kind but incomplete. A profoundly impressive new album shows how much broader is the scope of his interests.

Contributions he made to the BBC series, The Radio Ballads, which are included here, deal with universal pictures of shipbuilding, seafaring communities and, on The Miami, the vicious loyalist attack on the Miami Showband in Northern Ireland in 1976.

The North is never far away - Jack Common, the central theme, was a Geordie writer befriended by Orwell - but there are songs, too, inspired by Yeats and Heaney, and by the road, and their quality is consistently high.

Lowe has earned the right to be counted among England's finest contemporary songwriters. 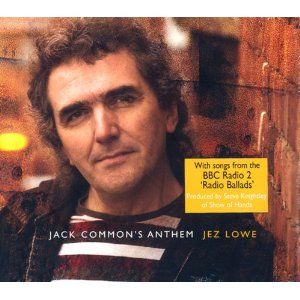 * Jack Common's Anthem, on which the chosen song appears, and other Jez Lowe albums can be bought at favourable prices at the Salut! Live Amazon link.