Song of the Day Revisited: Damien Dempsey ... Schooldays Over

Another choice from Pete Sixsmith, but one he made when the original Song of the Day series appeared, as Damien Dempsey and a tasty slice of Dublin folk. The new Song of the Day Revisited series will now take another weekend off, hoping for the best for Sunderland at Liverpool, and resume on Sunday or Monday ...

Reviewing Damien Dempsey's album Seize the Day, I wrote in 2004: "If Bob Marley had been Irish, he might easily have sounded something like Damien Dempsey." Add more obvious influences - Luke Kelly, Christy Moore - and you begin to explain his striking treatment of this song, presented here by my friend and occasional contributor Pete Sixsmith in the only guest slot of the Song of the Day series ...

And this is what Pete wrote:

Damien Dempsey meets Ewan MacColl in this great version of a great song.

It reeks of times when a boy would leave school at 14 on a Friday night and, 48 hours later, accompany his dad, his brothers, his uncles and his schoolmates down the pit, or into the factory or steelworks.

The ritual has now disappeared. But MacColl knew all about it and was echoing the certainties of his generation. Couple it with My Old Man, the song about his dad being thrown on the scrapheap at 50, and you have a microcosm of the working class experience of the age.

His voice is full of feeling and passion and I particularly love his Dublin pronunciation of "anthracite". He won't have experienced anything like life down a mine but treats MacColl's words as a serious working class document.

It comes from an album called The Rocky Road a collection of traditional, or contemporary but traditional-sounding, songs that Dempsey does very well. The Old Asphalt is another good 'un; he may even have some experience of this given that it was Irishmen who laid the vast majority of our roads. 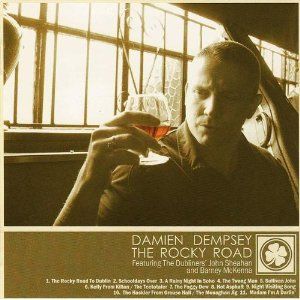 * Lots of Damien Dempsey music is available at the Salut! Live Amazon link. Luke Kelly's version seen below, and which some may prefer, appears on his album Luke's Legacy ...