Song of the Day Revisited: Buffy Sainte-Marie ...My Country 'Tis Of Thy People You're Dying

I shall let this choice from 2011 stand by itself and speak for itself in the new Song of the Day Revisited series ...

Red Indians, as they were called in insulting innocence, formed a part of every childhood of my generation.

They were on our televisions several times a week and in the comics we bought. Always portrayed as primitive baddies up against the noble cowboy goodies. All so much tosh.

Has any singer more powerfully illustrated the plight of what we later grew to know as Native Americans than Buffy Sainte-Marie? She was convincing in almost all she did, but this song stopped me in my tracks.

I thank you for this. I listened while I was 16 and am now 58. I was the top student and got kicked out of History in 1968 for arguing with the teacher over the Native American history I learned through Buffy.

When I came back just a few years ago...since 1968 remember...my teacher saw me at a game. He ran up to me and the first words out of his mouth were "I am sorry Barb. You were right. How did you know?" I didn't even have to ask what he was talking about. Thank you Buffy.

Native Americans may take heed from one other thought: unlike cowboys, they have never been considered synonymous with dodgy builders. 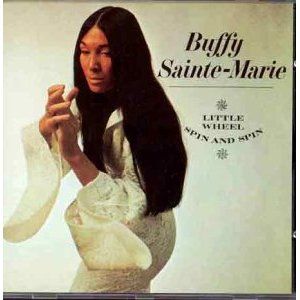 * Little Wheel Spin and Spin, the album on which I first heard Buffy Sainte-Marie sing My Country 'Tis Of Thy People You're Dying can be bought at this Salut! Live Amazon link.

Tags: Buffy Sainte-Marie, folk music, Little Wheel Spin and Spin, My Country 'Tis Of Thy People You're Dying, Song of the Day

In case you are are interested you should be able to listen on BBC iplayer.Her contribution is about 45 minutes into the programme.

Her choice of music has some surprises; less surprising are her comments about her treatment by the US authorities.