Song of the Day Revisited: Altan ... song, tunes and memories of Frankie

There was a time when I had a real friendship with Altan, one that persists with occasional electronic communication but is otherwise dormant. It was more of a professional bond than anything; we'd see one another at concerts or festivals and get on quite well.

The late and hugely missed Frankie Kennedy and I knew which football teams we supported (Everton him, Sunderland me) and we had and debated views on the Troubles and just about everything else (he probably thought my employment by The Daily Telegraph must have been some kind of care-in-the-community experiment). I was devastated by his wretchedly early death.

For the original Song of the Day series, I chose a Gaelic song, Gleanntáin Ghlas' Ghaoth Dobhair, performed exquisitely by Mairead Ni Mhaonaigh (Frankie's wife: I remember calling on her some time after his death at her home near Dublin). For the revival series, I have gone for tunes, from Franke's lifetime: The Monaghan Twig and The High Road To Linton. But I wanted Mairead's vocie to linger and you'll see a second clip - my original choice - below. This is how I introduced my 2011 posting ...

The people who made up Altan were among those I most liked bumping into at concerts and festivals when I was writing regularly on folk music for The Daily Telegraph.

Altan are essentially a Donegal band, but initially with the strong Belfast input of Frankie Kennedy, an inspirational figure, not only for his flute and tin whistle playing but because of the engaging, articulate presentational skills he brought to each performance.

You might meet only two or three times in a year; each encounter would leave the impression you'd been in the company of a good friend and, ill as I knew he was, I was devastated when cancer took him 11 days short of his 39th birthday in 1994.

The photograph you see below is of the lead singer and fiddle player Mairéad Ní Mhaonaigh, who was of course Frankie's wife. The photographer caught me in the mirror's reflection, seated opposite Mairéad when I interviewed her in Donegal, in or near her home patch of Gweedore, in February 1996.

I remember the evening well since one of the band came over to me later and asked: "Did you know there's been a bomb at your offices in London and there's a lot of walking wounded?" Instead of flying home next morning as part of the press trip Virgin Records had organised, I was begging lifts to Stroke City (Derry/Londonderry) to report on the end, as it then was, of the IRA ceasefire; it was from the same city that I had reported its modest beginnings, prompting a cynical colleague to say any subsequent bomb damage should be named Randall Crater.

Happier than bombings, and dark memories of friends departed, is any reacquaintance with the voice of Mairéad and the aching beauty of the music her band* continues to make.

I was disappointed a little while ago, having become one of Mairéad's many Facebook friend, to see they were in the Alps; with slightly more notice, I might have been able to undertake the trek from the Mediterranean to see them ( I can almost hear Frankie saying: "Why not? You'd do it if Sunderland were playing Grenoble!")

The song I chose in 2011 is one of emigration. The tune will be familiar to those who know the song Paddy's Green Shamrock Shore, and I assume it be an old air. These lyrics, which The YouTube contributor bridgetoofar2 helpfully provides translation below, were written by Mairéad's father, Proinsias Ó Maonaigh, also known by the Anglicised version, Francie Mooney.

At YouTube bridgetoofar2 describes it as one of the "most beautiful and meaningful" songs of migration ever written and adds: "Mairéad sings it with great pride and longing, and makes it crystal clear why this is the unofficial anthem of the people of Gweedore."


Farewell to the noble mountains of Donegal
And twice farewell to tall Erigal, arching over rowen and ash tree
When I passed by Dunlewey Lake, lying quietly in the glen
Behind me were the green glens of Gaoth Dobhair, and it nearly broke my heart.

Traveling through Glendowan's Hills, and Muckish behind me
I don't mind saying with sorrow and grief, that tears fell from my eyes
Westward to America was my journey, far across the wide sea
I said farewell for a while to Donegal, and the green glens of Gaoth Dobhair.

I never wanted to leave my own beloved land
But the foreigner's heavy handed deceipt and treachery drove me away
It would be my heart's desire to return again, when I should get a little money
To spend the end of my life with my family, 'round the green glens of Gaoth Dobhair.

Yet farewell, farewell to Donegal County fine and fair
And to your brave men who in time of need, did not ever cower before the foreigner
There's a place in my heart for each man and woman, each child big and small
Who live in peace, without sorrow or grief, in the green glens of Gaoth Dobhair. 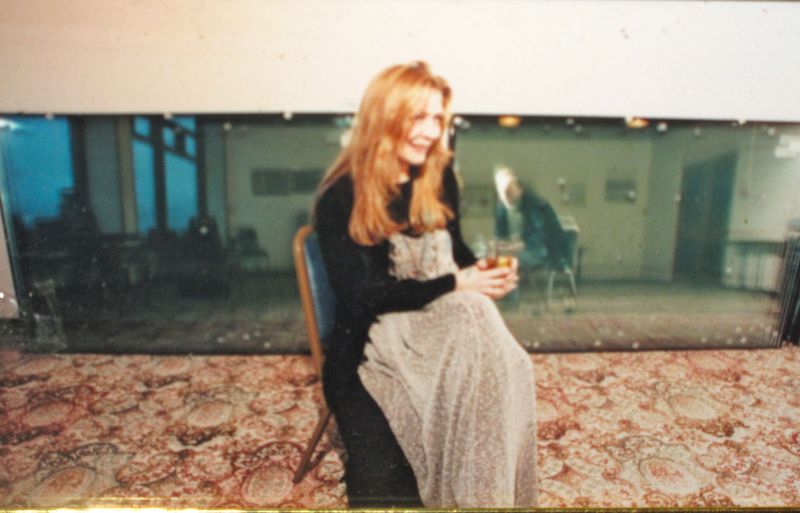 * Altan musicians at the time of the interview at which this photograph was taken were: Ciarán Tourish (fiddle), Ciarán Curran (bouzouki), Dáithí Sproule (guitar) and Dermot Byrne (accordion). The most recent line-up info I have is: Mairéad Ní Mhaonaigh, Ciarán Tourish, Ciarán Curran, Mark Kelly (guitar), Dáithí Sproule and Ciaran's cousin Martin Tourish (accordion). I remember Mark from my meetings with the band so not too much has changed.

Altan are playing at Ireby folk festival in June this year (2012). I will be there, I havn't seen Dermot Byrne for years. He is a very plesant man and a great box player.