Song of the Day Revisited: Sharon Shannon/ Dessie O'Halloran ... Say You Love Me

This is pure fun. And it's the latest instalment in Salut! Live's retro series Song of the Day Revisited. I have always loved Sharon Shannon's wonderful musicianship and spirit of adventure. Let my 2011 words, below and only slightly updated, describe my choice of this song for the original series ...

"I could listen to that girl all night." Those words, or similar, were spoken to me in a Belfast bar in the mid-1990s, and the conversation probably forces itself back into my mind about as often as I dream that I have resumed smoking after decades of abstinence.

Sharon Shannon - look for the seated musician with ear-to-ear smile - is indeed an artist whose accordion and fiddle-playing, and free-thinking choice of material, I could never tire of hearing.

But this is not a Song of the Day about Sharon. I could devote a Tune of the Day series to her work and not run out of material for a month or more. But one of her many gifts is an ability to assemble exceptional musicians, from any genre, in the cause of inventive, magical music. Musical collaboration has become an essential part of the Sharon Shannon story.

And on the occasion captured in this YouTube clip, she hit the artistic jackpot.

Dessie O’Halloran, a native of Inishbofin, a few miles off the coast of Connemara, managed to escape my notice for the first 60 or 65 years of his life (he is now 70 or was when the series ran in 2011).

That is, in itself, no great surprise.

He has a broken, strangled voice that, in all honesty, you'd think only a close relative could love. Except that the close relative has been joined by countless other admirers and the pair of old codgers who write all that appears at Salut! Live are among them.

Say You Love Me, which members of the Mudcat folk forum suggest started life as a bluegrass song, I've Waited As Long As I Can, written by the late Hylo Brown, brought O'Halloran Irish chart succes in 2001.

It may seem odd to follow the purity of Joan Baez - [whose item in this series immediately preceded Sharon and Dessie - Ed] - with the ramshackle vocals on which O'Halloran may well hold some sort of trademark. But for the song and its context, that voice is as near to being the perfect match as you will find outside the pages of Mills & Boon.

"You hear that song and you imagine a wizened old man in an pub somewhere on the west coast of Ireland, sipping his pints of stout, rolling his own fags and occasionally breaking into the session to sing the songs he knows," a friend said.

And I love it. Maybe a whole concert of Dessie's voice would be stretching it a bit far, but I am totally hooked by the song and chorus, voice, mannerisms and the sheer fun value. Look at Sharon and the other musicians. Look at the faces of audience members. Everyone is having a fabulous time, whatever they may make of the closing burst of the Benny Hill Show theme.

Enjoy, or tell me why you didn't. 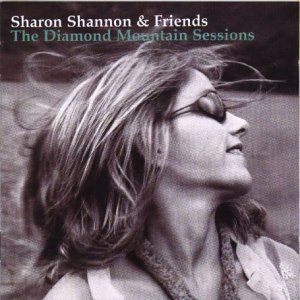 * All music featured at Salut! Live can be bought at the sites Amazon link. http://www.amazon.co.uk/exec/obidos/ASIN/B00004Y259/salusund-21 is were to go for a copy of Diamond Mountain Sessions, one of the albums on which Sharon and Dessie can be heard performing Say You Love Me, and you can navigate from there to find other items you may wish to purchase.