Show of Hands: don't think twice, they're better than all right 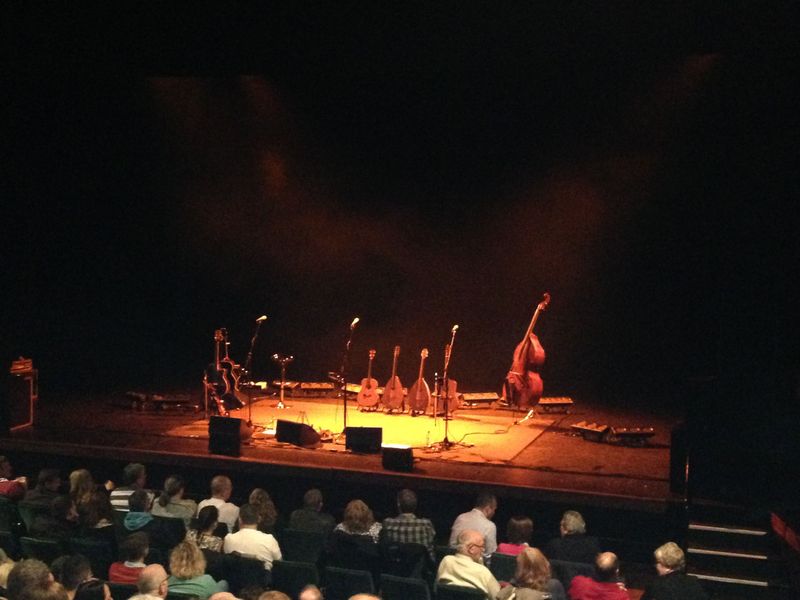 And then there were three

So, the couple who generously allowed us to plonk ourselves down at their table with our drinks before the concert had never heard of Show of Hands.

"Oh we don't live far away and thought we'd come along. Do they sing, as well?"

As well as what? That was how I thought of replying while pondering the question.

Instead, I explained who they were and what sort of music they played - and sang! - and confessed that, as an admirer, I was necessarily putting a shiny gloss on it all. It's like that with folk music.

Steve Knightley understands this perfectly well. He's one third of what was previously a duo but for some time has also included the excellent double bassist Miranda Sykes as well as the multi-instrumentalist Phil Beer. And yes, both also sing.

Steve aimed some early between-songs remarks at anyone in the audience who might have been dragged along with the promise that "they're not too folkie".

I tried a little of that with the couple whose table we shared. And I assured them that they would absolutely love Cousin Jack, the ultimate Show of Hands crowd-pleaser. Except that I didn't put it quite like that; I said that if they didn't like that, they'd probably like nothing.

In fairness, the male half of our new acquaintances finished my sentences with an obvious grasp of West Country industrial history when I started my synopsis of how the song represented the story of Cornishmen driven away in search of work because of the decline of tin-mining on their native patch. I guessed he'd enjoy that, and probably more, and that his jazz-loving partner would appreciate the virtuosity on display.

I spotted them later in the concert hall but only from the back, several rows ahead of us and only in the interval. Cousin Jack had yet to make its appearance. Oddly, since we'll almost certainly never meet again, I'd be disappointed if they did not enjoy the whole experience.

The West Country features a lot in the repertoire, as might be expected since Steve and Phil first met at a folk club in Exmouth, Devon. Songs of land and sea, of death and intrigue, dominate the playlist. Steve is the natural leader, handsome with a strong singing voice and the speaking gifts that ensure every anecdote amuses and informs.

Phil and Miranda had their solo slots and are also strong vocally. But in a warm and varied set, the standout for me was a song harking back to those early folk club days, Steve's interpretation of one of my favourites slices of Dylan, Don't Think Twice It's All Right. I had not heard Show of Hands play this previously but anyone who knows how much I love the song by Joan Baez will realise how good his version was when I say it's not so far behind.

There was no support, just two halves of the trio. My sole disappointment was on their behalf. A bunch of musicians this good, able to book and sell out the Albert Hall on word-of-mouth alone and posting sold-out notices elsewhere on this very tour, should not be playing to a medium-sized theatre only two-thirds or so full.

What a shame that couple didn't bring their street along with them.