Another episode in an occasional series recalling pieces of music that have given much pleasure and suddenly flow back into the mind or are encountered among my thousands of CDs, cassettes and vinyl ...

There is never a need to apologise for turning for Salut! Live material to Sandy Denny, as gifted a singer and songwriter as England has produced in living memory and sorely missed still, fully 36 years after her death at just 31.

But it is perhaps important, in a feature such as this, to avoid the big, familiar tracks we associate her with. There is always a place for them, as any regular reader will know, but that place is not in Treasures rediscovered.

As far as I can tell - and I may be corrected, not leAst by Philip Ward of the superb http://www.sandydenny.blogspot.fr/ site - Sandy had been invited to join Dave Cousins's band, the Strawbs, but was not yet a member, when they teamed up in a Danish studio in 1967 to record 13 songs for an album no one at the time would touch.

Early the next year, according to the articles I have read while lazily researching this item, she did join the Strawbs but soon departed for the first of her memorable stints as the voice of Fairport Convention after Judy Dyble's departure.

That forgotten album was finally released in 1973, capitalising on both Sandy's growing status and a number two hit that year for the Strawbs' Part of the Union.

It was issued with the title Sandy Denny and the Strawbs: All Our Own Work on the Pickwick album.

Anyone who has the album or remembers it will know it contained an early solo version of Sandy's signature song, Who Knows Where the Time Goes?.

But I always think of another track, the jolly, inconsequential little All I Need Is You?, written by Cousins and delivered with Sandy sounding her most English despite a chorus evoking the America's west coast and the Mamas and Papas. I love it and was delighted to come across it again a day or two ago.

The second verse has always fascinated me:

Cats have got eyes that seem to follow me where I go Purple and green, they seem to know everything I know Read all the feelings that I just didn't want to show

If I think of my younger, football-playing daughter, Nathalie, when I hear You'll Never Walk Alone (she disloyally supports Liverpool), her sister Christelle is the cats one to the extent of having two of her own and, I have no doubt, identifying with the sentiments expressed in that lyric. 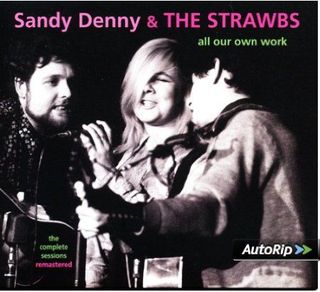 Buy it, if you share my enjoyment and want more, at Salut! Live's Amazon link: http://www.amazon.co.uk/exec/obidos/ASIN/B003G44V9I/salusund-21. The usual range of knockdown prices.

You overestimate me, Colin! I have a short chapter about this album in my Sandy book but never got to the bottom of the confused chronology. Help may come from Dave Cousins’s autobiography due out in September or – more likely – Mick Houghton’s Sandy biography to be published next year. I’m not sure if she was ever a fully paid-up member of the group. If so, it must have been a short stint. They were usually billed as ‘Sandy Denny and The Strawbs’. The association began in 1966 and must have ended soon after the Copenhagen residency, because Sandy talked in a later interview about a gap of ‘nine months or a year’ between her leaving the Strawbs and joining ‘the Fairport’ (which we know was May ’68). Anyway, it’s a charming little record, more time-bound than most of her work. I always enjoy ‘On My Way’ and ‘Sail Away To The Sea’.