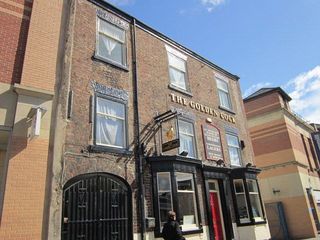 Trish O’Brien is a member of the Cork-Kerry-Darlington Sheehan family, close friends for an unmentionably long period of my life. After a globetrotting existence following her husband John, a ship's master who has performed a variety of seagoing functions, she settled in Scotland.

The Sheehans ran one of the three folk clubs that made the Golden Cock pub in Darlington their home. One of the others, the Darlington Folk Workshop, was exactly what she describes the Liffey as not having been, though it also gave me many Tuesday evenings of great music and craic. Later, I opened the Spinning Wheel folk club in the same room.

And here, after an unpardonable delay since she wrote it for me - or was it for the writing circle she belonged to? - is Trish's charming reminiscence of wonderful days past ...

My brother Michael ran the Liffey Folk Club from an upstairs room in one of Darlington’s infamous market place pubs, the Golden Cock.

The Golden Cock, with its reputation for hard drinking and hard brawling, was well suited to a folk club that did not comply with folk’s traditional image.

There were no solemn, long-haired, beardy men at our club; earnestly intoning the collected works of Cecil Sharp, eyes closed, face contorted with emotion and a finger placed strategically in one ear.

No, the Liffey club was rather like the Golden Cock pub. It was a bit wild, always raucous, but above all it was fun. The singers were listened to attentively, but enthusiastic audience participation was encouraged in both verse and chorus, with harmonies and alternative versions welcomed.

For the couple of years that we ran the club, it was the place to be on a Saturday night in Darlington.

On club nights, Michael ensured that every member of the family had a role to play, Kathleen collected the entry fees on the door; Margaret and I sold raffle tickets, competing with each another to sell the greatest number.

At some point during the evening we’d all (apart from mother) get up to sing as the Sheehan Family. Our parents even provided beds for guest artists and on weeks when we had no guest artist they turned a blind eye when we smuggled in our very petite and very much underage youngest sister, Eileen, to perform and astound with her powerful vocals (her Byker Hill is the finest version I have ever heard - CR).

Many of the guest artists from those days later became professional and are still on the circuit today. Mick/Mike Elliot, a gregarious young English teacher from Sunderland, was both a singer and a comedic raconteur. He came to the club only once, but I can still recall the audience’s tears of laughter and roar of approval as he concluded his irreverent but hilarious tale of the nativity in Geordie (Mackem surely, Trish - CR) dialect. It ended with a description of the three kings’ decision to be guided by the blue star featured on the Newcastle Brown Ale bottle and went something along the lines of “Weyhey bonnie lads, let’s gang and folla the blue star.” He later went on to appear with Lindisfarne (as compere, support and occasion guest singer - CR) and to act on stage and screen.

Vin Garbutt, a Middlesbrough lad with a shock of curly auburn hair, a huge nose and a bucketful of charm was another favourite. He often stayed at our house on club nights, which gave my sisters and I ample opportunity to vie for his attention.

Unfortunately, he had a very blond and very pretty girlfriend, exotically named Michelle. Although she never accompanied him to gigs he remained annoyingly faithful to her. Some years later, when I was living in Dar-es-Salaam, I tuned into the World Service one evening and was jolted to attention by the sound of Vin singing a traditional Irish ballad in his unmistakable, nasal Teesside twang. The former ICI apprentice had turned professional and is still on the folk circuit today. The auburn curls have receded, but the nose is just as prominent and I bet he still has the charm.

Nigel Denver, originally from Glasgow, specialised in Scottish and Irish rebel songs and was one of my mother’s favourites. She loved traditional Scottish music and had been brought up on Irish rebel songs. The song Parcel of Rogues was his anthem long before the inception of the SNP. However, like his fellow SNP supporter, Sir Sean Connery, he left Scotland in his youth and is now in retirement in Birmingham.

Perhaps the most memorable guest was Pete Nalder, an English folk singer of the iconic beardy-weirdy ilk. Whilst singing, he accompanied himself playing a pair of spoons and, after staying at our house, left the spoons behind. During his stay he had enthralled us with tales of his mystic powers, which seemed to be mainly conducted via his spoons.

Soon after his visit, the family experienced a series of misfortunes. My mother, who was susceptible to tales of the paranormal, was convinced we were in thrall to Pete via the spoons.

So, early one morning, she wrapped up the spoons, ran down to the banks of the nearby River Skerne and threw them in. Was it coincidence that our misfortunes vanished along with the spoons? We never heard from or about Pete Nalder again.

But it was after the folk evening ended that many of our youthful escapades took place. A gang of us would pile into whatever cars were available and take off into the Yorkshire Dales. On one occasion we stopped at a series of small villages, gathered on village greens with our guitars and sang at the top of our voices until we saw lights come on and doors opening. We then hightailed it back to the cars and sped off to the next village.

On one of these occasions we crept into the grounds of Richmond Castle, climbed the tower and hoisted the Irish tricolour flag from the flag pole. Our mischief was reported in the local paper the following Monday, but blamed on rogue IRA supporters.

The event that eventually curtailed our gallivanting was when we were stopped by the police in Richmond one Saturday night and the hothead, Tony, who was driving the car, was breathalysed. His car was confiscated and we were all stranded for the night.

Fortunately, Tony’s mother lived in the town, but was away for the weekend. We all spent an uncomfortable night in her cottage and an even more uncomfortable morning when we returned home. As there was no phone in the Richmond house, our parents had been frantic with worry. Their worry turned to anger, when we told our tale.

Inevitably we all grew up, both emotionally and physically. Kathleen finished her nursing training and went to Leeds to train as a midwife. Michael joined the navy, but didn’t see much of the sea, as he spent four months in dry dock in Mombasa. A little while later I met my future husband, got married and also went off to sea, leaving the two youngest at home.

So that was the end of the Liffey Club, but not the end of our memories of carefree, fun and often irresponsible Saturday evenings.

It sounds like my sort of place. The sort of places we play these days are far too polite and nice. Hard drinking and brawling seem to have gone the way of cable knit sweaters.

Trish could have said a lot more about the brawling! Ask her brother, or indeed one Christy Moore

Thanks for the link. I loved reading this. Brought back so many memories.

I saw Vin many times in various folk clubs around Sunderland in the 70s and 80s. A great singer, guitarist and songwriter and the funniest man I have ever seen, he should really be a household name.