Continuing the occasional Salut! Live feature on gems from the past rediscovered in the attic, on neglected garage shelves or online ...

February 2021 update: regular readers will know I am conducting a pre-spring clean of the tidy, tidying up and if necessary amending older items. Recent discussion at Salut! Live of The Curragh of Kildare, another song associated with the Johnstons, prompted me to look up this post from nearly seven years ago. For me, it presents the band at its best.

Back at the end of the 1960s, the Johnstons from County Meath were something of a folk supergroup with a following akin of that of the English family band, the Watersons, and gathering critical acclaim.

The members were two sisters, Adrienne and Lucy Johnston, Mick Moloney and Paul Brady. Another Johnston family member, Michael, had been in the band earlier.

As I have written in the past, the Johnstons played outstanding sets at two folk clubs I ran with friends, in Darlington and Bishop Auckland.

I remember pompously offering Frank Peters, an executive at The Northern Echo, who also wrote on folk music, one review ticket (eight shillings for members, 10 bob for non-members - just £6.23 or £7.79 at current values) for the Darlington gig at the Spinning Wheel club, upstairs in the Golden Cock pub, provided that he paid for anyone he wished to accompany him.

He may have accepted the review ticket though I no longer recall whether he bought a second. I am fairly sure he didn't turn up - and that no review appeared (hardly a surprise if Frank didn't go). From the date shown on the ticket, August 8, we can identify the year as 1970; the Johnstons' appearance at the Bishop Auckland club would have been later the same year or in 1971. 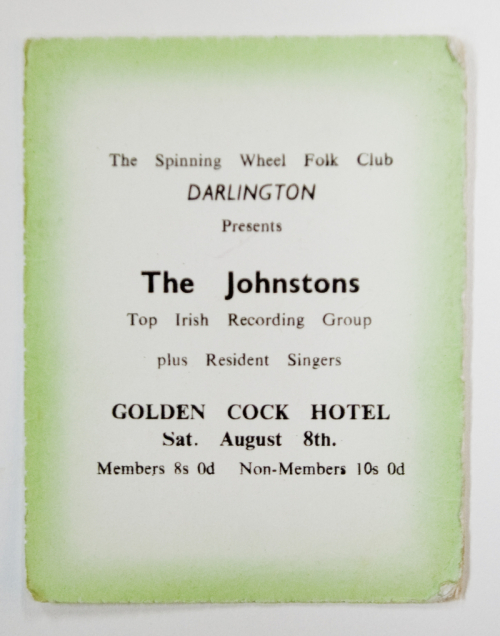 I loved that band.

The track I have chosen came into my mind today for some reason. It is a stunning a cappello version of Ewan MacColl's Irish exiles leaving their homes in Connemara, Lough Derg, Wicklow, Armagh, Carlow, Mayo, Longford and Achill Island to "drive a tunnel through the London clay".

The unfortunate Adrienne died tragically, and mysteriously at just 36. The others would presumably by now qualify, as I do, for freedom passes to ride through those tunnels on the Tube.

The band's range was impressive: traditional Irish, lots of MacColl's work, US contemporary folk (notably Leonard Cohen and Joni Mitchell) songs from other parts of the British Isles. Moloney and Brady went on to have good solo careers. I hope you enjoy it as much as I still do. 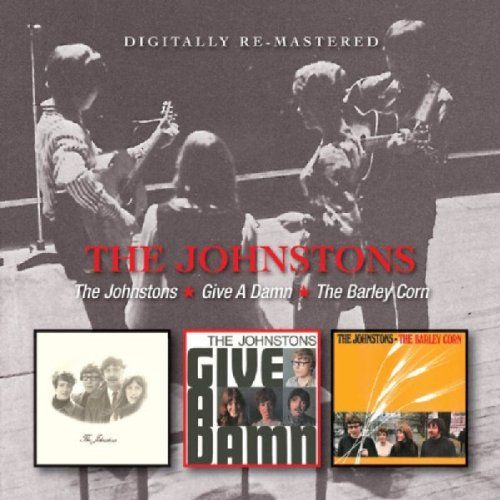 * You cannot, as far as I can see, buy the album from which this song is taken, The Johnston (1968), on its own at Amazon but it does appear as part of a digitally remastered compilation The Johnstons/Give a Damn/The Barley Corn and costs from just under £9 to under £15 depending on which offer you go for.

Via Facebook
Great singing! Thanks for posting this gem

Excellent, thanks for posting!