Every now and then, I allow myself to stray from the tightly drawn waters of folk and folk offshoots and draw attention to something else that deserves a listen.

Since returning to France after London hibernation, I have found myself stopping to appreciate one song that keeps cropping up on the radio. Lots of changes in tempo, adorable female voice, great tune ... in short, a bloody good pop record.

The DJs stubbornly refused to say who it was, what it was. Madame Salut thought she heard "Toulousain" but no such group appeared to exist. The song is in English and previously, she'd thought it might be an Irish singer. I was sure it was American. I even looked up the singles charts of France and the UK, to no avail. And I wrote down snatches of lyrics in case Monsieur Google could assist.

Finally, today, Mme S caught it yet again, on Radio Provence Bleu, and this time the presenter told her what it was. A duo - yes, a duo from Toulouse - and they call themselves Cats on Trees, though they also have proper names, Nina Goern and Yohan Hennequin, for which information I am indebted to the website of a Toulouse newspaper, La Dépêche du Midi.

And the song is Sirens Call. It was released last year and reached the heady heights of third in the French charts, fifth in Belgium (Wikipedia specifies Wallonia, which is odd since the song's in English) and - wait for it - 44th in Switzerland. There's also an album, just Cats on Trees.

I went on to learn from Wikipedia that Goern used to belong to Aeria Microcosm while Hennequin was in a band called My Own Private Alaska.

French pop rarely travels beyond francophone world. This example is, or should be, l'exception française.

You may or may not share my delight at hearing the record. Say so either way and then we can get back to folk, folk-rock and the blues. And if you like them, buy the album via Salut! Live's Amazon link: http://www.amazon.co.uk/exec/obidos/ASIN/B00F0TQQO0/salusund-21 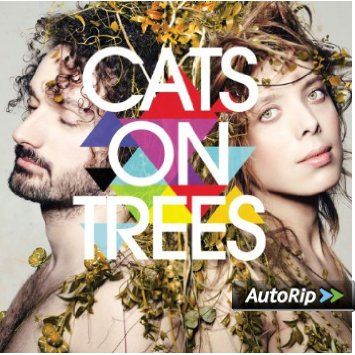 All the same, one reason the updates are so infrequent is that it seems a waste of effort to post more than I do. Conversely, the less I post, the fewer people come to look.

Without exactly expecting to be beaten to the ground in the rush, I am offering membership of the Friends of Salut Live - thus dispensing with the very French exclamation mark - to all those who share my interest in what I always called folk music but has come also to be known as roots.

I do not go in for the vaguely allied sub-genres or their hideous titles - technofolk, grunge folk, folk metal, folkadelia, neofolk - but that does not mean none of them produces worthwhile music. And my own tastes are reasonably wide.

This site contains an archive of which I am fairly proud and which I believe would interest many of those who like the same kind of music and its offshoots. I want to build on that archive and post a new piece at least once a week. That is where Friends of Salut Live would come in.

You may become a Friend of Salut Live for a once-and-for-all payment of between £10 and £30.

As you will see on reading further, joining up will entitle you - if you opt for it - to an introductory gift of CDs.

Postage will be paid by me for membership addresses within the UK or the Republic or Ireland but I am asking for a contribution of £3 towards postage to the rest of the EU or £5 for the rest of the world. The payment button - via Paypal, which you can use even if you do not subscribe simply by using a credit or debit card - has a dropdown table to make clear the relevant amount in your case.

For £10, you get membership of the Friends of Salut Live. In return is my commitment to maintain the site more conscientiously.

But I will also send each member who chooses the upgraded membership an introductory gift of four CDs chosen at random from my vast collection of traditional and contemporary folk, country, blues and folk-rock albums. The first 10 who become these upgraded Friends will receive five albums each. The first to go for the simple £10 membership will receive one.

Some of the CDs waiting to be mailed out are old review copies sent to me in professionally more active times. But since I am selling membership of a club, not CDs, this should not present a problem unless I am persuaded otherwise. Some have been played; some remain in their packaging (sorry, but when at the Telegraph, where the day job was pretty demanding, I used to receive far more than I could ever hope to listen to).

I will consider whether it is possible to offer other benefits of membership, such as raffles for concert or festival tickets, but I cannot enter into negotiations on the albums to be sent, beyond stating that every effort will be made to send each joining member a varied selection.

And whether or not you choose to join, please come back here from time to time to see what I am up to do.

It can identify the track you are listening to even from a small snatch of music.

I agree with your reaction to the track.

Not only does it avoid being formulaic, it also has a certain freshness of sound, largely attributable to the wistful female voice.

In fact it is not at all French.

Having said that, I like quite a lot of contemporary French music, which in general is a lot more literate than its British or American equivalent.