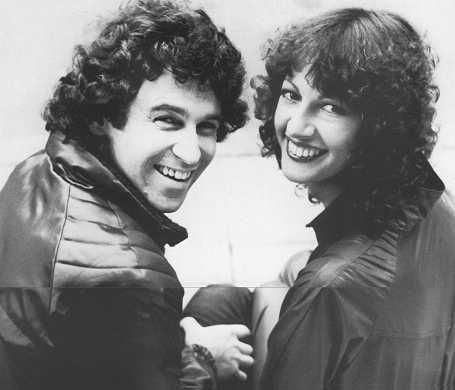 Dave Shannon, who has died aged 67, was an exceptionally gifted musician, writer and performer who enthused many of those who encountered him and his work.

With hs great friend Sam Bracken, he played extensively in Northern Ireland and then the folk clubs of Great Britain before they recruited a fine singer, Fiona Simpson, to form Therapy, an innovative trio that included a few traditional pieces in an otherwise largely contemporary set.

The effect, back at the start of the 1970s, was explosive.

Of the bands and singers who performed at the clubs of North East England that I either ran or visited regularly, I remember few with comparable audience impact.

Only the Johnstons, the Northern Front, Noel Murphy, the High Level Ranters, Young Tradition and the Reivers - in their much different ways - spring instantly to mind. Others such as the Watersons were considered to have outgrown the smaller clubs.

Sam recalls at the Mudcat Forum - see the thread on Dave here - hearing of Dave's reputation for guitar-playing virtuosity in the Belfast of the late 1960s.

"I therefore went to watch Dave play tunes at a gig at the Imperial Hotel in Belfast," he says. "The tunes included Doc Watson's Windy and Warm and Davy Graham's Angie. I made myself known to Dave and asked him for advice on how to improve my playing, little realising that this meeting would be life changing for both of us."

Therapy enjoyed fair success, playing at the 1971 Cambridge Folk Festival and releasing an album, Almanac, a song for each of the stars of the Zodiac, all written and arranged by Dave. It was a very good recording that nevertheless did little justice to the depth of the trio's artistry and appeal.

Sam later left, popping up solo but also - as I recall - in Five Hand Reel, leaving Dave and Fiona to continue as a duo until Dave found a niche at the BBC. Among programmes he produced were Paul Jones's show - Sam recalls it as R&B while I could have sworn it was the Blues - and Bob Harris's country series.

I have three powerful memories of Dave, one of which I have already shared with Mudcat subscribers. That related to our first meeting, when Therapy played the Spinning Wheel folk club at the Golden Cock in Darlington.

I have no recollection of what we paid them. Perhaps £18-£22 plus a bit of beer and petrol money. They were sensational. What sticks in the mind is of the band following Cat Stevens's Wild World and, no doubt, a few other pop or rock songs, with Blackwaterside.

"And now for those who thought they were entering a folk club and wondered what had gone wrong," Dave had said. Fiona sang it beautifully.

The other memories are quite trite but I cannot think of Dave without them streaming into mind. One was that they arrived for one folk club night, at Darlington or Bishop Auckland, having spent a gloriously sunny and therefore atypical afternoon swimming in the Tees, which somehow seemed a very unfolk thing to do in that age.

And then there was the discovery that salads can be fun. Therapy had stayed the night, post or possibly pre-gig, at the homes of my parents and a friend, Phil Steele, an accomplished guitarist. Next day, my (French) wife and (well brought-up) Fiona insisted on preparing, as lunch, a salad with real, home-made mayonnaise and seafood that was such a revelation it made all the blokes forget their dreams of a bumper roast.

From Sam's summary, I will just add that Dave was born in Belfast, graduated with a first in music and history of music and taught at a Quaker school in Lisburn ("if you stray into the wrong part of Belfast, they want to know if you're a Protestant Quaker or a Catholic Quaker," I can imagine him joking).

Very early in his career, he met and married the woman of his life, Linda Wright (I've met Miss Right," Sam remembers him saying). His BBC work was in Manchester and they settled in Sale. After retiring from full-time work, he and Sam resumed their partnership, playing as Alternative Therapy for several years until ill health caused him to abandon performing.

To Sam, Dave Shannon was a "musician, arranger, guitarist, pianist, mentor, teacher, composer, singer and most of all a good friend". He is survived by Linda and their son, Davy, with whom he was still well enough to play a duet at his wedding last year.

* The photo of Dave and Fiona is from the Belfast Folk website at http://www.belfastfolk.co.uk/index.asp . I will remove it if there is any objection. At the site, Jackie Dixon recalls: "They played for us in the Walnut in the late 60s and it was probably the only gig we sold tickets for in advance ... and they packed the place." 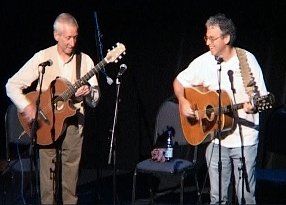 Also from the Belfast Folk site: Sam and Dave in later years

This came from Brendan Fulton of the Belfast Folk site mentioned in the piece:

I am pleased to be able to grant permission for the use of the the photos of Dave Shannon with Fiona and Sam Bracken with the acknowledgement and link as you say. We are saddened here by the death of Dave. He came back to play in both our Reunions in 2006 and 2009 both with the Folk Union and with Sam Bracken and Sam's wife Elaine. I was at Queen's University Belfast at the same time as Dave. We knew then that he was a superb talent but like many others we had it confirmed when he went across and made such an impression on the bigger island. It is so helpful getting such a picture of that from your tribute.

Too sad for words. I remember them at the Aclet well. After one gig, we were having a drink courtesy of the landlady Sybil Livesey (sp) and Fiona said on one song she'd really hit a bum note and hoped it hadn't been too noticeable. I asked her if she hadn't heard the collective horrified intake of breath from the audience and then had to reassure her that I was joking. I call them coming into the Echo/Despatch office, too, one afternoon for reasons unknown. Lovely, lovely people. Dave Shannon was as warm and friendly as he was talented. A huge loss.

I remember fondly the skills and talents of both Dave and Fiona at the Talisman Folk Club in Hitchin in the early 70s - struck by Fiona's haunting voice and Dave's absolutely mesmerising guitar playing. His open tuning (G) arrangement of Oor Captain Cried All Hands still forms a part of my set when I play live (rarely, these days) - I shall be doing it as a tribute, late, I know, I only just found out about his passing) o Thursday at the Ring O' Bells, Wookey. Two lovely, warm and talented people. Dave will be sorely missed.

Listening to Therapy, on my iPad as I write. My hubby converted our LP for our assorted idevices. I thought I would Google Dave and Fiona. So sad to learn that Dave has passed away. We saw them in the 70/80's (unsure) at Ashton-on-Mersey Cricket and Tennis Club in Sale. It was an excellent night, with much laughter and brilliant music - so much so that we bought the album, and got it autographed! We still play the music, with fond memories. What a loss. Our sympathies to his family and friends.

I have stumbled onto this page and am in shock. I knew Dave at Queens and remember him playing his version of Hey Joe dedicated to me as I served snacks etc at the folk club. He was a great mate and I really enjoyed his version of Angia.
I was at a folk do at Murdoch University in Perth (Australia) and during as break one of the guitarists started playing Angie. I told him I had a uni mate who played that. He then said he learned it from Dave Shannon! Small world, now less so with Daves passing. RIP

Lovely anecdote, Bob. Dave had rare gifts as well as being a terrific person.

They played a great set , to a packed audience, songs indisbursed with daves . They stayed with us after the show and went on their way next day , they were on a tour of military bases out in Germany back in 1975. It was so sad to hear of his death, a truly remarkable person

We are all much the poorer for Dave's passing. A great bloke and a very talented musician and performer. We saw him perform at several venues across the North East in the 1970's with Fiona but have particularly wonderful memories of them playing at St Mary's Folk Club Durham University. Still have their vinyl albums - and still enjoy them immensely! Sincere condolences to all his family, and RIP Dave!

I just heard in recent days of Dave's passing through speaking to another old school pal, Ernie Rea, who has worked for the BBC. Dave, Ernie and I all attended the same school in Belfast (MCB) and all played for the boys hockey team - Dave was a VERY gifted hockey player. He was the captain of the team and was VERY well liked and respected by us all. After leaving school we all went our separate ways. My only and last contact with Dave was many years ago when he appeared live on the radio on 'Friday Night is Music Night'. When the show ended I phoned the BBC and much to my amazement they were able to put me through to Dave who had not 'left the building'. We had a great chat and parted with much laughter as we reminisced about 'old times' He was great guy to have know. Sincere condolences (albeit belated) to his family.

I'd love to know which Facebook page is generating so much interest in this piece today. Can anyone help?

Love the gigs they played at Sedgley Park College Folk Club 73 to 76 goods friend with Mike Harding .
So sad but great memories.

Favourites at Gentlefolk (Cherrytrees Alcester) in the early 70s. Great memories of a special time.

I loved Therepy and saw them many times, even shared the stage with them on several occasions. Originally as as Sam and Dave, then with Fiona and just Dave and Fiona. I have a recording of the three of them at Barwell folk club 1970 (which I sent to Fiona and Dave a few years ago) . I was very sad when I heard of Dave's death. He was a lovely guy and very talented musician.