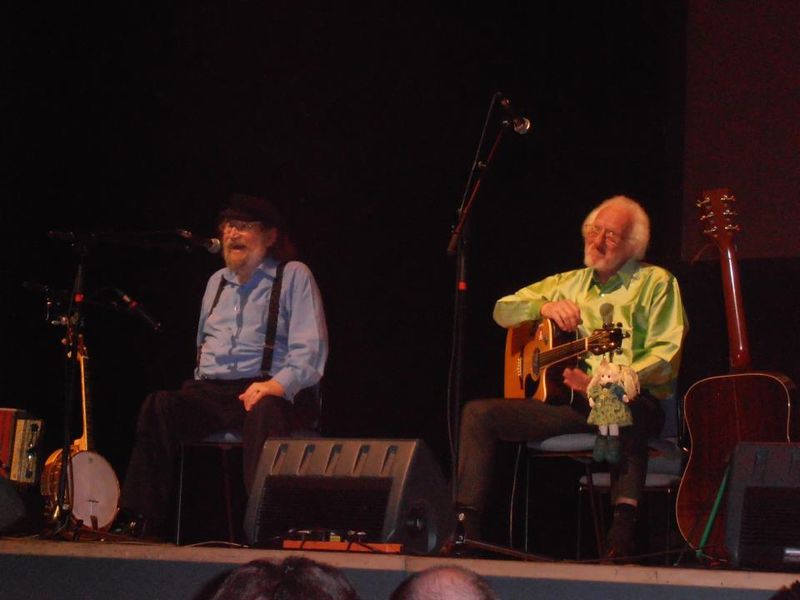 Last summer, a smashing lunch with a couple we hadn't seen for years was abruptly interrupted when the man slumped forward, head on our table in the beer garden of a pub in Ealing.

By the time paramedics arrived, with impressive speed, our friend had recovered. But what turned out to have been a momentary loss of consciousness, possibly related to a clash between medication and something he had eaten or drunk, had initially made me think he had died.

He is about the same age, 72, as Barney McKenna, last of the original Dubliners, who also seemed to ''nod off'' while seated at a table last Thursday morning, but did not reawake.

The Dubliners, especially with that first line-up of Barney, Luke Kelly, Ciaran Bourke and Ronnie Drew, were a very special band, and Barney's speed, dexterity and flair on tenor banjo, along with his sparkling personality, accounted for much of what was good about it.

It is some consolation that he lived to see the band's extraordinary 2012 milestone, the completion of 50 years since formation, and a lifetime achievement honour in this year's BBC folk awards.

And it is not remotely surprising that hundreds of people should have packed into St Patrick's church in Trim, County Meath for his funeral mass. It is a desperate shame that he had to go, but fitting that family, friends and admirers gave him such a grand send-off.

The Irish president Michael D Higgins was the most prominent of several dignitaries among the mourners, a mark of the national esteem in which Barney was rightly held.

I am indebted to the Irish Times for the detail: later colleagues in The Dubliners, notably the great fiddler John Sheahan, were among the musicians who played a medley of reels, Fermoy Lassies and Sporting Paddy, familiar to countless fans over the years as the opening tunes of any Dubs concert.

Fiddler’s Green, a song Barney loved to sing, was given a gentle hearing and a piper, Peter Donnan, played the coffin to the grave to the strains of Raglan Road. I describe John Sheahan as a ''later colleague''. In fact, it is difficult to think of the Dubliners without also thinking of him; he has, after all, been a member since 1964.

And it was John who offered fellow mourners a flaour of Barney's last few days. Together, just the day before Barney died, they had played with a friend, Michael Howard, at another funeral, that of Dara Ó Broin, an RTÉ colleague. He was evidently in fine form, full of anecdotes. Next morning, seated with Michael at breakfast, “he dozed off for the long sleep. What a lovely way to go, having a cup of tea with your friend”.

Few who are fond of Irish music would doubt the supreme role of the Dubliners in its popularisation and the growing maturity it acquired moving forward from the simpler, though still important, revivalist work of the Clancy Brothers and others.

Barney and John, in particular, added high levels of musicianship, Luke's singing brought depth and while the best years, in my own view, came to an end with Luke's tragically early death, it was difficult to leave any Dubliners concert without a feeling of well-being as tunes and songs and banter swirled around the brain.

Many who got to know Barney McKenna also talk of his Barneyisms, the idiosyncratic way he had with words.

Two delightful examples spring from the tributes at the mudcat.org forum.

I was the Dubliners' first road manager when they hit the charts with Seven Drunken Nights and spent a couple of memorable weeks trying to look after them in clubs in the north of England.. Barney was one of the funniest men I knew and his Barneyisms are legendary. He once told me a shilling was worth a few bob in the old days. Only John Sheehan remains from the group I knew. Barney was great musician and human beIng. Sad.


Finbar Furey once recalled getting a lift into Dublin with Barney, and telling him to slow down bejaysus, Barney replied ' if you think this is bad, you should be with me when I'm on me own'.

Barney McKenna leaves memories of great nights of music and, for those who knew him beyond the stage, warm reflections on the man behind the music. Rest in peace.

* With thanks to Polly Holmes for the photograph showing Barney (left, with Eamon Campbell) on stage recently at a St Patrick's Night concert in Birmingham.

Talking of Barneyisms, he'd have loved this, from my former employers at the Daily Telegraph ...

''... almost single-handedly introduced the tenor banjo to the forefront of Irish music.''