Salut! Live is sad to report that Ray Fisher, a member of the eminent family of Scottish folk singers and musicians, has died aged 70 after a protracted struggle with illness.

The warmth and the distress evident in responses to news of her passing offer some measure of the affection and regard in which she was held, and a few examples of the messages will be included in this account.

I became aware of her work four decades ago when she recorded and performed with her brother Archie.

Ray was a familiar figure in the North East, where she had met her husband, Colin Ross, and was regarded, as were the Fishers generally, with some awe by those of us involved in the folk clubs of the era.

Ray was to show herself to be one of the finest interpreters of Scottish ballads, her technique and command owing something to one of her great inspirations, the renowned singer Jeannie Robertson. As the recording I have chosen shows - explore YouTube; there are other gems - her singing was clear, distinctive and highly expressive.

She won a respectful, admiring following far beyond the lochs and glens of Scotland and, while the gravity of her illness was well known to close friends and acquaintances, her death will be a source of great sadness to many.

Ray's husband is an important fixture of North-eastern folk music, known for his work as an accomplished player of the the Northumbrian pipes and the fiddle, a skilled maker of those (and Scottish) pipes and a member of the High Level Ranters. The couple met in 1958 at the Bridge folk club, formerly the Folksong and Ballad Club, in Newcastle upon Tyne, of which Colin was a founder member.

Now for a selection of those tributes, all taken from the indispensable Mudcat folk music forum:

A marvellous singer, and a joy to know - the world has lost a beautiful person. I first met her at Mariposa in the 70s, and had to priviledge of driving her to a number of appearances in NY - Pennsylvania. She was a gracious and generous host when I visited the UK in the early 1980s. Heard her again during an assignment to England in the late 1980s. Her increasingly rare US appearances were always a "must go" event. A mixture of sadness at our loss, delightful memories of her, and the hope she is now at peace after such a long and devastating illness. Heartfelt condolences to Colin and their children, her siblings, and many admirers. She will live on in our memories, and her too few recordings ... with a heavy heart.

Very sad news indeed. a great singer, a great personality who brought humour and warmth to her singing and performances.

I am so very sorry to hear this. She had everything - talent, warmth, humour, wonderful personality both on and offstage.

She has been part of my folk club life since the beginning of the '60s in Newcastle's Liberal Club, then the home of the Folksong and Ballad Club. A very different place from the folk clubs of today, but Ray's engaging personality made everyone in the room feel like they belonged to Glasgow! My sincere sympathy goes to Colin, as a recent fellow widower, there are no words to describe the pain.

The website of the Scottish Traditional Music Hall of Fame states this:

Born in Glasgow, Ray Fisher is one of three out of a family of seven children whose musical talents have made the name Fisher synonymous with Scottish folk music. Ray, her brother Archie and sister Cilla have trodden their own distinct musical paths, each carving out an international reputation. Archie and Cilla did that from home bases in Scotland whereas Ray has spent most of her life in England. She has been a champion of Scots folk song over a generation and for a long time was the voice of Scots song in England and a constant at The National Festival.

In her early days Ray performed together with her brother Archie as a duo appearing regularly on television. When doing a folk club booking in Newcastle, Ray met and subsequently married Colin Ross, a member of the High Level Ranters, a decision that spelled the end of any lingering thoughts of her being a school teacher. Song would be her life, and so it has been.

The move to England turned her towards being essentially a solo performer and was a spur to concentrate on ‘the muckle sangs’, the big ballads which helped to establish her reputation as an artist.

Ray has been an essential link between an earlier generation of singers and the present. She is an effective tradition bearer, careful to acknowledge her sources and appreciative of what has been given to her.

(The article ends with this quote from Ray herself:)

“Personally, if I’ve made some contribution in my life and maybe moved people to laughter or tears, that’s what it’s all about. I haven’t had any big nationalistic drive, you know, for Scottish independence or things like that; but I’m part of Scotland and it’s part of me as well... And if people out there have got half the joy I’ve had, well, I’m happy.” 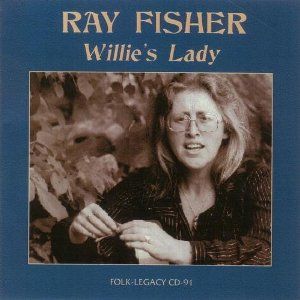 * Ray died on Aug 31. RIP. I am sorry that this appreciation is short on detail. I am away from most of my files and have struggled to find a word about Ray's death in the online presences of BBC Scotland, The Scotsman, the Edinburgh Evening News or the Glasgow Herald, though I am sure this will be rectified. Thanks to the Guardian, which now published an obituary, I can add that Ray leaves, as well as Colin, her husband, three children: Fiona, Andrew and Duncan.

Today (25 November) I have only just seen the news that Ray Fisher died in September. As a university student at Southampton in 1969, I (and two others from Southampton) joined a group from Tyneside attending a bagpipe festival in Strakonice, Cezechoslovakia. Colin Ross and Ray (with Foster Charlton) organized a small group of pipers and dancers (rapper and Morris) and we had a whale of a time dancing and singing our way across Europe by car. It was a delight to know Ray Fisher, and I am saddened to hear of her untimely death.