Only in a Cape Breton hospital ...

Not Song of the Day, since most of what you'll find here is instrumental as Salut! Live spreads wings and look west across the Atlantic. You will have to be patient - or cheat and scroll down - for the hospital reference

This started life as an attempt to devote an edition of the Song of the Day series to the music of one corner of Canada.

After I posted a video of Eric Clapton playing Rambling on My Mind, a brief discussion took place at Facebook. My colleague Brian Kerrigan - declaring himself more a Jeff Beck man - welcomed the clip but expressed surprise that Clapton was paying a Gibson Explorer and not the familiar Stratocaster.

But Brian liked the clip, which encouraged me to challenge him to come up with something from his neck of the woods, Cape Breton.

I am a great admirer of the fusion of Scottish, Irish, Acadian and other musical influences to be found in this beautiful part of Nova Scotia.

Memories of attending a Celtic Colours festival back in 1998 remain strong. You can read what I made of the trip at this link from the Daily Telegraph travel pages, but the essential extract dealing with music read:

We had two missions*. The first - to listen to as much of Cape Breton's invigorating, Scottish-inspired traditional music as possible - was easy. Half the population seem to be musical or, at least, closely related to a musician. Our visit was during the Celtic Colours folk music festival, firmly established in only a couple of years as one of the more enjoyable of numerous worldwide events of its kind. The festival brings some of the finest folk musicians of the British Isles to an area where the legacy of the Old World has been augmented by New World innovation and elements of Acadian and Mi'kmaq Indian influence to produce a vibrant living tradition. In more than 30 years of listening to the best traditional music Ireland can offer, I have rarely encountered live performances as exhilarating as those I caught during Celtic Colours. It is not surprising that Cape Breton musicians enjoy increasing popularity in Europe. "We'll start with something and see where it goes from there" is the instruction fellow-musicians routinely hear from from Buddy MacMaster, a veteran fiddler credited with saving the island's music from extinction. MacMaster is in his mid-seventies, but countless young music-makers follow his example. His niece, Natalie, somehow plays the fiddle sublimely while executing nippy dance steps.

"There is nothing uncool about a young person wanting to play this music," says 20-year-old Lisa MacIsaac, another accomplished fiddler, whose brother, Ashley, has won a broader Canadian following - and some tut-tutting among purists - for his grunge embellishment of traditional styles. "In fact, there are so many really good musicians that it is hard to make a living without moving away."

Back to Brian Kerrigan.

This - with the clips - was his response to my request for signals to some good Cape Breton clips:

"Wow, feeling a lot of pressure here.... Well, to start, I personally think the most exciting act to come out of Cape Breton recently is Carmen Townsend. Brilliant talent - singer, song writer, and guitarist. Mind you she might be too far into the rock end of things for the Folk, Folk-Rock, and Roots mandate. But Carmen's music is very Cape Breton right now ...

" ... Beyond that, certainly Natalie MacMaster, Ashley Isaacs and The Rankins helped put Celtic music back on the map during the 90’s. If you want to get back to the old soul of Cape Breton music you can't miss with Rita MacNeil, The Men of the Deeps, Buddy MacMaster, or John Allan Cameron. Heck, the problem with Cape Breton is they're all amazing musicians, it's something in the water.

Ah, Brian, you most certainly did. But I have saved a priceless anecdote - also from Facebook as the discussion broadened - for last.

Ted Williams, a friend of Brian's, wrote this after visiting someone in hospital:

The guy two beds over is Dougie Grant a fiddler from Inverness, contemporary of Donald R Cameron, John Allenstein and Buddie MacMaster.

Two or three time a day he plays - we just shout out the names of jigs and reels we remember-he plus them all Well!
Only in a Cape Breton hospital eh?

* The second mission on my visit to Cape Breton was more complicated: finding a lobster that had nothing to with McDonald's or sweet, gooey sauces. The Telegraph article explains the progress of that mission. 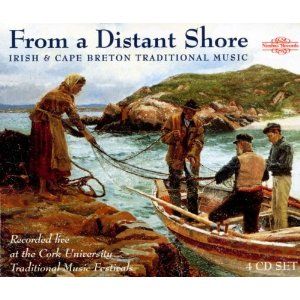 ** If you want to add some Cape Breton music to your collection, explore what is available at Salut! Live's Amazon link. The box set shown seems a bargain at under £18.