I have felt reduced to unaccustomed speechlessness by news of the death this week of Mike Waterson, whose voice as part of the wonderful Yorkshire singing family I hear ringing in my ears as I write.

In common with many, I had no idea Mike was ill until I saw mention of his passing at the indispensable Mudcat folk music forum. Then I explored further and there had been much comment and encouragement in earlier threads at the site. 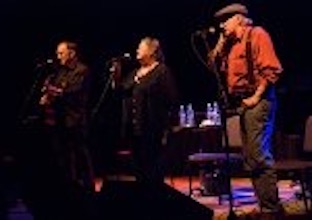 Mike Waterson with Norma Waterson and Martin Carthy, by Roger Liptrot for his Folk Images website

There is, in fact, no need, to bother yourselves too much with whatever I have to say. My absences from the UK in recent years have taken their toll on my day-to-day knowledge of what has been going on in folk music.

But if you visit this Mudcat link, you will see quite clearly the depth of affection people who love our music felt for him.

You will also see compelling words reproduced from The Guardian, where Derek Schofield wrote a fine obituary and Colin Irwin added some moving personal recollections.

But here are a few examples:

A huge loss but Mike has left a massive legacy of songs, knowledge and joy.

I was lucky to hear him sing on a number of occasions, in various combinations, and to meet him once or twice, when he was lovely, funny, and gracious. His passing is a great loss to the traditional music community on the whole.

Mike will quite rightly be heralded as one of the key figures of the British folk revival for his long-running role in the Watersons, the Yorkshire singing family whose dynamic voices and instinctive harmonies galvanised the nascent folk scene back in the day and whose early career was guided by the great folklorist Bert Lloyd. "He asked us to sing a song once, which we did, and then he asked us to sing it again," Mike told me, recalling early days with his sisters Lal and Norma. "When he asked us to do it yet again we said are we doing it wrong? He said: 'No, it's pure indulgence because it's giving me so much enjoyment.' He told us we had wonderful mixolydian harmonies. We all looked at eachother and when we got home we went to Hull Library to find out what it meant."

... our fondest and enduring memories of Mike will be of the many, but alas all to infrequent, times when we were simply just in his company sharing the craic. He was one of life's natural raconteurs with an encyclopaedic mind which was crammed with stories - most of which were spiced with his wicked sense of humour and fun. He was a lovely, honest and genuine "bloke" and it was an immense privilege to have known him. He'll be greatly missed. 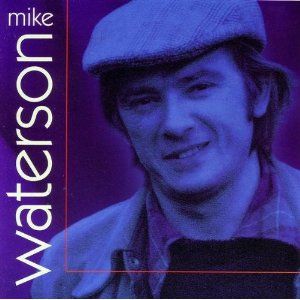 That is what others have said. As for me, I first saw Mike 40 years or so ago, as part of the Watersons in what I distinctly recall being billed as a farewell performance at that powerful symbol of British folk music, the all-night, alcohol-free Les Cousins club in Soho.

The last time I saw him was a few years ago at the Celtic Connections festival in Glasgow. He sang with that glorious Yorkshire voice of his and chatted happily at the bar even though we had never previously met.

Mike's love of traditional music was profound but he also wrote clever, memorable songs of his own. He would have been a major player in the folk revival in his own right, but will naturally be remembered most for all he did as part of the Watersons.

The description of the band as the folk movement's answer to the Beatles has become a cliche. Yet it is beyond question that the group came as close as it was then possible to making traditional folk song seem cool.

To the Waterson family, as far as it extends, I offer my deepest condolences. Rest in peace Mike.