Unthanks: agog on the Tyne

The headline is borrowed from a tabloid sub-editor handling a long-ago rugby story, but sums up Pete Sixsmith's night of wonder at the magic of Rachel and Becky (plus friends) ...

When I last saw The Unthanks, four years ago at Darlington Arts Centre, the line-up was in the processs of fracturing. They were touring The Bairns album and it was a real mixed bag of a night - at times inspiring, at other times rather twee.

Now, two albums later and with a new band/arranger, they have completed metamorphosis from naive young Northumbrians into an act capable of providing an audience with a superb night's entertainment - as they did at The Tyne Theatre last night.

The place was crowded with folkies and friends and there was a great sense of anticipation in the venerable old auditorium. A fine opening set from Trembling Bells (a mix of folk/rock and prog rock - interesting) set the evening away and when Rachel and Becky and the seven-piece backing band arrived on stage, there was a real hum of excitement.

They did not disappoint. Rachel is a lovely singer, with a very clear and sharp voice while the more breathless Becky complements her well. This is a splendid double act and deserves to be mentioned in the same breath as Shirley and Dolly Collins and Norma and Lal Waterson.

Arranger/pianist and husband of Rachel, Adrian McNally has tightened the band and, with a small string section, trumpet and drums and double bass, they bring the best out of the Unthank sisters and their dark songs.

Not that all the songs are from Northumberland. Mixed in with examples from the tradition and also the Tyneside Bard, Joe Wilson, are the works of Tom Waits, King Crimson and Robert Wyatt, those last two suggesting a serious flirtation with 70s Prog Rock. I await with eager anticipation their version of Yes's Wondrous Stories.

It really was a splendid set. At Darlington, they were just learning the craft of putting on a show; now they have drawn on their experiences and have a lovely rapport with an audience that was delighted to sit back and have its tummies tickled. 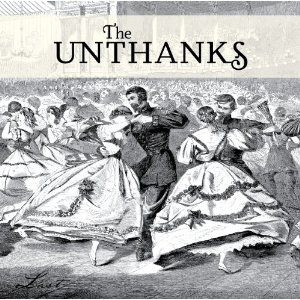 Most of the material came from Last, the most recent album. Gone To The Kye, a song about cows and death, made you feel like a wandering cowherdsman while more modern songs like the album title (a McNally composition) were delivered in their melancholic style.

The evening never flagged and they ended with Terry Conway's wonderful song Farewell Reegality (sic), a song about land transferred from the Church to the people of Hexhamshire. This gives me the goosebumps; the slowed down version they presented here brought out goosebumps on the goosebumps.

A truly enjoyable night in Newcastle - and as a Sunderland supporter, I have raely said that over the years.


* If tempted, buy the Unthanks' album Last, plus anything else mentioned at Salut! Live, at this Amazon link

I've seen this band 4 times now since 'Here's The Tender Coming' was released, the first 3 times playing largely the same set based around that album. Unsurprisingly, they are now concentrating on the 'new' songs but I was still a bit disappointed they couldn't squeeze in more than two songs from the previous record. The best word I could come up with to describe my feelings about the previous 3 shows was 'thrilling', Monday night was just 'lovely'. I think it was because of the overall sombre, sedate nature of the tunes (maybe not entirely unconnected to Rachel being 8 months pregnant). However it was probably also down to the need to listen to those sorts of songs in comfort and the front row circle seating at the Tyne (which we thought looked great, right next to the Unthank family box) proved anything but comfortable!