Home Archives Profile Subscribe
Joan Baez in Marseille: no Farewell yet from this Angelina
Acoustic Festival of Britain: the Spinners honoured

In sore need of being cheered up, Pete Sixsmith found a musical remedy: English folk's compelling little and large show ...

Folk music is littered with great duos – Swarbrick and Carthy, Shirley and Dolly Collins, Foster and Allen, - and Spiers and Boden can take their place in the Pantheon of Performing Pairs after a rousing show at The Sage, Gateshead on Sunday night.

As a gloomy and disgruntled Sunderland supporter, I was desperately in need of a pick-me-up and the pair certainly gave me that, with their indie take on traditional music. One tall and thin, the other short and a little tubby, and both dressed in dark colours they make a great combination that melds Jon Boden’s very distinct voice with the melodic box playing of John Spiers.

They sold out Hall Two (400+) and the audience, having enjoyed a very promising opening set from a Folkworks graduate, Ian Stephenson (and Friends), sat back to enjoy an hour and a half of songs about medieval psychopaths, man-eating wild boars, pirates, beggars and young women from Essex playing fast and loose with morals.

They have a wonderfully irreverent approach to some of the songs that they do. The Birth of Robin Hood warns of falling in love with the daughter of a psychopath who loves hanging people, according to Boden, and this it clearly does. However, whether more traditional singers would have introduced it in quite this way is debatable.

As always, there was that dark edge to their songs. Horn Fair, collected by Ralph Vaughan Williams and about as far away in temperament from Boden as you could get, has a very sinister aspect and, according to the SB interpretation, results in couplings and other shenanigans; Essex, as Boden made clear, hasn’t changed much. 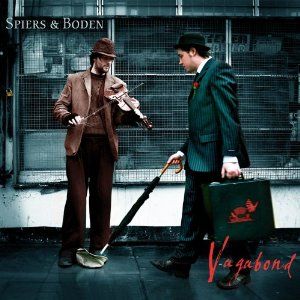 The audience were encouraged to join in and in Bold Sir Rylas had three chorus lines to warble away at. It’s a great song that suits their style of foot stomping folk really well. Coming from an area that is renowned for its historical wild boars (Ferryhill, Brandon and Bishop Auckland all had these fearsome beasts preying on the locals) the participation rate was excellent and we were told that on their last tour, the audience at the Cumberland Arms in Byker had won the “Best In Show” by a country mile.

The tunes sections were equally good, with Boden’s mesmerising fiddle and the super accordion and concertina playing of Spiers shown to best effect in their lively Sloe Gin Set. Slow tunes like Dawn Chorus were equally good and showed the lyricism of the accordion, an instrument that has, in the past, drawn much scorn.

They gave us one encore, borrowing Bellowhead’s New York Girls (“Well, they’ve pinched plenty of ours” said Boden) and sending a sunburnt audience home very happy, even those who were still spitting feathers after the latest debacle on Wearside.

* Spiers and Boden, Bellowhead and of course just about any other CD can be bought at the usual knockdown prices by clicking on Salut! Live's Amazon link

** Plenty of dates remain on the Spiers and Boden tour. Visit their site here.