Joan Baez in Marseille: no Farewell yet from this Angelina 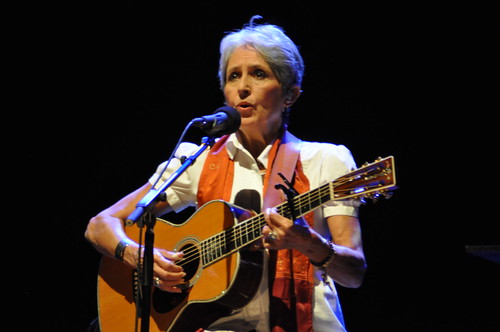 For anyone who has followed the link from Salut! Sunderland, I did wonder aloud whether the recent spat between Steve Bruce and our temperamental Argentinian defender justified changing the name of the song to Farewell Angeleri. Otherwise, this is for lovers of good music, whatever the genre ...

"I want your life!" said my young Canadian colleague, out in Abu Dhabi, in reply to a reminder of why I would not be available to work yesterday. "Or at least your concert tickets. In my mind, all the best music was written before 1979. And she was one of the best."

She? A trim, handsome but slightly hobbling woman of 70, in leggings, white top and red rust scarf. She has been singing with beauty and conviction for a lifetime and my pass-out from gainful employment coincided with her show at the Dôme theatre in Marseille, where the photo was taken, between concerts in Toulouse the night before and, after a day's break, Grenoble. Joan Baez on tour.

No, Joan did not sing this at the concert. But it probably my favourite example of her work

Marseille is one of my favourite cities. Irreverent, snappy, rebellious, at times violent, it is nevertheless as good an example as I know of a place where people from assorted origins, and with skins of different colours, rub along quite well.

On the Vieux Port in the warm afternoon sunshine, I walked past one bench where young Jewish boys in orthodox attire were snacking and then noticed the next one occupied entirely by Muslims with origins, I imagined, in the Maghreb. Yes, Marine Le Pen's Front National makes headway in these parts, but you don't expect to meet many of its faithful at a Joan Baez concert. Or, in one idealistic evaluation, a football match. "When we score blacks, Jews, Arabs and everyone else rises to their feet at the same time," said Antoine Bell, a Cameroonian goalkeeper who played for OM in the 1980s.

Le Dôme is not a venue the civic worthies believe in making too easy to find. "It'll be signposted, surely," my wife said to a waiter. "Pas tellement," came the reply, and he was not exaggerating. The SatNav battery was flat and it took a few false turns, and a shouted conversation through wound-down windows at traffic lights to get us there, the first sign not appearing until immediately before arrival.

France is suffering as much as other parts of the world in these economically charged times, but even the ticket prices of €50, €60 and €70 had not kept people away. The curtains were drawn to exclude the wings, but what was left was almost full. The sandwich and drinks bar was doing a brisk trade, too, despite two baguettes and Diet Cokes knocking you back another €16. 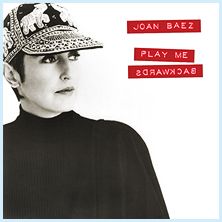 On stage in a pleasant, functional theatre (the Marseille Dome is minuscule by comparison with the London O2), Joan Baez walked slowly, and with that limp, to her stool. There was no support, just one backing musician, Dirk Powell, and frequent appearances on stage by Emma Vasseur, her young tour assistant, to change guitars. Powell made up for the lack of numbers by playing banjo, bass, piano and violin with equal effect as well as chipping in on vocals. Second thoughts on the equal effect: his short piano solos on Gracias a la vida and Imagine were exquisite.

To Donna, my ticket-coveting electronic correspondent in the UAE, I had said: "I'll be broken hearted if she doesn't sing the old Dylan stuff."

The heart survived. We heard an excellent Farewell Angelina, of course, and she also found time for a mellow Love is Just a Four-Letter Word and, in the encores, an oddly hesitant Blowing in the Wind. Sadly, no Don't Think Twice, It's All Right but it would be unreasonable to expect a woman who has recorded dozens of albums to sing everything from them in a concert of an hour and a half or so.

There was warmth from the audience and Baez sang clearly and, for the most part, purely throughout. One of the things that happens with advancing years is that you become forgetful; there was more than one fluffed note, vocally and on guitar, and she repeated the whisky stain verse in Phil Ochs's There But For Fortune.

She also claimed to have lost most of her French, but made the apology correctly and comprehensibly in the language of Molière, which she then continued to use whenever addressing the audience, injecting English only when the phrase or word escaped her. No one went home unaware that the limp, and occasional sign of discomfort, had resulted from a nasty fall from her treehouse in California. Five or six metres, no less. "Nearly healed," she reassured us.

At a time of conflict, and not too far from these shores, the familiar messages against war were pertinent and welcome. They included Serge Reggiani's Le Déserteur, one of two French-language songs Baez read from sheets, in which the young man writes to Monsieur le Président telling him why he will not go to battle.

Conscious of proximity, and perhaps also of the large Tunisian community in France's second city, she dedicated an a cappella song in Arabic to their uprising.

The enthusiasm of the audience's response suggested that Le Dôme was indeed, last night, an FN-free zone.

In London, I have seen Joan Baez play on a number of occasions with a procession of collaborating artists. This slimmed-down version of her spectacle seemed to suit her well, and so it suited the loudly appreciative audience. The trifling flaws simply made it a more human experience, with enough reminders of Baez's supreme vocal gifts, and of a heart in the right place, to send the Marseillais home contented.

If you are in France, try to catch her on one of the remaining dates, Grenoble tomorrow or back across the country in Clermont-Ferrand on Saturday, before she heads north to the Netherland and Scandinavia. Forget Dijon on Sunday; she's postponed that one until later in the year, which may or may not have anything to do with - from another of those introductions in French last night - her mother's 99th birthday. 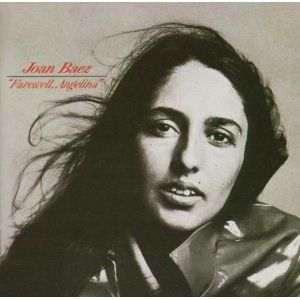 * The albums shown (including the most recent Baez CD, Play Me Backwards) and any others may be purchased via the Salut! page at Amazon by clicking this link) and navigating from there.


** With thanks from Salut! Live to Blair Woods, Joan Baez's tour manager, and Claire Horton at the Richard Wootton agency in London. And happy birthday, Mom.

Thanks so much for this vivid and beautifully written review/homage.

Certainly not “no farewell yet from this Angelina! Looking forward to her next UK visit.

Thank you for sharing this with us.
I enjoyed reading it!
Not only was it a review of a French concert in English...no auto translation, but a long, detailed, and beautifully written one at that!

And those of us who have been wondering for months about the details of
Joan's treehouse accident now know that she fell close to 20 feet -
yikes! No wonder the tweet she sent out at the time said it was a time
for rejoicing, a free-fall from that height could break a back or neck
or crack open a skull....

I was in marseille...She told that she fell from her tree-house after a night in it, in the morning...
Now she feels better...as she told me....Sometimes tired but it doesn't hurt her....
The concert was excellent. She finished with here's to you, with a standing ovation ans the public singing with her.

We've waited a long time for any details at all about her fall, thanks to all for passing along her comments. Can you imagine her simple, human EMBARRASSMENT at having fallen while doing something so familiar to her - and which means so much to her?!

Did anyone notice that, if you click the second link under the photo in Colin's review, you get to another review, in French - I believe by the photographer. It has the set list ("possibly a bit out of order"), and ALSO a "bonus video"- a piece of a song.

I have re-posted the above comments from a Joan Baez forum - http://launch.groups.yahoo.com/group/BaezFans/ - not only because it is nice to be praised (I did reassure Dave that I deserved no extra points for writing in my own language) but because it shows Salut! Live was not just wasting its time in reviewing the concert.