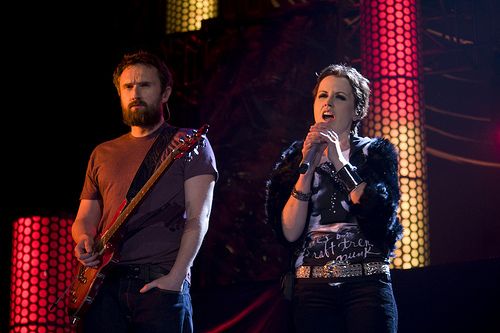 Why the Cranberries, at Salut! Live of all places? It's a variation of the question I find harder and harder to answer as the years go by.

What is folk? If we have been known to betray purist ideals in the past, but also approve of folk-rock, where do we now draw the line? There are degrees of commercialisation that come into play, but should not in reality affect the argument since everyone who sings or plays professionally does so a) because they can, and b) because they hope it will produce an income (whether their ambitions in that direction are to earn a living wage or a fortune).

These questions, which have caused many to reflect and pontificate, clearly deserve an article, if not an essay or even a book, of their own. For the purposes of this review of the Cranberries' concert in Nice, I shall therefore present one justification:


One of the countless things I love about Ireland is that the Irish, or large numbers of them, are completely open in their musical tastes. The Dubliner who has survived the extinction of the Celtic Tiger sufficiently to be able still to attend live gigs would cheerfully see the Cranberries, Christy Moore, the Killers, Sharon Shannon, U2, a reformed Bothy Band and Damien Dempsey on successive nights. It if it's good enough for them, why not for me - and Salut! Live?

Conscience out of the way, let's get on with the show.

I described the Cranberries at my football site Salut! Sunderland as a guilty secret. It's never seemed quite right for a folkie to like them. But I always have. I did not know when booking tickets for their concert at the Nikaia in Nice, two hours from where I am living, that it would mean not seeing England v Algeria on the box. It wouldn't have mattered anyway, since my attachment to international - as opposed to club - football is loose. In the event, by all accounts of the proceedings in South Africa, my choice on how to spend my Friday evening was an excellent one.

And it was a memorable gig. There was even good support, six or seven songs from a disconcertingly musclebound Australian, whose name I promise to find somewhere and add, with a strong voice, decent songs and impressive, attacking guitar style. The hall was already well over three-quarters full when he began, and remained so - something of a rarity, in UK terms, for the role ingrat fulfilled by the supporting artist, who often enough plays to an mostly empty hall with everyone else lingering in the bar.

The wait for the Cranberries was long, but worth it. Dolores O'Riordan fought at first to rise above the sound of her band, but soon succeeded. This was just as well because although the band is superb, it is O'Riordan's voice that introduces the essential ingredient that sets the Cranberries apart.

Not - reassuringly - as muscular as her Oz support act, O'Riordan is fit all the same, and performs with a striking mix of energy, passion, warmth and - at all times - apparent enjoyment.

My knowledge of the Cranberries' repertoire is limited. I have one, much-played album and much of what it contains - plus the other morceaux I know - was reproduced by the band in 90 minutes or more on stage in Nice. Zombies, Salvation, Free to Decide, Linger and Miss You were obvious crowd-pleasers. There were no duds, just an occasional sign that not all was well with the balance of the sound mix.

But O'Riordan at all times had the audience eating out of her hand. It was a strangely mixed crowd, from young children, typically girls, with parents to teenagers, thirtysomethings and people, like me, of advanced years. In a style mildly reminiscent of Maddy Prior's penchant for dancing in the aisles of Steeleye Span gigs, she descended from the stage to pass among the front ranks of standing fans, Her attempts to communicate in Limerick schoolgirl French simply added to the sense of complicité.

No reason, in the end, to feel any shame in admiring Dolores, whose vocal range is exceptional, and her fine accompanying musicians. It hardly matters how you categorise the music; this is a seriously good band, great live.

* Thanks to Alterna2 for the photo of Dolores O'Riordan in a previous Barcelona concert, completely consistent with how she looked and performed in Nice.

I don't think the important question is folk or pop or jazz or whatever - it's whether the music comes from the heart and soul of the performer or is merely a calculated manufactured object designed to boost their bank balance. Indeed, many of the performers I admire most tend to defy categorisation - they are just true to their muse.